The US international trade deficit widened to $42.6bn in October from $36.2bn in September, as exports fell for the first time since May and imports increased, reversing the decline in September. The trade deficit narrowed in Q3 to a near two-year low due to an outsized 10% annualized jump in exports, adding a massive 1.2pp to Q3 GDP growth, pushing it over 3% annualized (see Chart 1). 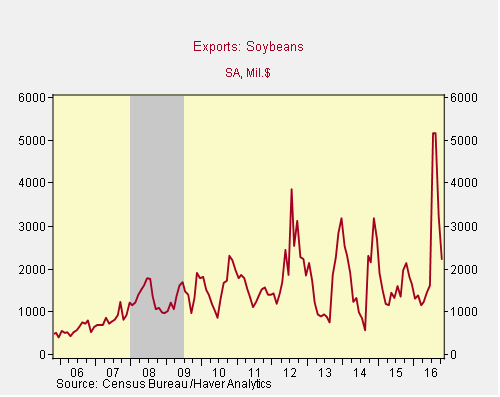 Excluding soybeans, exports remain soft but have been improving (see Chart 2). Soybean exports have already started to decline and have room to fall further this quarter. Assuming soybean exports return near prior levels and that other exports continue to improve at a solid pace, the drag to Q4 GDP growth from exports could be around 0.6 percentage points. 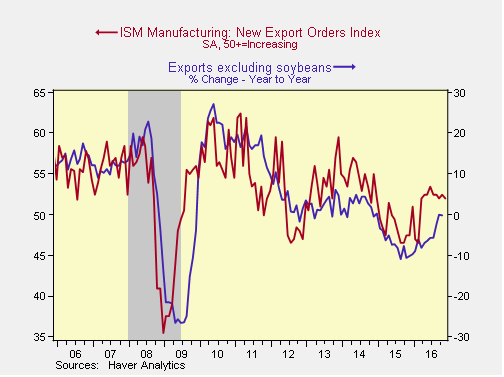 The underlying trend in domestic economic activity is likely to improve in Q4 and offset the anticipated widening of the net export deficit.  Final sales to domestic purchasers remains on track to rebound above 2 percent annualized after sub-2 percent growth in the prior quarters, led by personal consumption and residential fixed investment which is rebounding after disappointing declines this year.

Looking ahead, foreign trade is a wild card because of the stronger US dollar and uncertainties about the policies of the incoming Trump administration and how they may affect trade. For now, the expectation is that the boost in economic activity from likely tax reform, infrastructure spending and an easing of burdensome regulations will stimulate stronger economic growth while increasing the demand for foreign goods and widening the US foreign trade deficit (see “US: stronger growth, higher rates, more uncertainty” for a discussion of our revised economic forecasts).

An E-Commerce Boom This Holiday Season