The Bipartisan Policy Center’s Securing Our Financial Future offers a new set of recommendations to strengthen Americans’ retirement income security.  The full report can be found here and an executive summary here. A useful compendium of graphical information about the recommendations can be found here, and an affecting video on the financial challenges facing Americans can be viewed here.

The report was developed by the BPC’s 19-member Commission on Retirement Security and Personal Savings, co-chaired by former Senator Kent Conrad (D-ND) and Jim Lockhart, former principal deputy commissioner of the Social Security Administration (SSA).  I served as one of the commission members and was deeply impressed by the co-chairs’ leadership and process acumen, as well as by the other commission members and an exceptionally capable team of staff.

As the commission included experts holding a wide range of policy views, a consensus report was only possible because its work was relentlessly data-driven, and because the co-chairs skillfully incorporated  input from the entire commission to forge balanced compromise.  It is fashionable in political circles to characterize genuine compromise as containing something for everyone to dislike; a more accurate description in this case is that compromise would lead to far better results than either left or right would receive under the status quo.

The commission’s recommendations were organized into six main themes:

1)      Improve access to workplace retirement savings plans, largely by making it easier for employers to offer plans and to enroll workers in them, and by simplifying the decisions facing participants.

2)      Promote personal savings for short-term needs and preserve retirement savings for older age, largely by making it easier for workers to manage, shift and maintain savings between their various retirement accounts.

3)      Reduce the risk of outliving savings, largely by facilitating the offering of retirement plan distribution options that would provide income over a retiree’s full lifetime.

4)      Facilitate the use of home equity for retirement consumption, largely through the use of reverse mortgages.

5)      Improve financial capability among all Americans, largely by implementing the recommendations of the President’s Advisory Council on Financial Capability, and by clarifying the nomenclature used in key government programs such as Social Security.

6)      Strengthen Social Security’s finances and modernize the program, by balancing its income and expenditures, and by targeting its benefits more directly on needy households.

1)      The proposals would strengthen Social Security finances through a roughly 50/50 blend of changes to revenues and costs (per the Social Security Chief Actuary, 54% revenues vs. 46% cost containment).  Under current law, per Urban Institute projections, Social Security costs would rise from 4.8% of GDP today to roughly 6.2% of GDP by 2034 when the program’s combined trust funds would be depleted and benefits reduced by roughly 22%. Afterwards the financing gap would continue to grow, with eventual costs (6.4% of GDP) being only 73% funded by income (4.7% of GDP) at the end of the valuation period.  Under the commission proposals costs would instead rise more gradually to 5.8% of GDP (at the peak of baby boomer retirements in the mid-2030s) and stabilize thereafter, hovering around 5.5% of GDP for most of the mid-21st century.  The biggest revenue changes would be increases in the Social Security payroll tax rate (from 12.4% to 13.4%) and wage base (to $195,000 by 2020).  The biggest cost containment mechanism would be a gradual indexing of the normal retirement age to national longevity gains, rising by one month every two years starting in 2022.  Per convention this was counted by the commission as a benefit constraint although in practice, an individual receives higher annual benefits if he/she delays his/her initial benefit claim.  The second largest cost containment provision would be to link annual COLAs to the chained Consumer Price Index (C-CPI-U), so that they more closely track national price inflation.

Figure 1: After the Baby Boomers Retire, the Commission Proposals Would Stabilize Social Security Costs/Revenues as a Share of GDP 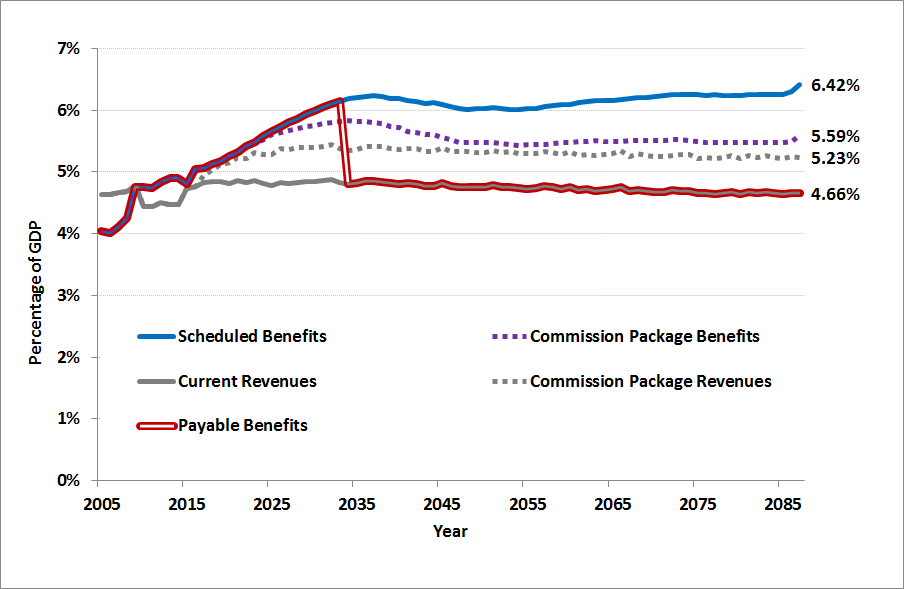 2)      Under the commission proposals, real per capita benefits would grow substantially.  Under current law, program costs would grow at rates beyond that which revenues can finance, resulting in sudden benefit reductions upon trust fund depletion.  Under the commission proposals individuals would be spared these benefit reductions, allowing seniors’ Social Security benefits and total disposable income to both grow steadily relative to price inflation.

Figure 2: Projected Average Disposable Income (in $2015) for Individuals 62 and Older 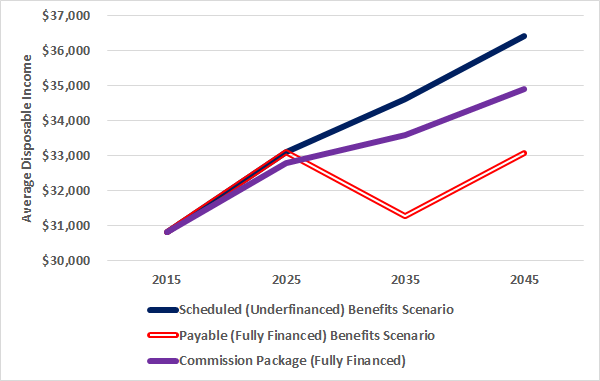 3)      The commission proposals would target benefit growth on low-income households and significantly reduce elderly poverty.  For example, a two-earner couple born in 1993, in the bottom income quintile, working for 40 years with equal earnings, would receive benefits 63% higher than could be paid under current law.  Those in the second income quintile would receive a 49% benefit increase.  Not only would these benefits be substantially higher than could be paid under current law, they are even higher (24% and 12% higher, respectively) than the current-law benefit formula that is significantly underfunded.  Because of this faster benefit growth for low-income households, senior poverty levels would be substantially lower under the commission proposals not only than under current law – but even relative to an imaginary scenario in which all of Social Security’s currently unfinanced benefits were somehow fully funded.

Figure 3: Senior Poverty Would Be Markedly Reduced Under the Commission Proposals 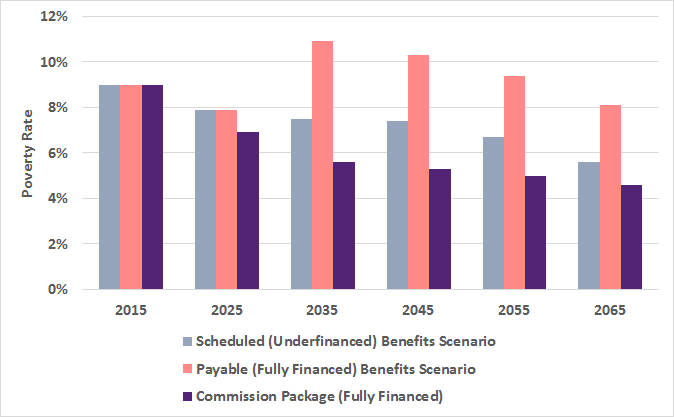 4)      Returns on work would be higher under the commission proposals.  It is often extremely difficult to design proposals that would provide substantial support for low-income individuals while also providing adequate returns as individuals engage in paid employment.  Figure 4, however, shows that throughout the income spectrum, individuals would receive larger increases under the proposals the more years that they work.  This is in sharp contrast with current law, in which returns on work decline dramatically for seniors, at precisely the point in their lives when they must make decisions as to whether to remain in the workforce.  The commission proposals would accomplish this by reforming the benefit formula to accrue benefits with additional years of work rather than basing benefit levels solely on career average earnings.

The BPC retirement security commission proposals reflect a roughly 50/50 compromise between left and right as to how to shore up the finances of Social Security.  All program participants would benefit from the stabilization of program finances, with the largest gains accruing to low-wage workers.

Interested in real economic insights? Want to stay ahead of the competition? Each weekday morning, E21 delivers a short email that includes E21 exclusive commentaries and the latest market news and updates from Washington.Sign up for the E21 Morning eBrief.