Earlier today, presidential candidate Sen. Elizabeth Warren released her proposal to ostensibly pay for the costs of Medicare for All (M4A) without raising taxes on the middle class. As published, the plan would not actually finance the costs of M4A. First, I will provide a top-line summary of the financing proposal. The remainder of this piece will provide additional details underlying the estimates. 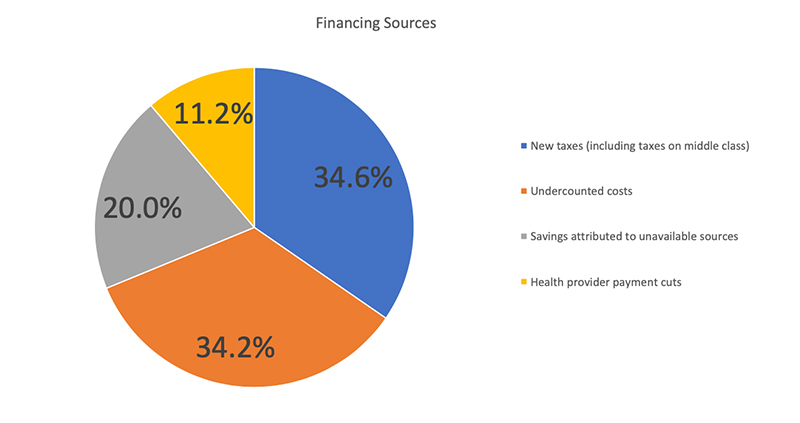 To summarize, the Warren proposal understates M4A’s costs, as quantified by multiple credible studies, by about 34.2%. Another 11.2% of the cost would be met by cutting payments to health providers such as physicians and hospitals. Approximately 20% of the financing is sought by tapping sources that are unavailable for various reasons, for example because she has already committed that funding to other priorities, or because the savings from them was already assumed in the top-line cost estimate. The remaining 34.6% would be met by an array of new and previous tax proposals, most of it consisting of new taxes affecting everyone now carrying employer-provided health insurance, including the middle class.

Here’s how the numbers break down.

The Costs of Medicare for All from 2020-29. My 2018 paper estimated the costs of M4A at $32.6-$38.0 trillion over 2022-31, depending on how provider payment rates were set. For 2020-29, the years covered in the Warren proposal, this range translates to $29.2-$33.9 trillion. My study, however, was of an earlier bill that lacked a long-term care benefit, unlike Sen. Warren’s plan. Correcting for the inclusion of long-term care produces a range of $32.9-$37.6 trillion. For this piece’s comparison purposes, $37.6 trillion is the best starting place, because the Warren proposal envisions a different provider payment rate structure than the one I analyzed. Only if we use $37.6 trillion as the starting point, can we quantify the amount of savings Sen. Warren aims to generate from provider payment cuts.

Provider Payment Cuts: A memorandum supplied by the Warren campaign indicates that under her proposal, physicians would be paid at Medicare rates, while hospitals would be paid at 110% of Medicare rates. These equate to immediate payment rate cuts of about 35% for hospitals and more than 25% for physicians relative to current private insurance rates, with the cuts growing more severe over time. Most analysts regard such cuts as unrealistic. Historically, Congress has repeatedly balked at much smaller cuts, as did the state of Washington earlier this year. Regardless, the rate cuts proposed by Sen. Warren total about $4.2 trillion over 10 years, reducing the estimated cost of her M4A plan from $37.6 trillion to $33.4 trillion.

Assuming Costs Away: The Warren campaign memorandum provides a cost estimate of $20.5 trillion over ten years, much lower than the accepted analytical consensus which includes my estimate as well as others from the Urban Institute, the Center for Health and Economy, the Rand Corporation and Ken Thorpe. In short, the Warren proposal simply assumes away more than one-third of the cost of M4A.

Specifically, the Warren campaign lowers the cost estimates via the following techniques:

Tapping Unavailable Financing Sources: To finance its artificially lowered cost estimate of $20.5 trillion, the Warren proposal names a number of financing sources. For various reasons, several of these are unavailable to provide financing. These include:

New Taxes, Including Middle Class Taxes: The Warren financing framework includes several taxes she has previously proposed, as well as other new taxes that would be felt by everyone (including those in the middle class) now carrying employer-provided health insurance. These include:

In sum, the Warren framework cannot fully finance Medicare for All because it does not acknowledge most of its costs. Over half of the purported financing is a mirage, consisting of either assuming away the costs (34.2%) or tapping financing sources that are unavailable (20.0%). This leaves less than half of the costs to receive realistic financing. Of the lesser portion of M4A that would be realistically financed, the predominant shares would come from taxes shouldered by middle-class workers who currently carry employer-sponsored health insurance, and from steep payment cuts affecting physicians and hospitals.