The Economy and Fed Policy Find the Sweet Spot

The U.S. economy has regained momentum after a spell of financial-market volatility sparked fears of a slowdown or even a recession late last year. Real GDP grew at a 3.2% annual rate in the first quarter of 2019, surprising many analysts who expected a much weaker report. The unemployment rate, at 3.6%, stands at its lowest level in nearly 50 years. And while inflation continues to fall below the Federal Reserve’s long-run 2% target, Fed Chair Jerome Powell emphasized at his May 1 press conference that he sees the latest price data as reflecting a variety of special factors, which he expects to be transient, rather than a sign that monetary policy has become overly restrictive.

The recent behavior of nominal GDP growth confirms all of these positive signals. Judged by this metric, the U.S. economy continues to gain strength, and Federal Reserve policy remains on track.

Nominal GDP measures, on a quarterly basis, the total dollar value of income earned by American workers and businesses. It also measures the dollar value of goods and services produced in the U.S. Nominal GDP growth can be broken down into two components: real GDP growth, measuring growth in the physical volume of goods and services produced in the U.S., and inflation, measuring the rate of change of prices. For two reasons, nominal GDP growth is particularly useful, today, for gauging how Fed policy is contributing to the overall health of the American economy.

First, nominal GDP is the most comprehensive measure of economic activity that the Federal Reserve can reliably influence. This is precisely because nominal GDP is a “nominal” variable—one that is measured in units of dollars. When Fed policy becomes too accommodative, excessive money growth causes the economy to “overheat,” that is, to grow in the short run at a rate that is faster than its long-run potential. Subsequently, inflation begins to rise. Thus, over both short and long horizons, inappropriately expansionary monetary policy generates an acceleration in nominal GDP growth. Conversely, when Fed policy is too restrictive, real economic growth slows in the short run and inflation falls with a lag. Inappropriately tight monetary policy thereby generates a decline in nominal GDP growth. In between these two extremes, stable nominal GDP growth signals that Fed policy is right on track: neither too easy nor too tight.

Second, while nominal GDP captures the effects that monetary policy has on the economy over both short and long horizons, it does so without reference to the Phillips curve, which attempts to describe in more detail how changes in output and employment in the short run translate into changes in inflation in the long run. The problem with the Phillips curve is that it associates lower rates of unemployment with higher rates of inflation. Today, however, unemployment stands at a 50-year low yet inflation is falling, not rising. The Phillips curve might be useful for understanding other historical episodes, but presently, it is not serving as a good guide for evaluating Fed policy.

The nearby chart shows the behavior of nominal GDP growth in the U.S. from the late 1950s through the present day. To smooth out very short-run fluctuations and highlight medium and longer-term developments, the graph plots, for each quarter year, the annualized percentage change over the previous two years; in a recent paper, economist James Hamilton suggests that eight-quarter growth rates usefully describe, in a simple and robust way, the cyclical behavior of many economic time series. Shaded areas in the graph indicate periods of recession, as identified by the National Bureau of Economic Research. 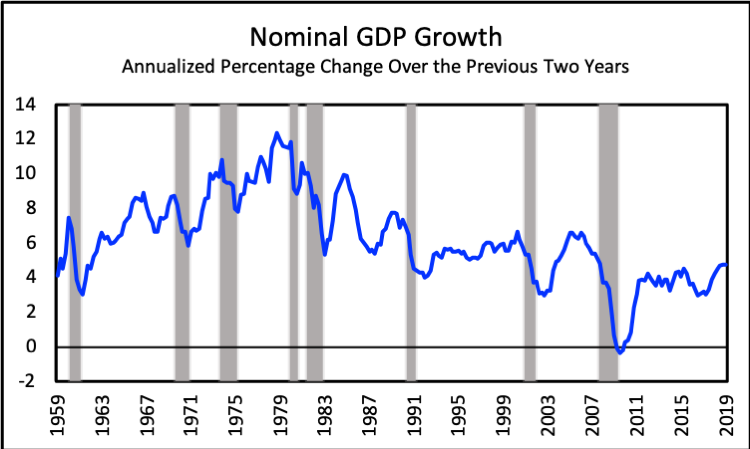 Consistent with the notion that nominal GDP growth communicates valuable information about the Fed’s role in shaping American economic performance, the graph distinguishes clearly between contrasting episodes of U.S. economic history. The graph shows, for example, that nominal GDP growth followed a volatile upward trend throughout the 1960s and 1970s. During this period, Fed policy was characterized by an erratic “stop-go” pattern according to which periods of monetary restraint contributed to recessions in 1969-70 and 1973-75, but were then followed by longer periods of monetary expansion that drove inflation relentlessly higher.

Nominal GDP growth declined sharply in the 1980s, as the Fed finally exercised sufficient resolve to bring inflation back under control under Chair Paul Volcker. The 1990s appear in the graph as a period of exceptional stability in nominal GDP growth, reflecting the Fed’s success in creating and maintaining an environment of low inflation most conducive to steady growth in real GDP as well. Volatility in nominal GDP growth returned, however, beginning in 2000 and culminating in the financial crisis of 2007-08 and the severe recession that followed.

Following a period of slower growth from 2011-16, nominal GDP has accelerated noticeably since 2017, returning to rates more typical of those experienced prior to the financial crisis. Over the three most recent quarters, in fact, nominal GDP growth appears to have stabilized at a 4.75% annual rate. If sustained, this figure is consistent with healthy, 2.75% growth in real GDP as inflation returns to the Fed’s 2% target.

Importantly, nominal GDP growth shows no signs of faltering, as it would if the economy was about to fall into recession. Nor does it appear to be moving sharply higher, as it would if the Fed was losing control of inflation. Readings from this key indicator confirm that the U.S. economy continues to grow at a healthy rate, and that Fed policy remains supportive of a sustainable long-term expansion.