Inflation and Authoritarianism are Behind Turkey’s Financial Crisis

The negative effects of President Recep Tayipp Erdogan’s misguided economic policies and increasingly authoritarian rule over Turkey are mounting. They threaten economic and financial performance and are now jarring international financial markets. The root causes of the dramatic deterioration of the Turkish lira and financial crisis are soaring inflation and a dangerously high current account deficit that have resulted from aggressively easy monetary policy.

According to the Turkish Statistical Institute, inflation has accelerated over 26% annualized in the last four months compared to 7.8% in 2016, 11.1% in 2017 and 16% year-over-year through July. Meanwhile, unofficial black market estimates of inflation based on surveys of high frequency data on an array of goods and services are more than double the official data. 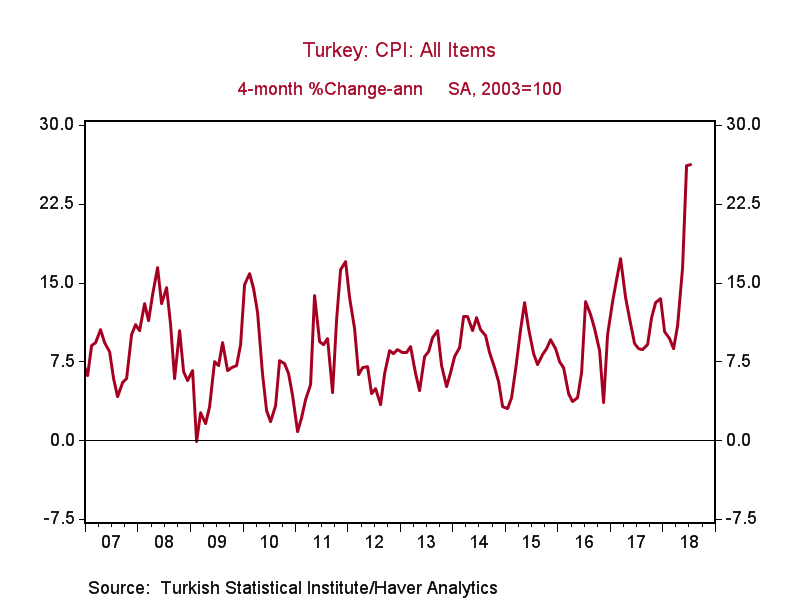 The official inflation target of the Central Bank of Turkey (CBT) is 5%.  Expectations of high and rising inflation are becoming embedded in finance and the economy. Bond yields have risen to alarming levels and households and businesses are being forced to change their behavior.  Inflation has long been a major thorn in Turkey’s economic performance; it has averaged over 20% in each of the last four full decades.

The source of this high and rising inflation is the CBT’s monetary policy. Money supply has been rising over 20% per year, while the rapid increases in inflationary expectations and interest rates--bond yields across durations exceed 20%--are reducing the demand for money and generating accelerating money velocity and nominal GDP. Consistent with this aggressive monetary expansion, year-over-year consumer loan growth has accelerated to 18% and loans by investment and development banks have risen 40%. 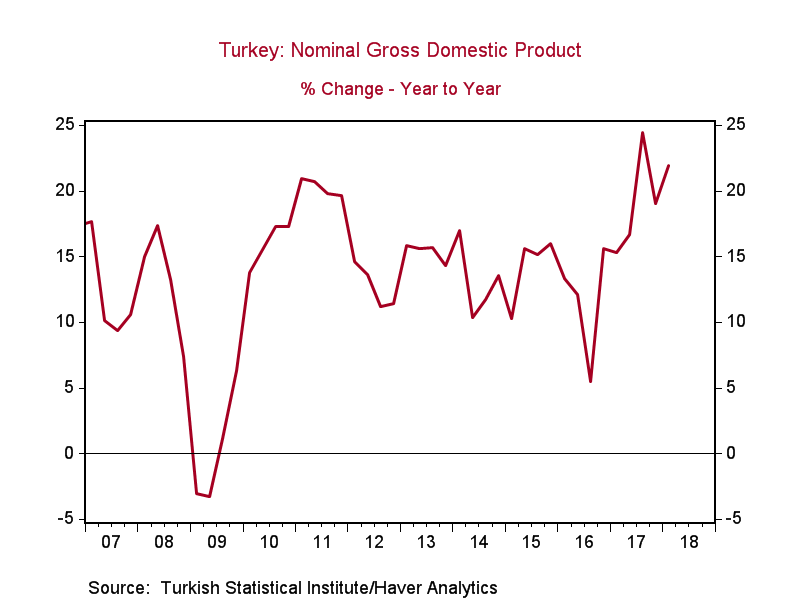 In mid-May President Erdogan, who detests the high interest rates imposed by the central bank, announced that he was taking control of the CBT. The CBT raised rates to 17.75% at its scheduled June 7 meeting, but the increase was not enough to constrain inflation or inflationary expectations. Financial markets were disappointed, bond yields rose and the lira fell. On July 24, the CBT held its first meeting after Erdogan was re-elected with new executive powers, and left its benchmark rate unchanged at 17.75%. This shocked financial markets and sent the lira plummeting and bond yields soaring.

Turkish fiscal policies have exacerbated the problem, but only modestly. The Turkish economy has been growing rapidly—in recent years its growth has been the fastest among all NATO nations. This is fueling big increases in the government’s tax receipts, which have risen 18% in the last year. The Erdogan Administration has ramped up government spending by roughly the same amount, particularly on pet projects like a new airport and a new channel to bypass the Bosporus Strait. Nevertheless, the budget deficit in 2018 will be roughly 2% of GDP, only modestly higher than 2017.

The Turkish lira has fallen 66% versus the U.S. dollar since Erdogan became President in August 2014. Since May 14, when Erdogan announced that he was taking control of the Central Bank of Turkey, the lira has fallen over 30%. The fall in the lira reflects the inflationary policies of the Erdogan Administration and associated challenges posed by the very large current account deficit. Foreigners are aggressively reducing their holdings of Turkish bonds and lira-denominated assets. 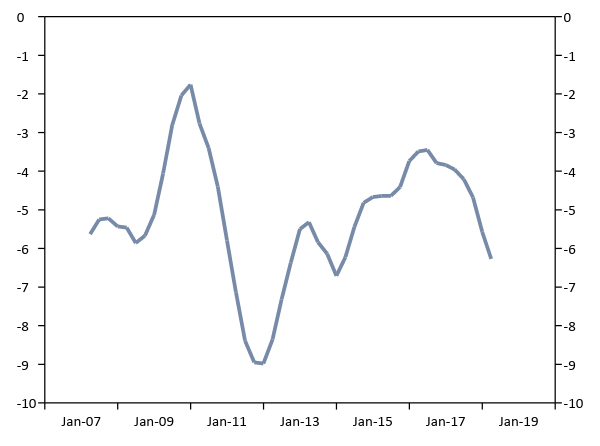 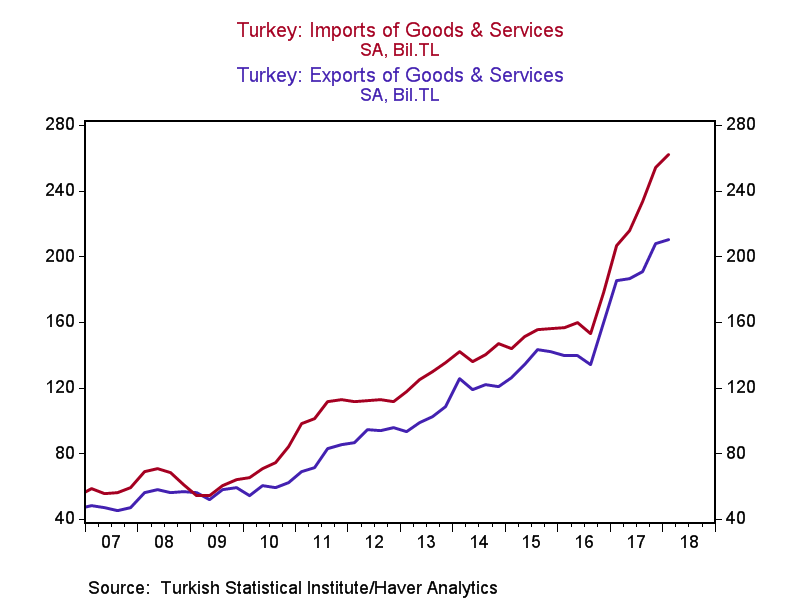 By the end of 2017, Turkey’s corporate foreign currency debt had increased to $450 billion, and $214 billion net of foreign exchange assets, a doubling since 2009. As of April 2018, $182 billion of Turkey’s external debt (public plus private) was due to mature within the next two and a half years, according to the CBT.  Rolling that debt at dramatically higher rates would be very painful financially.

In light of these recent developments, President Trump’s doubling of steel tariffs on Turkey is unnecessary, vindictive, and an inappropriate use of trade policy as a diplomatic lever. While its direct economic impact is tiny, it has exacerbated the decline in the Turkish lira and draws attention to the embattled Erdogan and Turkey’s economic policy and financial crisis.

Insofar as Turkey’s financial crisis is home-grown, its resolution is best resolved from within. The clear solution is for the Central Bank of Turkey to pursue a credible low inflation monetary policy. In order to drive down inflationary expectations—which would lower bond yields and prop up the lira-- the CBT must be credible.Accomplishing that is more difficult with Erdogan controlling the central bank.

Professor Steve Henke has urged Turkey to adopt a currency board in which the CBT’s monetary policy effectively would be tied to the monetary policy of a chosen central bank that is pursuing low inflation.Such a currency board has been successfully implemented in dozens of emerging nations, but for Turkey to take this approach would require Erdogan’s approval, which is highly unlikely.

Another path to lessen the financial crisis would involve re-establishing the independence of the central bank and appointing a credible leader to run it. Such a move by Erdogan--and follow through by the CBT to tighten monetary policy--would generate a sharp decline in Turkish bond yields and appreciation of the lira. Erdogan can learn from Russia: while President Putin controls many facets of the economy, he supports the Central Bank of Russia, which pursues a low inflation monetary policy. Replacing Erdogan’s son-in-law as Finance Minister obviously would be a step in the right direction.

On the flip side, seeking international help to ease Turkey’s financial crisis would be messy and ineffective. The EU and EMU would like to minimize their involvement in helping to patch up Turkey’s financial problems, and relying on an IMF bailout is a pipedream: neither the ECB nor the EU want the IMF to get dragged into the issue, and the IMF itself would prefer to stay out of it. Even if the IMF were part of a Turkish bailout, it would require Turkey to pursue a low inflation monetary policy, which simply gets us back to Turkey’s root problem.

Ultimately, the most likely outcome is that Erdogan will do what’s best for Erdogan. Market pressures will force him to “do what it takes to bring down inflation,” which means aggressive central bank rate increases.  Since Turkey’s acceleration of inflation has been relatively recent, aggressive and persistent rate increases would be successful. On the other hand, a lesser but far more dangerous probability is that Erdogan will have the CBT continue an excessively easy monetary policy, and will attempt to address the high inflation and negative financial consequences by imposing capital controls and government regulations. That would generate more downside and international financial spillover.