The myriad deregulatory actions of the Trump administration are generating considerable cost savings, savings that even conservative critics of regulatory overreach are underestimating. Like the Grand Canyon, the vast scale of these deregulatory efforts (and their results) is hard to fathom.

In just three years the administration has reversed hundreds of regulations, many of which drone on for hundreds of pages. And it’s done so without fear or favor. Many of the regulations reversed had been written and implemented at the behest of special interests, including large banks, trial lawyers, major health insurance companies, big tech companies, labor unions, and foreign drug manufacturers.

Even officials within the administration underestimate what has been achieved because they tend to grasp only their specific part of the overall picture. Still, I’ve been surprised to see a group of conservatives confidently conclude that the Trump administration “has achieved little” on deregulation. This, sadly, is akin to a human being encountering the immensity of the Grand Canyon only to conclude that it is “just a ditch.”

The daily grind of repealing excessive regulation does not always grab headlines. I don’t blame commentators for being unaware of some, or even most, of the deregulation that has occurred. That is why the Council of Economic Advisers (CEA)—where, until recently, I served as chief economist—dedicated a great deal of manpower preparing a comprehensive and rigorous assessment of deregulation since 2017. That report, released in June, concluded that the past three years of deregulation is comparable to, and probably exceeds, any deregulatory episode in modern U.S. history. That includes the historic deregulations of airlines, trucking, railroads, and energy that were initiated during the Carter administration.

Argue with the CEA report, if you want. Or read David R. Henderson’s summary of the report. But don’t claim that the Grand Canyon is a just a ditch until you have a cursory look at the CEA’s map.

The CEA began with the surprisingly difficult task of identifying the deregulations that were reducing household and business costs the most. You would think that government numbers could be used to make this assessment, but they are notoriously inaccurate. A Competitive Enterprise Institute study of the 53,838 federal rules finalized between 2001 and 2014 found that only 246 of them (less than 1%) quantified regulatory costs. Lurking in the other 53,592 are some very costly regulations to be discovered by some other method.

Instead, the CEA selected the top 21 regulations based on measures of attention from the public, as expressed by actions in Congress or comments submitted to the regulatory agency during the regulatory process. The CEA then performed a rigorous economic analysis of the selected regulations to estimate their costs. The arithmetic motivating this procedure is that a sum of the hundreds of costs savings (the entire deregulatory portfolio) is made up largely by the elements of the sum of cost savings from the regulations with the largest costs.

The attention metric led to some interesting discoveries. Take the 2016 prohibition of “junk” health insurance plans (i.e., plans that families like and purchase, in large part because the plans are cheaper than the plans endorsed by bureaucrats) that the Trump administration reversed in 2018. Whereas the typical regulation receives zero comments, this one received thousands. At the same time, the regulators assessed no cost for the rule because the rule was (with a bit of circularity) designated to be “economically insignificant.” Such designation is not supposed to be used unless there is no material adverse effect on a sector of the economy. It is absurd to deny any material adverse effect from a prohibition of a product that two million people would be purchasing (as estimated by the nonpartisan Congressional Budget Office). The CEA estimated that the annual cost of this regulation was $13 billion, which is 130 times the monetary threshold for “economic significance.”

It’s hard to understand the intention of the regulators who designated the rule to be “economically insignificant.” Were they unaware that the rule was getting thousands of comments? Did they think that people bothered to comment on something insignificant? Was it a technical error? Or was it a deliberate attempt to jam through a regulation without revealing much about its costs? Regardless of which answer is correct, we have yet another reason to doubt the cost estimates provided by regulatory agencies.

A similar phenomenon is revealed in the chart below, reproduced from another CEA report on prescription drug prices. It shows something historically unusual happening to prescription drug prices, as measured by the Consumer Price Index calculated by the Bureau of Labor Statistics. Much of the change has to do with deregulation of the entry of generic drugs. The Food and Drug Administration had such a burdensome approval process for generic manufacturers that in some instances only one company was making a generic. A handful of lucky, or well connected, companies were able to sell a drug they did not invent at a price about as high as that charged when the inventor held the monopoly. President Trump’s FDA changed that. 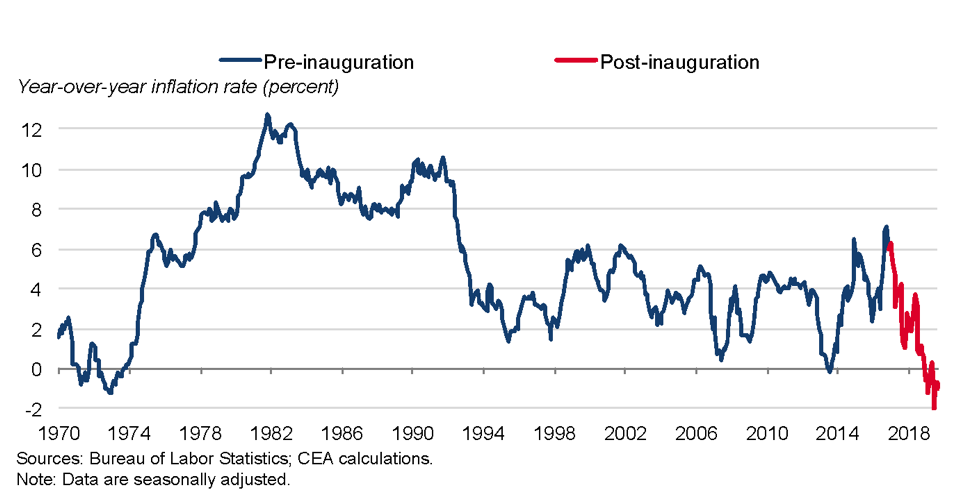 A little arithmetic helps to assess orders of magnitude (CEA calculations are much more detailed). If prescription drug prices had continued to increase at 4% per year after 2016, that would put them 8% higher after two years. In fact, after deregulation, they fell about 2% over two years, and therefore were roughly 10% below the previous trend. With the average household spending about $2,700 annually on prescriptions—including the taxes they pay to support government programs purchasing prescriptions—that is an annual savings of $270 per household.

These examples, repealing the costly regulation of generic drugs and health insurance, are but two of many such efforts by the Trump administration since 2017. This paragraph, from the CEA report’s conclusion, gives a sense for the broad swath of deregulation:

Since 2017, consumers and small businesses have been able to live and work with more choice and less Federal government interference. They can purchase health insurance in groups or as individuals without paying for categories of coverage that they do not want or need. Small businesses can design compensation packages that meet the needs of their employees, enter into a genuine franchise relationship with a larger corporation, or seek confidential professional advice on the organization of their workplaces. Consumers have a variety of choices as to less expensive wireless and wired Internet access. Small banks are no longer treated as “too big to fail” (they never were) and subject to the costly regulatory scrutiny that goes with that designation.

All told, the CEA report estimates that over the next five to 10 years, the deregulatory efforts of the Trump administration will increase annual real incomes in the United States by $3,100 per household.

Casey B. Mulligan, former chief economist at the Council of Economic Advisers (2018-2019) and a professor of economics at the University of Chicago, is the author of The Redistribution Recession: How Labor Market Distortions Contracted the Economy.