What’s Behind Falling Productivity: The Census May Hold the Answer

Why does it seem like America has gotten slower, not faster, at tackling large-scale projects – from building New York’s decades-delayed Second Avenue subway to responding to the threat of coronavirus? The decennial census may hold a clue.

Beginning on March 12, most Americans will receive instructions on how to respond to the 2020 census, and for the first time filling out an online survey will be an option.

The census has occurred every ten years since 1790, when James Madison’s innovative methods allowed just 650 census takers to count a population of almost four million, an astounding feat.[1] Records kept since 1940 tell a contrasting story: even as the census has introduced labor-saving technologies, it has required more, not fewer, workers. The efficiency of census-taking appears to have declined over time as it has for most of the economy. Economists have raised the alarm that productivity growth has slowed across the US economy. Tyler Cowen’s book The Great Stagnation argues, contrary to popular wisdom, that technology is advancing more slowly than in the past. Robert Gordon has identified six “headwinds” that will, he predicts, continue to hold back productivity growth.

Tech entrepreneur Patrick Collison colorfully describes a brief list of things that were fast: the construction of the original New York subway (4.7 years), the Empire State Building (410 days), Disneyland (366 days), and more. The old Census Office was a rapid innovator, too: it adopted a new electrical tabulating machine for the 1890 census after holding a contest.[2] But “fast” is over.

The census is something of an experiment in labor productivity. It takes a large, diverse group of Americans and assigns them a simple task to perform after only a brief period of training. For a paper that has been accepted by the IZA Journal of Labor Policy, I combed historical sources to build a novel database of the number of people employed by censuses in several countries.

In the US, the number of census takers, or “enumerators,” has risen faster than the population: from 1940 to 1970, there was slightly less than one enumerator per thousand people counted, but in 2000 and 2010, the intensity of census employment was just below two enumerators per thousand. The rise in the intensity of US census employment since 1970 is quite surprising because the census has steadily introduced labor-saving technology during that period.

In 1950, census employees knocked on every door and conducted an interview.[3]  If no one was at home, the census taker had to keep coming back until the interview was completed. Other census employees in Washington and Philadelphia then spent the summer and fall months transcribing the surveys onto computer-readable punch cards. The whole process was demanding and inefficient. The Census Bureau wrote in 1966 that:

it appeared that the great complexity of their jobs…had led to insufficient emphasis on some of the more important aspects of the  coverage and content of the censuses… there might have been as much as 2 or 3 percent net underenumeration of population and housing units in the 1950 censuses.[4]

For this reason, in 1960, advance surveys were delivered by mail, and census takers could simply pick up completed surveys, yielding a major time savings. Census employees then transcribed the questionnaire by hand onto another sheet that could be read by FOSDIC (Film Optical Sensing Device for Input to Computers).

For the 1970 and subsequent censuses, the Postal Service took on an even greater role. Most households received a machine-readable survey by mail and returned it the same way.[5] This cut out two labor- intensive processes: canvassing most households and transcribing data by hand. Censuses since 1970 have generally followed the same process. The biggest change was that the 2010 survey dropped the “long-form” census – a major labor-saving change that nevertheless did not have an obvious impact on the amount of labor expended.

Despite the introduction of labor-saving technologies, the Census hires more people relative to the population than it did in earlier periods. In 1950, 46 million households – the entire country – were canvassed by 170,000 field staff.[6] In 2000, 45 million addressees failed to mail back the survey, and the Census Bureau hired 539,000 field staff to take on the task of nonresponse follow-up.[7] What seems like basically the same task took three times as many employees. 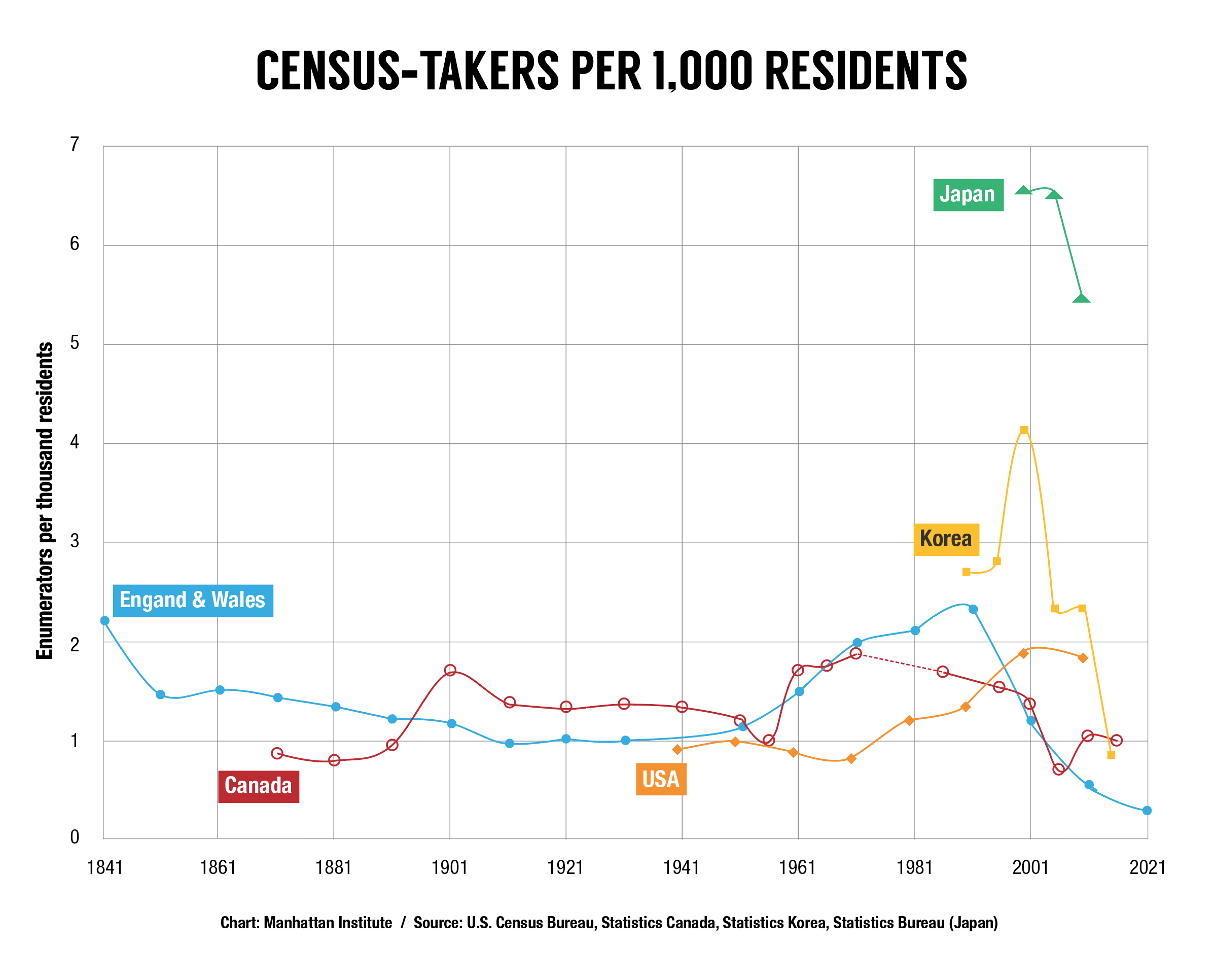 There are several possible causes for this threefold decline in per-worker efficiency.

The data processing side of the Census is not counterbalancing the declining personal interview efficiency; Steven Ruggles and Diana Magnuson show that a series of badly managed private contracts made the 2000 and 2010 census far more costly than 20th-century efforts.[9]

There are no easy answers to America’s decline in productivity growth. Based on the experience with the Census, it could be the economy has undergone big structural changes that make productivity gains harder, or that perhaps with more data we have higher standards for how we define success. But at least in the case of the census, regular Americans can help – by responding promptly and correctly to the census survey that will arrive in a few days.

Salim Furth, Ph.D., is a Senior Research Fellow at the Mercatus Center at George Mason University and the co-director of its Urbanity Project.

[5] In rural areas without house and street numbers, census employees delivered the surveys.

[7] In 2000, there were almost twice as many field jobs for “Nonresponse Follow-up” as for all the other categories of census jobs combined. U.S. Bureau of the Census, History: 2000 Census of Population and Housing, U.S. Government Printing Office, Washington, DC, 2009, p. 233.