How the Government Subsidized Our Opioid Addiction

In both 2015 and 2016, U.S. life expectancy fell from the previous year. A single-year drop had not happened in 22 years, and two consecutive drops had not occurred in more than 50 years. This sharp reversal in the national trend toward longer lives is widely understood to be connected to the opioid epidemic that began in the 1990s. The best kept secret about the epidemic, however, is how much of it – arguably most of it – resulted from Federal policy changes initiated by both Democrats and Republicans.

Opioids include prescription drugs like oxycodone as well as illicitly manufactured drugs like heroin and fentanyl. Since 2000, the Federal government has increased subsidies on both types of opioids and cut taxes on illicit opioids.

Medical professional organizations like the American Pain Society have been criticized for recommending more aggressive opioid prescription practices and downplaying addiction risks. But the effects of their recommendations would have been less severe without the Federal dollars that supported them. Beginning in 2000, the Veterans Health Administration (part of the Federal government) mandated that pain be seen as “the 5th Vital Sign,” which meant that pain would be routinely screened for and documented primarily based on patient self-assessments. Years later, the new Secretary of Veterans Affairs would report that veterans were twice as likely to die from opioid overdose than the general population.

This new approach would soon enter into civilian practice too, with three phases of financial encouragement from the Centers for Medicare and Medicaid Services. CMS has long conditioned hospital reimbursement under its massive Medicare and Medicaid programs on hospital quality assessments by the Joint Commission on Accreditation of Healthcare Organizations, another accreditation organization, or state survey agencies. In 2001, pain management became part of the accreditation process, putting billions of CMS dollars at stake. The second phase of incentives began in 2007, when CMS began withholding two percent from full reimbursement if a hospital failed to participate in the patient survey known as HCAHPS; hospitals and doctors discovered that their performance on the survey improved if opioids were liberally prescribed. The third phase began in 2012, when CMS implemented the “valued-based purchasing” (VBP) requirement provided for by the Affordable Care Act, which tied hospital reimbursement even more strongly to the HCAHPS survey. CMS would spend the next seven years taking steps to reduce these financial incentives for aggressive opioid prescribing.

Federal subsidies benefiting opioid consumers were probably even larger. In 2006, Medicare began to cover prescription drugs pursuant to its new “Part D” program. Although most Medicare enrollees are elderly, many of their prescriptions ended up in the hands of nonelderly people. Citing a family physician from Ohio, Sam Quinones’s book Dreamland asserts that “seniors realized they could subsidize their retirement by selling their prescription Oxys [a potent opioid] to younger folks. Some of the first Oxy dealers, in fact, were seniors who saw the value of the pills in their cabinets. ‘It’s like hitting the Lotto if your doctor will put you on OxyContin…. People don’t even think twice about selling.’” The White House Council of Economic Advisors (CEA) estimates that three-fourths of the growth in prescribed opioids between 2001 and 2010 were financed by government programs.

The 2010 Affordable Care Act requires health plans (especially Medicare) to cover “benzos” – prescription tranquilizers like Valium and Xanax. Benzos are part of the opioid crisis because they are the other half of the risky opioid-benzo cocktail that is favored by many opioid abusers. The tranquilizers enhance the feelings connected to opioid consumption, including the consumption of heroin and fentanyl. In other words, unlike the 2006 Medicare subsidies, which apply only to prescription opioids, the ACA’s benzo subsidies increase the demand for illicit opioids.

In 2013, Attorney General Eric Holder took a step toward ending the war on drugs by instructing Federal attorneys that they should not prosecute low-level drug offenders. As I explain in my recent paper, this amounts to a tax cut on illicit opioids that would presumably reduce their street prices.

As far as I can tell, these policies went ahead because much of the Federal government did not grasp the full extent of the opioid epidemic. The Federal Register (the daily publication of US government agencies), reveals the Federal priorities at the time. Every 10,000 pages published between 2009 and 2016 had only six documents mentioning “opioid,” “opioids,” or “opiate.” In contrast, the same 10,000 pages had nearly 40 documents mentioning “climate change.” As recently as 2013 – the third consecutive year in which the death rate was almost triple normal levels – the Congressional Record mentions “climate change” 27 times more often than “opioid” or “opioids.”

Regardless of whether the government increases subsidies or cuts taxes, the result is lower prices paid by the opioid consumer, making opioid addiction more affordable. The CEA’s recently released 2020 Economic Report of the President estimates that, adjusted for inflation, out-of-pocket prices for prescription opioids fell by a factor of five between 2001 and 2010. (CEA’s price data is graphed below.) More recently, the quality-adjusted price of illicit opioids fell by at least a factor of two. 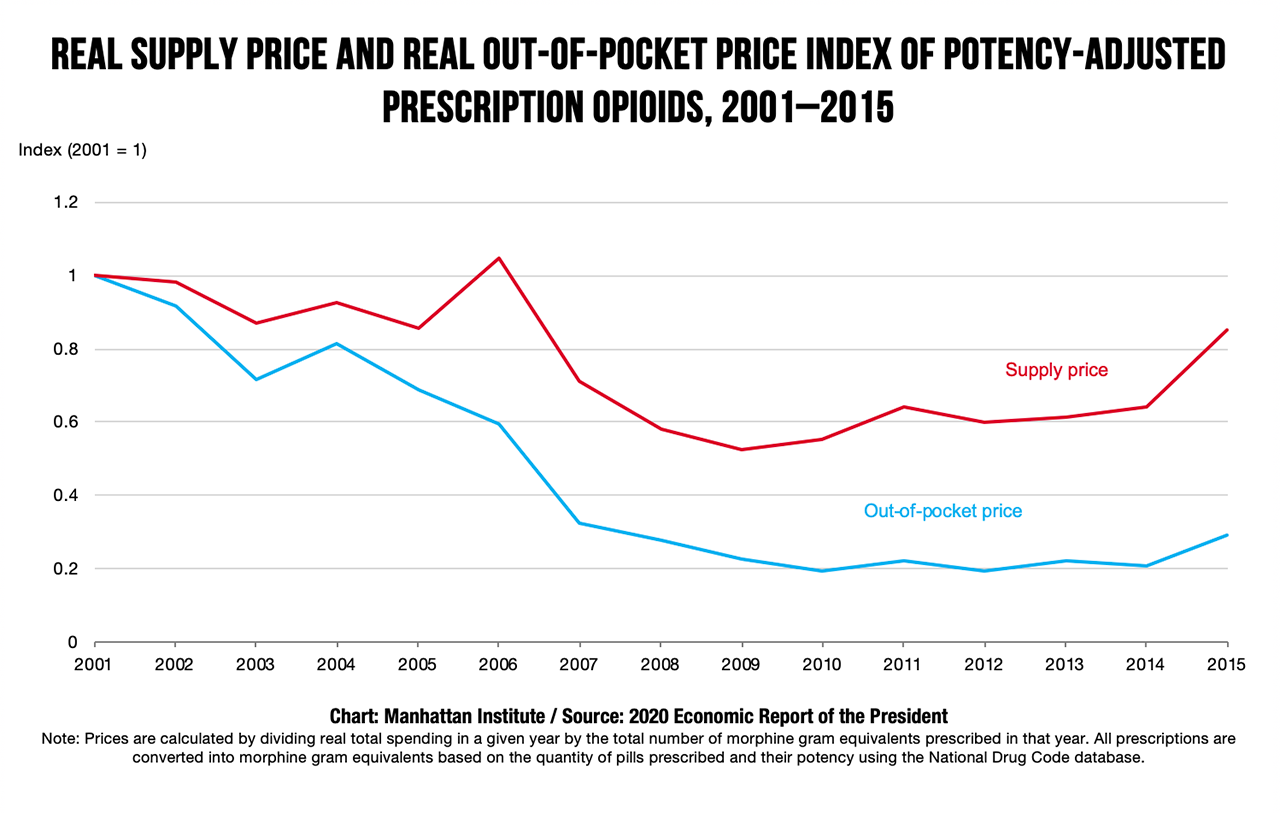 Studies have shown that opioids and other addictive substances obey the law of demand: lower prices mean more demand. If nothing else, the reduced prices for opioids have sharply increased the number of people who can afford an opioid addiction. CEA estimates that lower prescription opioid prices explain 31 to 83 percent of the increase in the death rate from 2001 to 2010 involving prescription opioids. This estimate does not include the additional effects of subsidies for benzos or hospitals, or the effects of reduced heroin prices since 2010.

Without the new subsidies supporting opioid addiction, the number of fatalities from opioid overdoses would be significantly lower, and maybe it wouldn’t even be called an “epidemic.”

Casey B. Mulligan, former chief economist at the Council of Economic Advisers (2018-2019) and a professor of economics at the University of Chicago, is the author of The Redistribution Recession: How Labor Market Distortions Contracted the Economy.