For every complicated problem there is an answer that is clear, simple—and wrong. When it comes to financing the future of Social Security, many Democrats have a simple and wrong solution: lift the cap on earnings subject to the payroll tax. Currently, taxes that finance Social Security apply only to the first $137,700 of earnings. This means that higher earners—about 6% of the US population—pay a lower payroll tax rate on their earnings. This has led many Democrats, including several presidential candidates (even relative moderates Amy Klobuchar and Joe Biden), to advocate for either eliminating the cap entirely by applying the 12.4% tax rate to all earnings or applying the tax to earnings above $250,000, exempting earnings between $138K and $250K.

But there are costs to these plans. A 12.4% marginal tax increase is significant. If the cap is eliminated, an individual who makes $250,000 a year would see their Social Security tax liability increase by 88%. As several commenters have pointed out, many households—especially those in states with high state taxes—will be paying more than 60% in federal, state, and local income and payroll taxes, which leaves little room to raise revenue for other programs. This may appear to not matter, since only 6% of the population earns more than the cap. But income varies over people’s lives: 36% of Americans will be in the top 5% of earners at least one year of their career.

What’s more, Social Security taxes are not as regressive as they appear. The program is meant to be both a retirement savings scheme that provides meaningful income to most households while redistributing income to poorer families. The higher your income and the more you contribute, the less you get back in benefits as a share of your income. A low-earning couple born in 1985 gets about $2.15 for every $1 they give to Social Security, while a high-earning couple gets about $0.99. Once you account for benefits paid, the tax is not regressive. Yet, support for the program remains high, despite the associated taxes, because benefits are a critical part of many household’s retirement income.

This raises a critical question: Would eliminating the cap result in larger benefits for higher earners? If so, then eliminating the cap would not restore solvency to Social Security. The Social Security Administration estimates the trust fund will run out by 2064 if the tax is eliminated and benefits increased. Eliminating the cap without increasing benefits for higher earners would postpone the exhaustion of the trust fund until 2078. But by increasing taxes and not benefits, we would be changing the nature of the program—making it more of a social insurance program and less of a nationalized retirement savings program. 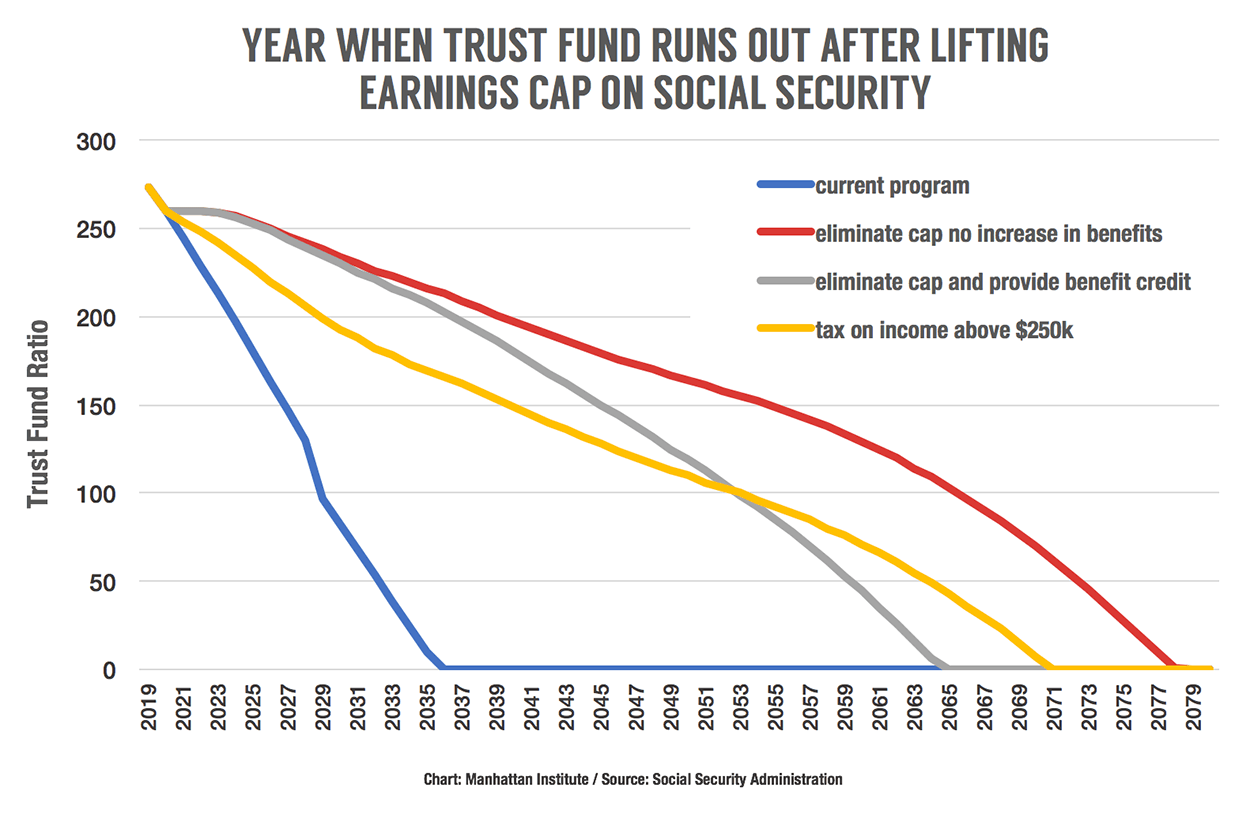 Increasing the earnings cap is no magic bullet. It does not restore solvency and is a large tax increase for many families, which leaves few other sources of revenue. There is no getting around the fact that paying for retirement will be more complicated and require most people to pay more and for some to get less.

Allison Schrager is a senior fellow at the Manhattan Institute.