New York City’s housing crunch is fundamentally a reflection of the city’s extraordinary success in generating jobs, contrasted with its inability to produce new housing to match the demand generated by its workers. New York’s Department of Labor recently released the annual average employment numbers for 2019, allowing us to make a rough calculation of how much the jobs-housing mismatch increased over the past decade. 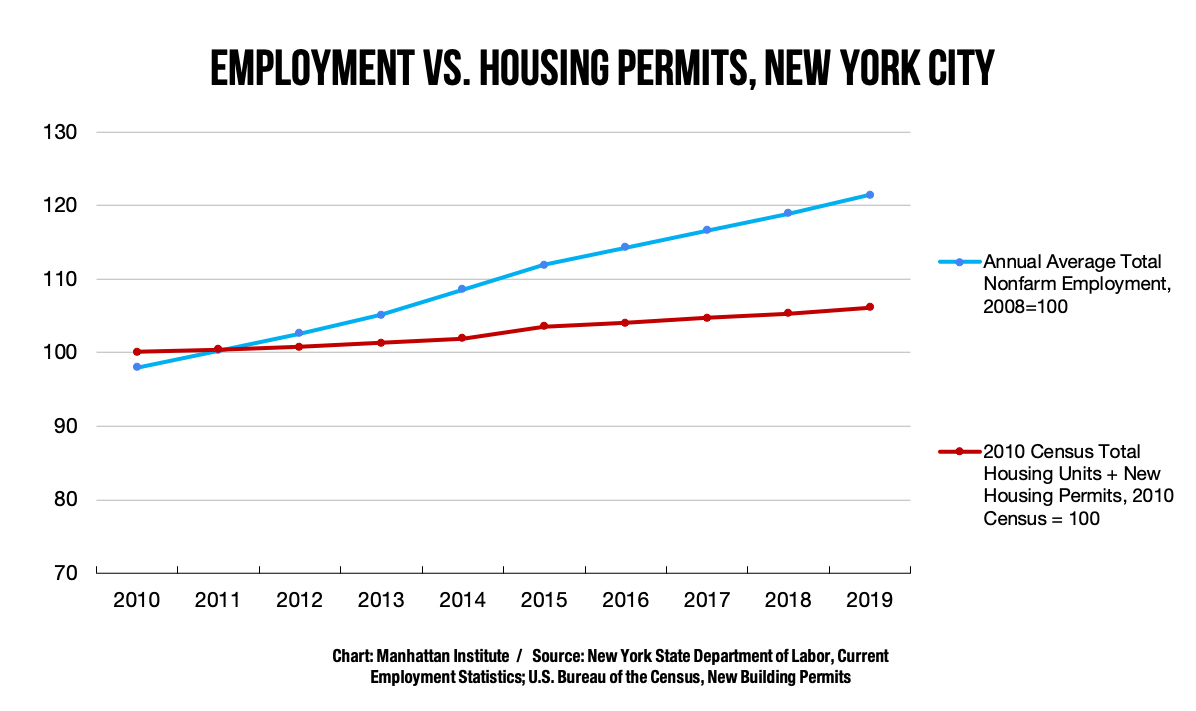 The chart above compares the increase in annual average nonfarm employment for New York City from 2010 to 2019, along with the number of building permits issued for new housing units. The employment series uses the number of jobs at the last business cycle peak, 2008, as a base year, while the building permits series uses the last Census year of 2010.

The New York City housing market was hardly roaring in 2010, just two years out of the global financial crisis. A July 2010 presentation by a New York City housing official identified that the “challenges” of the post-2008 recessionary moment were “financial distress in multi-family housing stock,” “diminishing availability and increased cost of credit,” “falling private investment,” and “rising foreclosures.” We can see these slack conditions in the data as employment was still below the 2008 peak. This situation began to turn around quickly as recovering employment reignited housing demand.

A city unable to meet the demand for housing despite producing over 200,000 units in a decade will have trouble convincing the public that its housing affordability problems stem from a dearth of housing. The public sees a great amount of housing under construction, and some people may conclude that new housing construction is not helpful to mitigating the city’s housing distress. The unfortunate truth is that the city is so large that even this sizable increment represents only a small percentage gain in the stock.

About four of every five New York City workers live in the city. The city gets some relief for its housing demand from its suburbs, particularly Hudson County, New Jersey. In 2019, Hudson County communities, mainly Jersey City, issued permits for 8,238 new units, more than any New York City borough except Brooklyn (which had 9,696). This helps sustain New York City’s economy despite the jobs-housing mismatch, but can’t solve the problems of the much larger central city.

With a recession perhaps looming, house prices and rents may experience temporary softening as employment falls, fewer people move to the city to take jobs and more housing is available to current residents. But recessions are a terrible way to achieve housing affordability. As New York’s total employment heads toward five million in the next decade, the city needs to identify the regulatory changes in land use it needs to build enough housing for the next wave of newcomers as its economy recovers.

Eric Kober is an adjunct fellow at the Manhattan Institute. He retired in 2017 as director of housing, economic and infrastructure planning at the New York City Department of City Planning.

The 2020 Recession and Unusual Recovery

In 2022, Demand for Labor Remains Strong