A paper by Gilles Duranton and Diego Puga offers a new framework that builds on the widely cited findings of Chang-Tai Hsieh and Enrico Moretti for modeling local resistance to new housing growth, despite the fact that hindering development reduces real income. The authors estimate that if New York City, Los Angeles, and Chicago reduced their land use regulations to the US median, real average incomes nationwide would rise more than 8 percent, with income losses to current residents more than offset by income gains for newcomers.

The authors build a model of urban growth that simulates the evolution of US cities over time. They test the model with shocks: How much poorer would America be if NYC and LA were forcibly shrunk to the size of Chicago? What if all US cities were capped at the size of Miami? How much richer would America be if there were no land use regulations whatsoever? The paper provides an important advance in the modeling of dynamic urban growth—and even where its policy applications are contestable, it suggests useful avenues for future research.

The core of the model builds on the key intuitive insight of urban economics: bigger cities make workers more productive through an economic principle called “agglomeration.”* But bigger cities also come with higher congestion costs. The race between agglomeration and congestion determines optimal city size generally. If there were no benefits from adding population to a given place, workers would spread themselves evenly across the country to minimize congestion. And if there were no costs to congestion, but significant benefits from city size, the entire nation would concentrate in New York City. 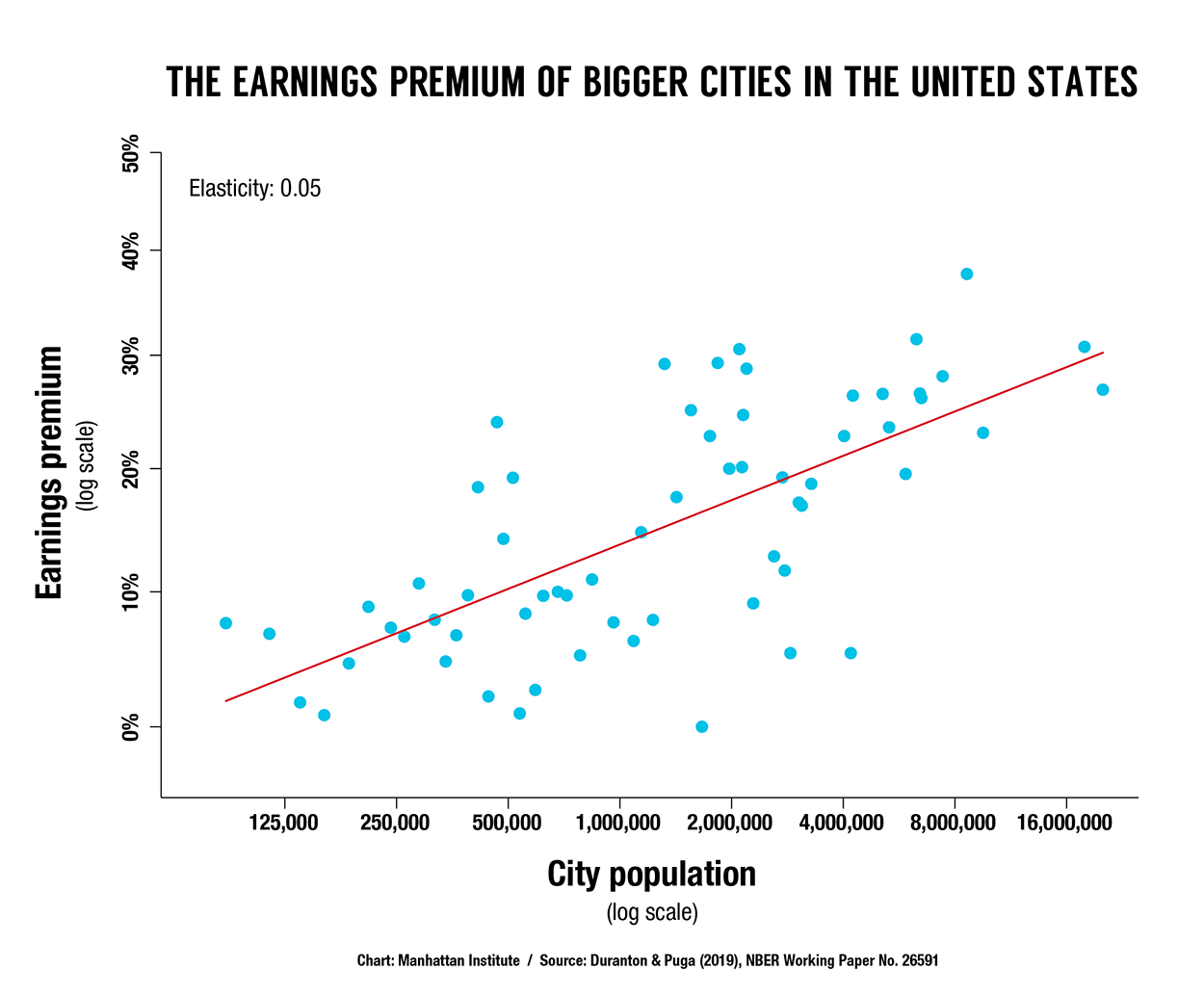 The authors’ new model of how city residents self-regulate growth marks a significant advance because it dynamically generates something akin to the outcome of Bill Fischel’s Homevoter Hypothesis: each city’s existing residents impose land-use regulatory costs on newcomers in order to govern the trade-off between the wage-increasing benefits of agglomeration and the costs of more congestion. These regulations are set at that point where the benefit to incumbent residents—from the increased productivity and density-associated wage growth generated by a new resident—is offset by the cost of the increased congestion caused by the new resident.

The problem on a national scale, in this model, is that the net gains of growth to existing residents are quickly exhausted, while newcomers still get an advantage from moving in. If everyone in the country could vote on land-use regulations, cities would keep growing beyond the level set by incumbents—to the benefit of lower-income newcomers enjoying higher wages, and to the detriment of higher-income incumbents who now face more congestion.

Incumbent urban residents in this model are conceptually like monopolists. Classically, the monopolist sets price too high and quantity too low for the social optimum. Incumbents charging a higher regulatory “price” let in fewer newcomers than would be optimal if everyone’s well-being were counted in the decision. These decisions, which impose a social loss, are privately rational because the newcomers’ net gains, while larger than the losses to incumbents, come at the expense of incumbents.

According to the authors’ model, eliminating all land use-regulations would see

the greater NYC metro area double in size to about 40 million people; Philadelphia expand to 38 million; and Boston grow to 30 million people. America’s average real income would rise by 25.7 percent in this scenario, net of the cost of added congestion. But the existing 20 million residents of the NYC metro area would face a real income loss of 13 percent. Similarly, incumbent Bostonians would lose about 1.1 percent of their real income. These losses encapsulate why incumbent residents want to restrict growth. Duranton and Puga’s hypothetical New Yorkers won’t vote to increase national incomes by 25.7 percent, because the resulting congestion of the Big Apple would still make them 13 percent poorer.

One weakness of the paper is its assertion that New York’s regional growth to the scale of Greater Tokyo would compromise incumbent New Yorkers’ quality of life because of increased congestion. It’s worth noting that this version of the model imposes single-family zoning, with growth accommodated by horizontal expansion, and without any public or private solutions to relieve growth-related traffic. But real-world Tokyo is not a crush of car congestion and pollution—indeed, many international observers consider Tokyo’s congestion-mitigating public and private mass transit infrastructure, among other public goods, to yield a more humane and pleasant urban environment than much of NYC’s core region.

The two big-picture takeaways can be seen in the behavior of real-world housing advocates. Voters in California in the last gubernatorial election supported a pro-housing governor and also many anti-housing local representatives. Most recent action in pro-housing reform has come at the state or regional level. The main thrust of the working paper jibes well with the main thrust of contemporary housing advocacy and confirms the “incumbent vs. newcomer” framing that is increasingly shaping local politics.

Is NIMBYism in the real world as rational and well informed as it is inside this model? I leave that question for the reader. But this working paper remains an excellent step forward in modeling the interaction of traditional urban economics with local political economy. And, most importantly, it creates a strong theoretical framework for understanding why state pre-emption of local zoning may well prove the best way to ensure land use regulations advance the well-being of everyone, not just a few lucky incumbents.

The Real Crisis in Higher Education

How to Avoid the Coming Economic Cliff

The Environmental Cost of Green Energy