For Most College Students, It’s What You Study—Not Where You Study

As today’s high school seniors submit their college applications for next fall, publications like the U.S. News Best Colleges will ensure they have no shortage of information regarding where to attend school. But on one important dimension—how much students earn after graduating college—where a student goes matters far less than what she chooses to study.

That is one of the principal takeaways from the updated College Scorecard, a federal dataset that reveals how much students at thousands of colleges and universities can expect to earn in their first year after graduation. Critically, the earnings data are now broken down by program of study, so prospective students can compare the earnings of, say, a history major and an engineering major who graduated from the same school. Not every program has data available, but statistics are mostly complete for the large public universities that enroll most of the nation’s undergraduates.

It is probably no surprise that majors like engineering, computer science, and nursing out-earn majors such as history, psychology, and English literature in the job market. At the University of Maryland-College Park, for instance, a history major can expect to earn just $29,000 in her first year after graduation, while a civil-engineering major at the same school has a median starting salary of nearly $65,000. 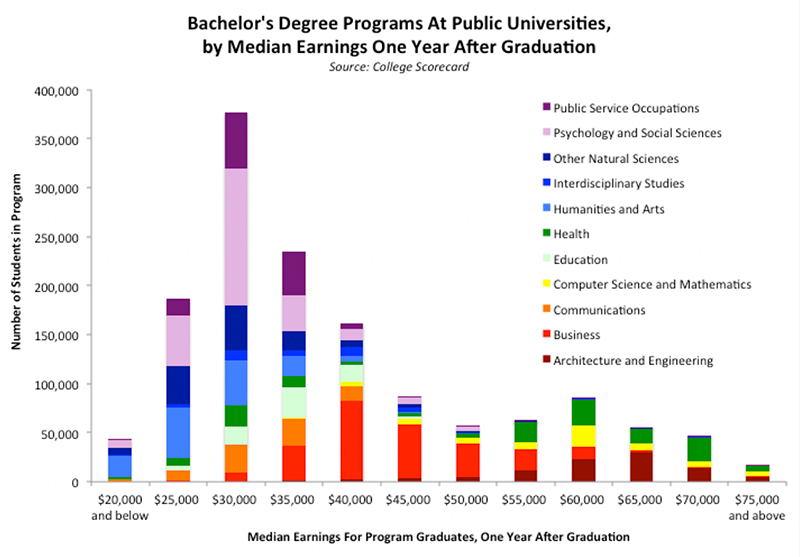 These differences are vast, but it is encouraging to learn that much of the variation in college students’ earnings comes from choice of major rather than choice of school. About 70% of undergraduates attend a public institution in their state of residence, a dynamic which drastically limits the number of schools that any one student will consider. But if earnings differences in adulthood derive mostly from field of study in college, then much of a student’s future earnings potential rests on factors within her control, rather than the geographic lottery of birth.

With some notable exceptions, high-earning majors are high-earning almost everywhere. At public universities nationwide, one of the most popular high-earning majors, nursing, virtually guarantees its graduates high salaries no matter where they go. Aside from three schools in Puerto Rico, every single public-university nursing program with data has a median starting salary above $49,000. The earnings distribution is remarkably tight: 75% of nursing students attend a program where graduates’ median starting salary is between $55,000 and $70,000. In other words, where a student trains to become a nurse matters far less than the fact that she chose nursing as a major in the first place.

Just as nursing programs have near-universally high salaries, several majors almost always yield low earnings regardless of where a student attends school. For instance, no English language and literature program at a public university has a median starting salary above $42,000. Even at public universities considered “elite,” starting salaries for English majors are nothing impressive. An English major at the University of California-Berkeley can expect to earn $32,100 after graduation, and just $29,000 at the University of Michigan-Ann Arbor.

While major matters more than institution for nursing and English, that rule is not universally true. For business majors, a student’s choice of school appears to make a big difference to her future earnings. Median starting salaries for business majors at public universities range from $19,800 at South Carolina State University to more than $100,000 at Bismarck State College in North Dakota.

While the College Scorecard data is full of valuable insights, a few words of caution are in order. The earnings reported reflect students’ salaries in their first year after graduation, which means that most will be higher as time goes on. Moreover, only students who received federal student aid while in college are included in the dataset, meaning that students who did not use aid are excluded from the earnings figures. The earnings are also reported as medians; salaries could vary for individual students attending the same programs.

These limitations mean that improving the quality of data available to students, as well as making existing data more accessible and understandable, ought to be a priority for Congress. The bipartisan College Transparency Act is one such effort to provide better statistics on student earnings after graduation, along with other outcomes of interest such as student loan repayment rates.

But the data we have today tells a compelling story nonetheless. For most students, where you study matters less than what you study. Attending a public school without a powerful brand name shouldn’t hold you back too much, provided you choose a major that’s in demand in the job market. Conversely, attending an elite public school won’t guarantee you a high starting salary, especially if you choose a major with a low payoff. Armed with the right information, a student can make choices that will put her on track for high earnings in adulthood—no matter where she goes to school.

Preston Cooper is a higher education analyst and a PhD student at George Mason University.