Why Obamacare’s Medicaid Expansion Needs to be Fixed

Congressional Republicans, having moved their ACA repeal-and-replace bill through committee, are hearing the inevitable criticisms from both sides of the aisle as to what should be done differently.  These disparate opinions are only useful insofar as they enable Senate and House leadership to finalize a bill that attracts the votes necessary to pass both houses and get to the president’s desk.

One of the issues in contention is what to do with the ACA’s Medicaid expansion.  Medicaid provides health insurance for the poor and is jointly funded by the federal and state governments. The ACA departed from the historical distribution of government financing obligations, providing inflated federal matching payment rates specifically to cover those brought newly under Medicaid.  The federal government covered 100% of these costs from 2014-16, scheduled to phase to 90% from 2020 onward.

The House bill would leave the ACA’s match rates in place until 2020, thereafter reverting to Medicaid’s historical matching formula through which the federal government provided 57% of funding on average. The expansion population enrolled before 2020 would be grandfathered in; the federal government would permanently fund them at the ACA’s elevated (90%) matching rates.  After 2020, federal payment growth per Medicaid enrollee would be limited to national health cost inflation.

The issue of how rapidly to reform the ACA’s inflated Medicaid payment rates has divided Congressional Republicans. Fiscal conservatives are concerned the bill does not do enough to scale back the ACA’s expansion costs.  Other Republicans, as well as governors in expansion states, resist even the gradual cost-containment provisions in the House bill.

The following explanation is not intended to provide guidance as to what schedule will produce the critical mass of votes necessary to pass legislation.  Rather, it is an attempt to explain the substantive problems created by the ACA’s inflated match rate.  It’s important these problems be corrected.  While the precise timetable must be determined by the vote-counting, the bill’s sponsors are right to be taking this on.

The only convincing way the ACA’s inflated Medicaid payment rate can be justified is in terms of a political negotiation between the federal government and the states.  Otherwise the ACA’s match rate makes little policy sense.  Consider the following information about current federal Medicaid support payments:

So why has this happened?  It happened because the ACA was originally drafted to conscript states to expand Medicaid to cover childless adults up to 138% of the poverty line.  The only way to overcome state objections to this was to have the federal government pick up virtually all the costs.  After the Supreme Court rendered the ACA’s Medicaid expansion optional for states, this elevated match rate thereafter became a lure for states to cover a population they would otherwise decline to spend significant resources to cover.

Had states made a priority of covering childless adults above the poverty line they would have previously sought federal waivers to do so at historical Medicaid match rates-- but generally they did not.  The ACA’s elevated Medicaid match rate for the expansion population, by design, distorted state coverage decisions relative to the results of their own prior policy deliberations.

There is an understandable tendency to treat the ACA’s Medicaid expansion as an unalloyed gain for vulnerable populations.  It is assumed that compassion must be unambiguously on the side of Medicaid expansion.  This is not necessarily so.

There would be winners and losers from repealing the ACA’s inflated Medicaid match rates.   The losers would be childless adults with incomes between 100-138% of the poverty line (assuming they do not move into superior coverage), as well as state governments.  The winners would be federal taxpayers and, potentially, the most vulnerable populations – poor children, poor pregnant women, and poor aged and disabled.

Recall that the ACA’s principal effect on Medicaid was to expand financing support, enrollment, and thus the demand for services. From 2013 to 2016, competition for such services increased from fewer than 60 million individuals to more than 72 million– an enrollment increase of over 20%.  As the National Academy of Science’s Institute of Medicine has noted, “As a result of the recent Medicaid expansion and the number of patients who are now insured through state exchanges, a shortage has developed in the supply of primary care physicians in some areas of the country relative to the demand.” 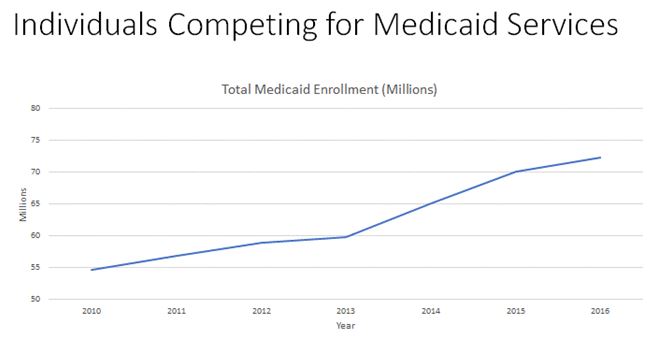 The ACA attempted to counteract this problem by increasing the supply of physicians willing to take Medicaid, via a fee increase for participating doctors.  There is an ongoing argument about whether access to care for Medicaid participants was made better or worse by the ACA on balance.  That said, unless the supply of Medicaid services expanded proportionally with higher enrollment, it is virtually certain that part of the cost of expansion was paid by previously enrolled – and more vulnerable -- individuals, in the form of increased competition for limited services.

Repeal of the ACA’s inflated Medicaid match rate would not mean childless adults between 100-138% of the poverty line couldn’t still be covered.  It would simply end the federally-imposed preference for covering this population over concentrating benefits on more vulnerable individuals.  Applying the standard federal payment rate equally to the historic population and the expansion population would permit states to more accurately weigh the trade-offs associated with expanded Medicaid coverage.

Medicaid has long struggled with financial stewardship issues due to its hybrid structure in which states do not bear the full costs of their own program management decisions.  The ACA worsened that problem by having the federal government pick up 100% of the bill for any cost-increasing decisions the states make. The predictable result has been a cost explosion in covering the newly eligible population.

Table 1 shows the CMS Medicaid actuary’s evolving estimates for the per-capita costs of covering newly eligible adults.  Note for example that 2015 annual per capita costs, estimated at less than $4000 in the 2013 report, came in at over $6365, a full 60% higher.

It wasn’t supposed to be this way.  The Medicaid actuary initially expected that per capita costs for newly eligible adults would be much lower than for previous eligibles, based on the reasonable expectation that the expansion population would have better health and income, while having fewer high-cost health conditions.  The warped incentives of the ACA, however, have induced states to set payment rates for the expansion population far higher than for the needier historic Medicaid population.

The specific politics of Medicaid, as well as the general politics of ACA repeal, are inordinately complex.  The Medicaid match rate issue, however, is substantively straightforward.  While reasonable people can differ on whom Medicaid should cover, there is little sensible policy rationale for the federal government providing greater support for the ACA’s Medicaid expansion population than it does for everyone else in the program.  Timetable aside, it’s a problem warranting correction and the bill’s sponsors deserve credit for addressing it.

Interested in real economic insights? Want to stay ahead of the competition? Each weekday morning, E21 delivers a short email that includes E21 exclusive commentaries and the latest market news and updates from Washington. Sign up for the E21 Morning EBrief.