Urban Status Might Not Insulate DC From Minimum Wage Hike

As schools break up for summer, many students are looking for summer jobs. But a proposal to increase the minimum wage in Washington, DC to $15 an hour is likely to appear on the ballot in November, and, given the DC electorate’s Democratic leanings, likely to become law. If it passes, goodbye to summer jobs for teens.

The initiative would fully phase in a $15 minimum wage by 2020, up from today’s level of $10.50. Minimum wages do more harm than good, since by increasing the cost of labor, employers are more reluctant to hire. The first casualties of minimum wage hikes are often the young, who do not have the skills and work experience to justify being paid a higher wage.

However, not all places bear the burden of minimum wages equally. Geographic variation in productivity and the cost of living means a minimum wage of $10 goes further (and is more costly to employers) in Arkansas or Mississippi than in New York or Hawaii. There is often substantial variation within states. As I argued in a column earlier this year, California’s planned $15 minimum wage will be less damaging in big cities like San Francisco than it will in rural areas and medium-sized cities like Fresno.

One way to gauge this is to look at the ratio of the minimum wage to the median wage in a city. Some economists who support moderately higher minimum wages say that this ratio should not exceed 50 percent; I would argue for a lower threshold.

Washington, as a high-income, urban area, currently has a “minimum-median” ratio of just 33 percent—lower than any state. In 2015, median wages were $31.75, almost double the national figure. Assuming median wages continue to grow at a rate of roughly 2.1 percent per year, as they have over the last several years, the fully phased-in $15 minimum wage will yield a minimum-median ratio of 42 percent in 2020. That is higher than I would prefer, but not extreme—it is below the 50 percent “danger zone.” 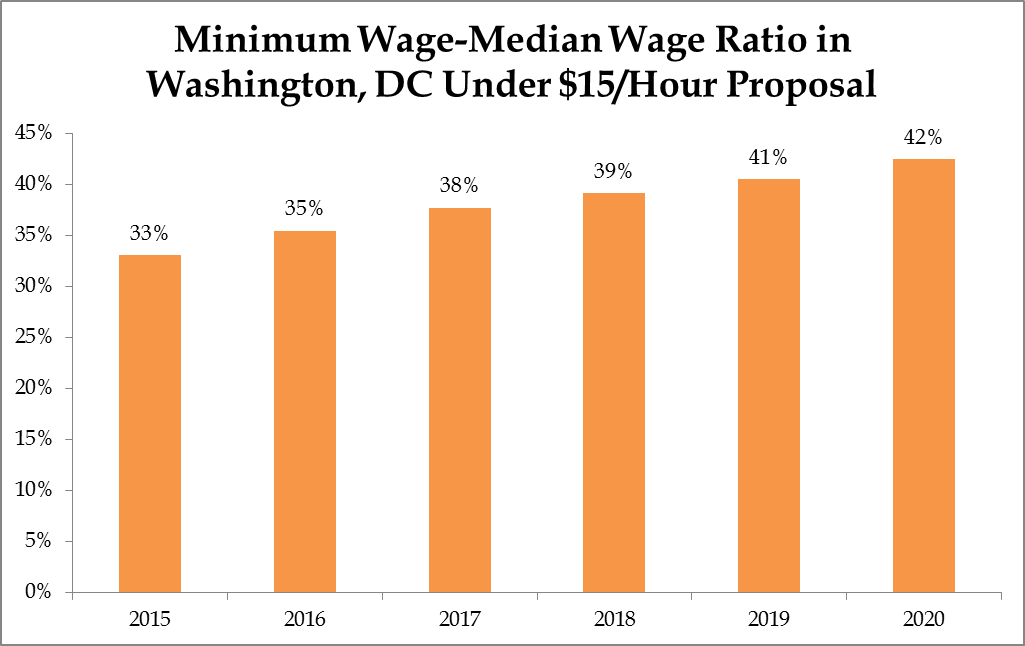 So should we just not worry about the ballot initiative? Not quite. One thing the minimum-median ratio cannot tell us is the variation in wages, since the median wage only represents the middle. Fortunately, estimates from the Bureau of Labor Statistics illuminate this variation by reporting wages in each state and metro area at the 10th, 25th, 75th, and 90th percentiles.

Put another way, if you listed everyone in Washington according to their hourly earnings, the 10th percentile earner would be the person who earns more per hour than exactly 10 percent of his fellow workers. Looking at the ratio of 10th percentile wages to median wages (the “10/50” ratio) can tell us how much variation, or inequality, there is in the labor market.

It turns out that wages vary quite a bit more in Washington’s labor market than other places. The “10/50” ratio in the city is just 36 percent. By contrast, the national ratio is 52 percent and the most unequal state, Massachusetts, has a ratio of 45 percent. People at the low end of DC’s wage spectrum, when compared to the median worker, are much lower-earning than their counterparts in the rest of the country. 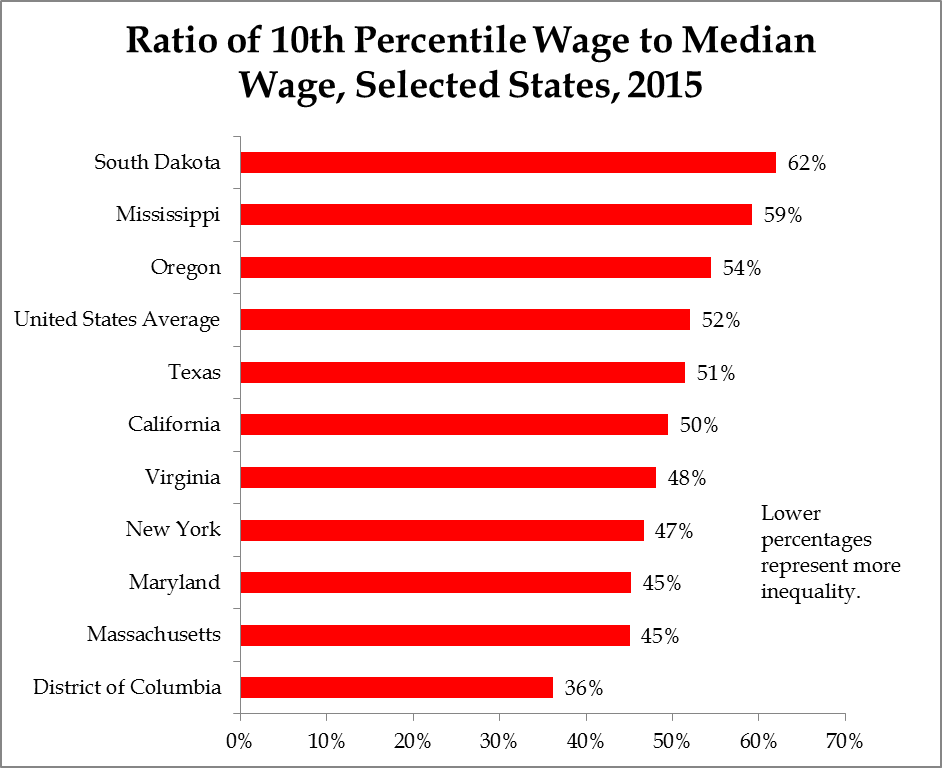 Nor is this solely due to Washington being an exclusively urban jurisdiction. Out of 421 metropolitan areas surveyed by BLS, the Washington metro area is the third-most unequal, with only California, MD, and San Jose, CA having a lower 10/50 ratio.

Why is this important? It shows that Washington’s wealth, as evidenced by its high median wage, belies the fact that wages at the low end of the spectrum are not all that high. Low wages represent low productivity, meaning DC’s low-wage jobs are more vulnerable to elimination than one might expect. It is difficult to justify hiring someone at $15 per hour when they only produce $11.50 per hour.

Extending the above analysis of minimum-median ratios to 10th percentile wages shows that in 2020, the $15 minimum wage would be 132 percent of the 10th percentile wage. Obviously, this is impossible, but it illustrates just how much the $15 minimum wage could eat into Washington’s workforce. While some workers may get a raise, many will be in danger of losing their jobs.

Washington might mitigate some of the consequences of a high minimum wage with a lower rate for younger workers. Currently individuals under the age of 18 can earn the federal youth minimum wage of $4.25 per hour for their first 90 days of employment. The DC City Council should consider raising this eligibility age to 20, in line with the federal standard.

Given uniquely high inequality in Washington, the minimum wage will probably do more damage here than it would in comparable cities such as Boston or Seattle (not to say that Boston and Seattle would be unscathed). Moreover, Washington currently has a higher minimum wage—$10.50, already scheduled to rise to $11.50 in July—than any state in the country. Rather than raising the minimum wage, the focus ought to be on bringing down the city’s high cost of living to make life more affordable and improving the city’s tax climate. Government cannot legislate prosperity through higher minimum wages. There will always be unintended consequences.

6 Ideas Cities Can Use to Boost Their Economies