As the election season draws to a close, the Department of Health and Human Services released some news that might qualify as an October Surprise: benchmark premiums for health insurance under the Affordable Care Act (ACA) will rise an average of 25 percent in 2017. These changes range from an increase of 145 percent in Maricopa County (Phoenix), Arizona, to a decline of 12 percent in Marion County (Indianapolis), Indiana. Several states only have one insurer offering plans on the ACA’s exchanges.

Skyrocketing premiums and insurer withdrawals have all the attributes of a death spiral, wherein the benefits of insurance do not exceed the costs for many prospective enrollees. Without healthy people to cover the costs of insuring sick people, insurers must either raise premiums or exit the market altogether. Regulations prohibit insurance companies from pursuing other solutions, such as trimming unnecessary benefits or charging more to the most expensive groups to cover. The end result is a collapse of the marketplace.

The Obama administration argues that fast premium growth is nothing to worry about because most people receive government subsidies to help them cover the cost of insurance. According to the HHS release, 77 percent of ACA enrollees can find a 2017 plan for $100 per month or less after taking subsidies into account.

This is misleading for two reasons. First, taxpayers must pick up the tab for subsidies, so high pre-subsidy premiums are not costless. Second, the ACA enrollees in the HHS subsidy figures refer to actual enrollees, not all potential enrollees.

ACA subsidies are mostly based on household income, and they rapidly phase out as income rises. A single, childless 27-year-old with earnings at exactly the federal poverty line ($11,770 for the 2016 enrollment period) qualifies for $225 in monthly subsidies, reducing his monthly premium to just $20. Yet if his income rises to 300 percent of the poverty line ($35,310), he qualifies for no subsidies and must pay $245 per month ($2,940 per year) for coverage. For this 27-year-old, 200 percent increase in income causes a 1,125 percent increase in premiums.

Note: I calculated these figures using this tool from the Kaiser Family Foundation. They refer to 2016 premiums; 2017 premiums will generally be higher. 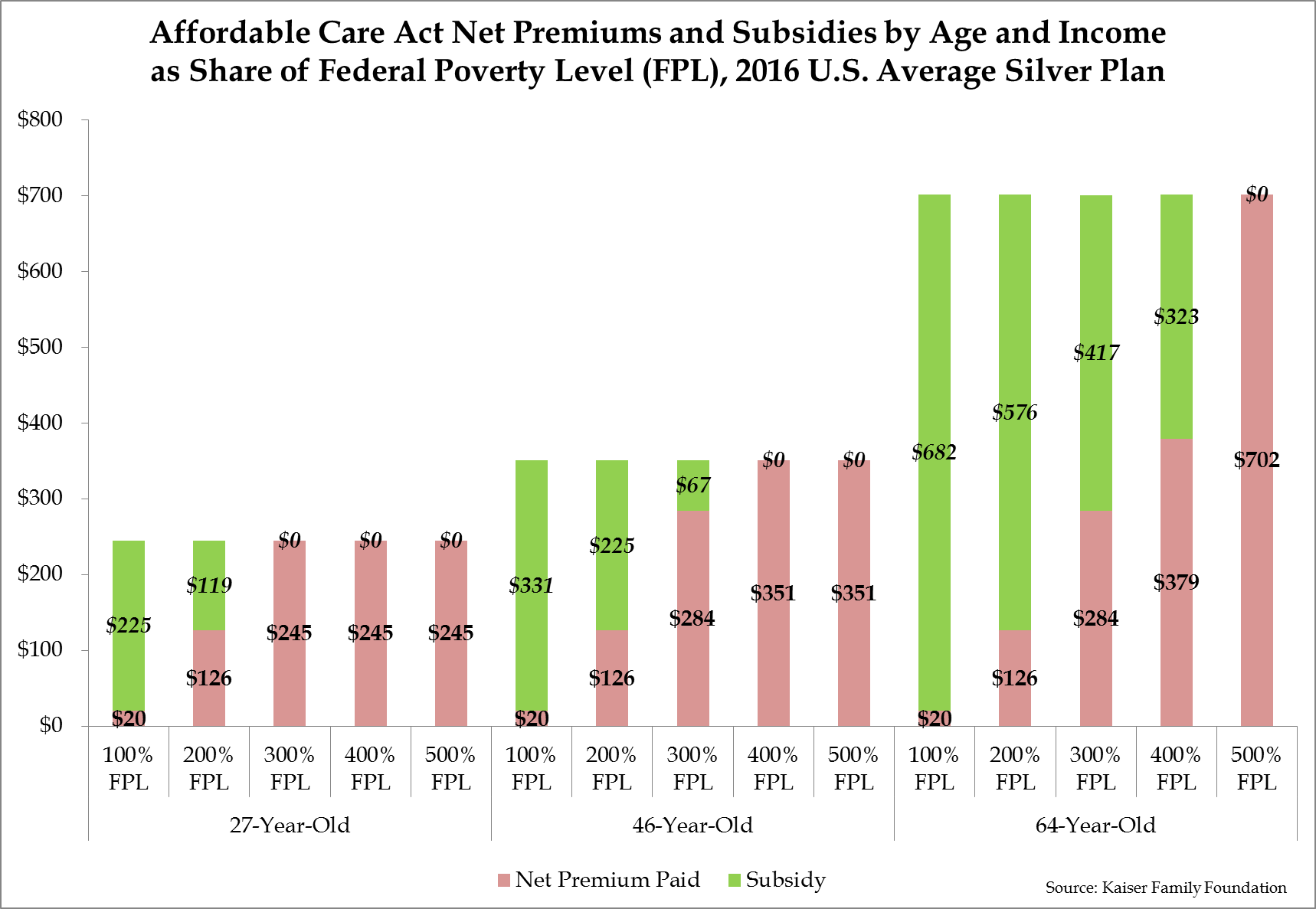 Naturally, many people who qualify for little or no subsidy will skip paying thousands of dollars for coverage and instead pay the $695 fine for being uninsured. Since subsidies phase out as income rises, middle-class households make up a sizeable chunk of the uninsured, despite the perception that the uninsured are overwhelmingly poor. Forty-seven percent of the nonelderly uninsured had an income above 200 percent of the poverty line in 2015. Just a quarter of the nonelderly uninsured were below the poverty line.

According to the Kaiser Family Foundation, three million people who did not enroll in ACA coverage in 2015 were ineligible for subsidies due to their high incomes. Another 5.3 million were eligible for subsidies but did not enroll, possibly because the government assistance did not cover enough of the premium to make purchasing insurance worthwhile.

The result is that the group of uninsured individuals who choose to purchase coverage through the ACA are disproportionately eligible for the most generous subsidies, and are thus likely to have lower incomes. As there is a well-known correlation between income and health, this also means the pool of ACA enrollees is likely to be sicker than the population as a whole, and thus more expensive to insure.

The 25 percent premium increase in 2017 will only exacerbate this pattern. People who receive little or no subsidy will disproportionately abandon the ACA exchanges, meaning that the net average premium for people who remain will be lower. The ACA’s defenders will cite that figure as evidence that premium increases are not as bad as they seem. But it will really show that the law is failing, as generous average subsidies (and lower net premiums) are consistent with a poorer, smaller, and sicker pool of enrollees—a recipe for collapse.

To prevent the collapse of the ACA exchanges, Congress would need to either increase individual mandate penalties or pour more taxpayer money into exchange subsidies. In other words, the only “fixes” to the law are either very unpopular or very expensive—and might not even solve the problem. The record shows that it is time to abandon the ACA model altogether.