Student Loan Forgiveness Is Welfare For the Rich

President Barack Obama recently announced a new push to enroll people with outstanding student loan debt in programs that make it easier to pay back. Specifically, the Department of Education is promoting so-called “income-driven repayment” plans, where borrowers do not make a fixed payment every month, but instead contribute a certain portion of their income towards their student loan balance. These plans are not new—the White House’s initiative is mostly to raise awareness.

It is a good idea in theory, and will certainly make payments more manageable for borrowers. However, the scheme has one major problem for taxpayers: if students have not repaid their loans in full at the end of a fixed period (generally 20 or 25 years), any remaining balance is forgiven. Those who borrow the most receive a massive taxpayer subsidy.

President Obama’s latest push may be unnecessary, as income-driven repayment plans have become far more popular in recent years. In the last two years, the share of federal Direct Loan borrowers enrolled in income-driven repayment plans has doubled from 11 percent to 22 percent. The share making level payments (a fixed amount every month) or graduated payments (payments which go up with time) has declined from 84 percent of borrowers to just under three-quarters. People with student loans are rapidly learning about these plans, and using them. 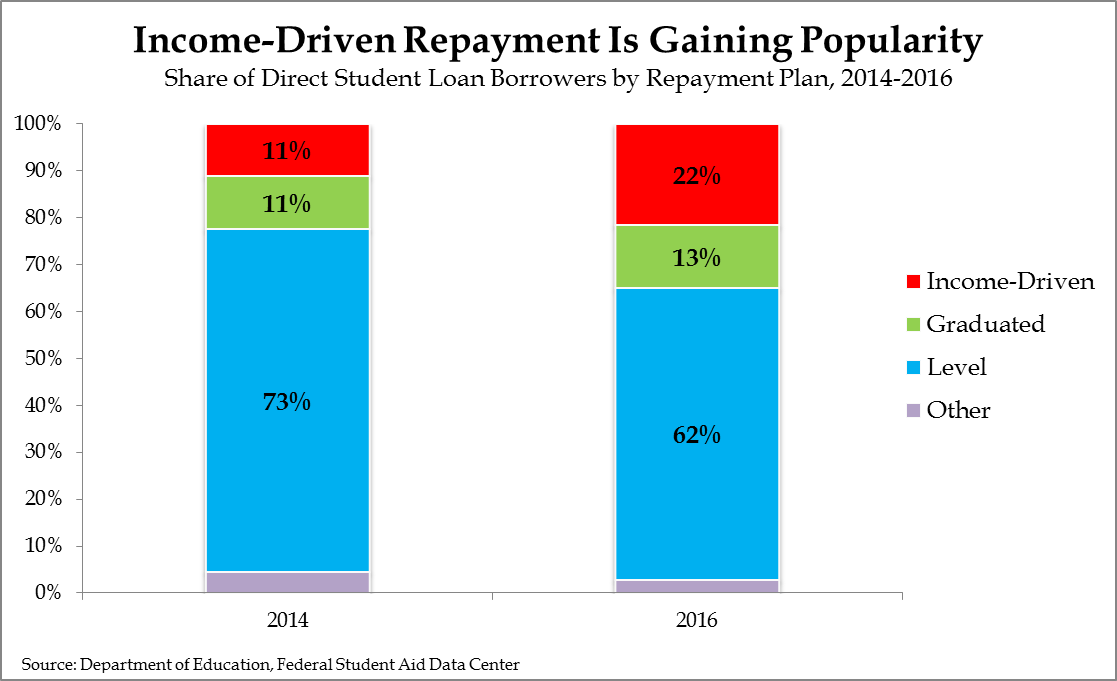 In principle, income-driven repayment is a good way to pay back student loans. Since college is an investment that leads to higher earnings down the road, it makes sense that students who see a higher return on investment (a higher income) should pay more than those for whom the investment fails. Stocks are a good parallel—traders invest a certain amount in a company, and receive higher or lower returns depending on how the company performs. This idea of financing college through “student equity” rather than student debt dates back to Milton Friedman and has counted former Governor Jeb Bush and Senator Marco Rubio among its modern proponents.

The trouble is that under the current design, students often will not pay back the full balance of the loan, due to loan-forgiveness at the end of a 20- or 25-year period. We do not yet have good data on how many students will utilize this provision, but Department of Education calculations show that a typical undergraduate borrower could receive around $25,000 in loan forgiveness.

But wait, isn’t loan forgiveness a good way to help distressed borrowers? Not so. This brings us to an interesting paradox in the economics of student loans: the most distressed borrowers have borrowed the least. While stories of elite college graduates with six figures in debt dominate headlines, in reality default rates are much higher among those who have borrowed less than $5,000. 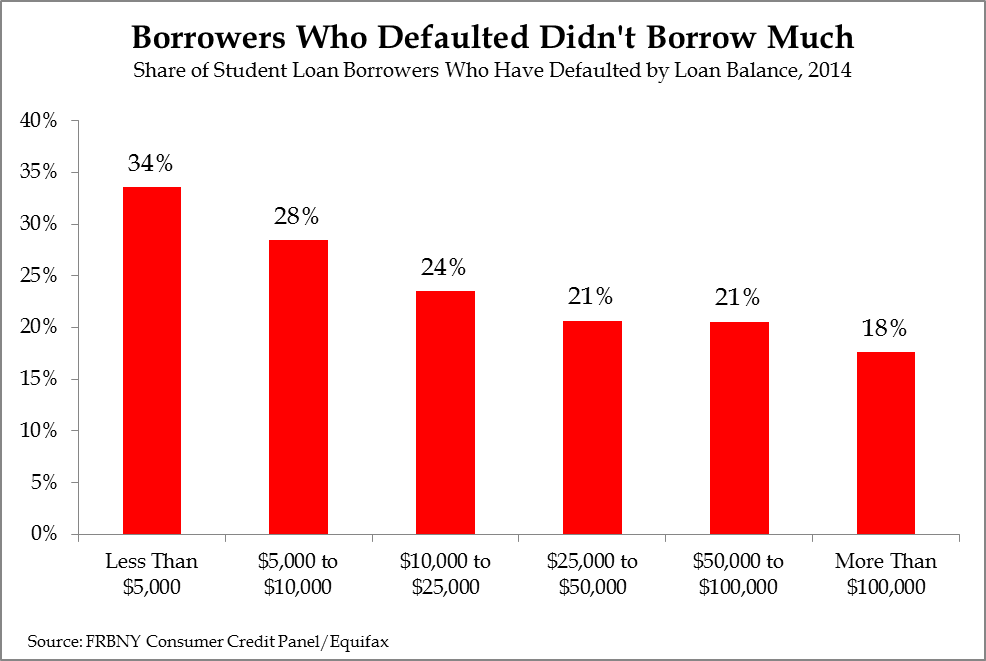 Borrowers further behind on their loans, a proxy for financial distress, took out much less on average. A borrower in current repayment has an average balance of $30,100, compared to just $15,400 for a borrower in default.

This has much to do with the characteristics of borrowers themselves. Students who attend poor-quality institutions and/or do not finish their degrees do not borrow as much, but are also much less likely to find well-paying jobs. Individuals with college experience but no degree earn 35 percent less and have an unemployment rate two points higher than those with bachelor’s degrees. Low earnings and joblessness, obviously, can lead to financial distress and cause delinquency or default on loans.

Graduating from law school with $100,000 in debt is stressful, no doubt, but such students are not likely to have trouble finding jobs that will enable them to pay down their loans. But if you drop out of college, even with only $10,000 in debt, just finding a decent job can be difficult—let alone making student loan payments.

After 25 years of making payments under income-driven plans, those most likely to have a forgivable balance are those who have attended the pricier, better colleges and taken out more in debt. Those enrolled in income-driven repayment plans have an average unpaid balance of $51,000, compared to just $22,000 for those in level and graduated plans. Why should taxpayers, many of whom lack college degrees themselves, subsidize those former students with the best career prospects, and the expensive colleges which educate them?

Some distressed borrowers may get relief from loan forgiveness, but most benefits are likely to flow to the law and business school graduates who have borrowed the most. Loan forgiveness, in other words, is largely a subsidy for the upper-middle class. Taxpayers already subsidize student borrowers to the tune of $170 billion; there is no reason to layer another subsidy on top of this, least of all one so regressive. While income-driven repayment has merit as an idea, policymakers should remember that the operative word is “repayment.”

This column originally appeared at Forbes.