April is the high-water mark for America’s major sports. Fans will tune in across the country tonight to follow their teams, whether the NFL draft, the NBA or NHL playoffs, or spring baseball. As fun as these sports are, when it comes to funneling public funds to new sports venues, state and local governments should just say no.

Proponents claim the new publicly-funded stadiums will deliver benefits to the surrounding areas. But these claims do not hold up under scrutiny. Stadiums should not receive further public subsidies.

The practice of threatening to relocate if the current locale does not fork over more public money for a new stadium is now common practice, most recently seen with the Raiders leaving Oakland for the Las Vegas desert. All told, the Raiders were able to secure nearly $1 billion in subsidies to entice them to move.

The Raiders are just the tip of the iceberg. Two NBA teams mired in losing seasons, the Orlando Magic and Brooklyn Nets, play in recently-built stadiums that were mostly publicly financed. Cowboys fans might have been delighted when the team selected star Ezekiel Elliott in last year’s draft, but the new stadium relied on substantial public financing to get built.

Estimates for the total amount of public funds spent on stadium subsidies vary and reach as high as $12 billion. The reliance on public funds is not uniform has not always been common practice. As this figure from the American Economic Association shows, in the earliest stages of sports stadiums in America, privately-financed stadiums were the norm. Iconic venues such as Madison Square Garden and Wrigley Field did not rely on any subsidies when originally built. 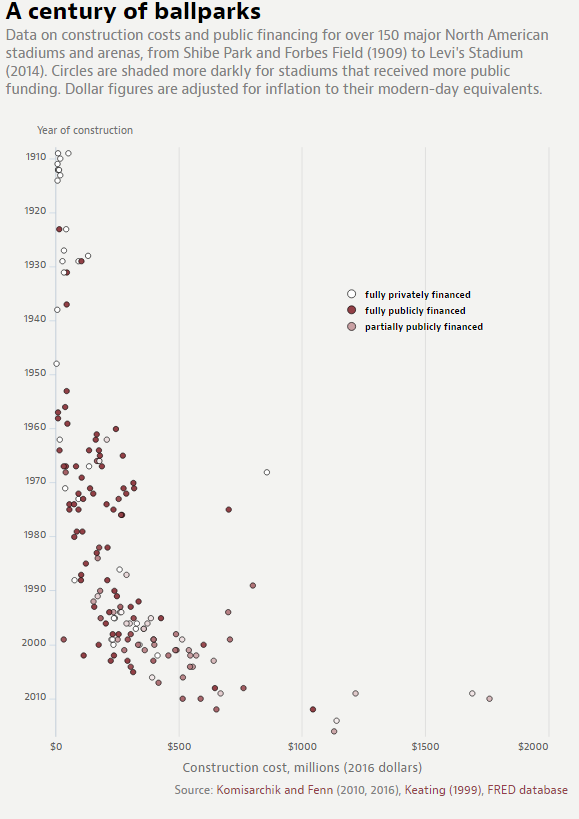 Source: Tim Hyde, “Will cities ever break the habit of paying for stadiums?” American Economic Association.

Examples of stadiums built without public funds are rarer in recent years, but the Patriots’ Gillette Stadium and the Air Canada Center used by the Maple Leafs and the Raptors show that private construction is possible, even in an era with more expensive stadiums.

Teams and fans convince state and local governments to dole out public funds for new stadiums in two ways. They produce reports projecting that the venues would deliver higher tax revenues or greater development, or they threaten to leave. The extent to which the threat of exit gets to the emotions of fans is difficult to quantify.  Most analysts agree that the rosy projections used to push stadium subsidy deals are not based on sound analysis.

Benefits generated by professional sports facilities and franchises are smaller than the cost of the subsidies. This consensus is not a recent development, as studies examining the effects of stadiums have come to similar conclusions since the 1990s. Dennis Coates is author of a 2015 study that found sports franchises had no significant effect on the growth rate of per capita personal income. Contrary to what stadium proponents claim, the sports environment has only a small effect on local conditions, and in many measures the effect is negative. The new paper confirmed his earlier finding that “sports-led development is unlikely to succeed in making a community richer.”

Economists agree to an almost unparalleled degree on the issue of stadium subsidies. A recent question form the IGM Economic Experts Panel asked economists to weigh in on the assertion that stadium subsidies were “likely to cost the relevant taxpayers more than any local benefits that are generated.” Only 2 percent of respondents disagreed, while 67 percent agreed or strongly agreed. The consensus is even more overwhelming when weighted by the confidence of the respondents.

The case for stadium subsidies relies on unrealistic projections of the benefits new venues would deliver. Taxpayers do not benefit from these deals because the costs outweigh whatever meager benefits the stadium might deliver to the municipality. Nevertheless, teams across all major sports routinely convince state and local governments to promise them substantial amounts in public funds. In the early years of professional sports, stadiums built entirely with private money were the norm. More recent examples are rarer, but it is still possible.

State and local governments should resist calls for further stadium subsidies. As fun as playoff season might be, or however deeply people connect to a team or player, there is no case for continuing to funnel money to these projects. To date, state and local governments have supplied approximately $12 billion in public subsidies to building and renovating new stadiums. Teams have given no indication that their appetite for public financing has waned. Owners should endeavor to find ways to finance their new venues without relying on subsidies.