The incoming Congress and Trump administration have their hands full with an ambitious economic policy agenda topped by, among other things, repealing and replacing the Affordable Care Act (ACA).  However, a recent report by the Congressional Budget Office (CBO) reminds us also of the worsening financial condition of Social Security, as did the annual trustees’ report earlier this year.  This month Congressman Sam Johnson, chairman of the House Ways and Means Social Security Subcommittee, offered a detailed proposal to tackle the problem.

Social Security reform proposals can be quite complex. It is often helpful to understand them in terms of the bottom-line value judgments they reflect.  The following attempts to explain the Johnson proposal in those terms.

Value Judgment #1: The Total Sacrifices Required.  This list begins with a trick entry. The total changes required to restore Social Security to financial balance do not actually embody a discretionary judgment.  The Social Security shortfall is what it is; legislators can choose how to allocate the effects of closing it, but can’t control the magnitude of the required corrections.  When critics attack reform proposals for the hardships they allegedly inflict, they are being disingenuous in that any workable plan must require equally stringent measures.  If a plan makes fewer changes to benefits, it must make up the difference with larger tax increases.  If a plan seems to require fewer corrections overall, it merely means additional income losses will be imposed on participants later that aren’t yet being disclosed.

There’s really only one way policy makers can affect the total measures required; by choosing when to act.  Assuming we’re not going to go back and cut benefits for people already collecting them, continued delay means greater income losses for those affected by measures required to maintain solvency.  Thus, no one who offers a plan for action can rightly be blamed for imposing undue hardships.  That blame belongs to those who delay the necessary corrections.

Before we move on, one quick technical point about the shortfall.  The Social Security Actuary tracks two measures of the long-term financing gap: the average gap over 75 years (2.66% of taxable worker wages), and the gap between taxes and expenditures in the 75th year (4.35% of taxable worker wages).  (See Figure 1, taken from the trustees’ report).   To achieve sustainable financing a plan must eliminate both shortfalls, as the Johnson proposal would.  Some proposals would close the shortfall by one measure but not the other.  Under such proposals, additional losses would await participants as the program’s financing shortfalls later re-emerge. 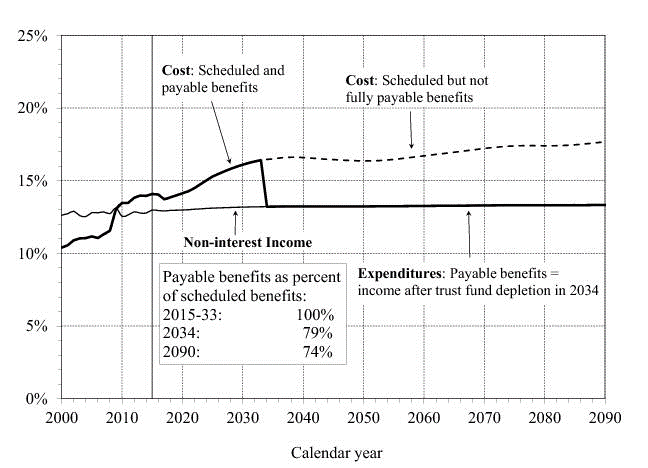 Value Judgment #2:  Raising Taxes vs Slowing Cost Growth.  This is one of the most fundamental choices facing plan authors.  Under current law, the cost of paying scheduled benefits well exceeds projected program revenues.  Should the gap be closed by slowing the growth of program costs, raising taxes, or some combination of the two?

The Johnson proposal would close the gap entirely on the cost containment side, without tax increases.  One provision would calculate COLAs for most recipients using the chained CPI recommended by BLS as the best measure of inflation.  Another provision would phase in benefit formula changes to slow benefit growth for higher-income earners.  Another provision would gradually increase the normal retirement age by three months a year starting in 2023 until it reaches 69 in 2030 (workers could still choose to claim benefits as early as 62).  Other provisions would affect program expenditures in roughly equal positive and negative amounts.

Existing plans run the gamut from those that would balance the system solely through cost containment to those relying on tax increases, with others roughly splitting the difference.  (In recent years, there have also been proposals to increase total costs even faster than current schedules, which would require still larger tax increases to sustain. These proposals have not generally been offered in a financially sustainable form.)

a) the general desirability of keeping program cost growth from outpacing national economic growth (even a solution like Congressman Johnson’s based entirely on cost containment will still have cost burdens rise through the late 2020s due to ongoing baby boomer retirements);

b) more equitable treatment of different generations (this is because the current shortfall consists entirely of an excess of scheduled benefits over taxes for people already in the system; leaving benefit schedules unchanged would lock in larger net income losses for younger generations as they are forced to make up the difference);

c) Social Security cost burdens are already depressing after-Social-Security-tax wage growth relative to benefit growth, a situation that would be exacerbated by a tax-increase approach;

d) Social Security is an income transfer program rather than a savings program; hence, a tax-increase-based solution causes retirement benefit promises to increase without an accompanying increase in the national economic resources available to finance them.

Value Judgment #3: Who Should Pay to Close the Shortfall?  In the Johnson plan the answer is very clear:  higher-income beneficiaries.  The proposal would eliminate COLAs for the highest-income participants who pay income-related Medicare Part B premiums.  The plan’s benefit formula constraints would impact roughly the upper half of income earners.  Benefits for high-income nonworking spouses would also be constrained to not exceed those earned by a low-income worker over a full career of program contributions.   An increased special minimum benefit would be created for lower-income workers, growing with the number of their work years.  The oldest beneficiaries at greatest risk of poverty would also receive a targeted benefit increase.

As a result, low-income workers working a full career would expect substantial benefit increases under the Johnson proposal, while the cost of restoring the system to financial balance would be borne by higher-income workers. 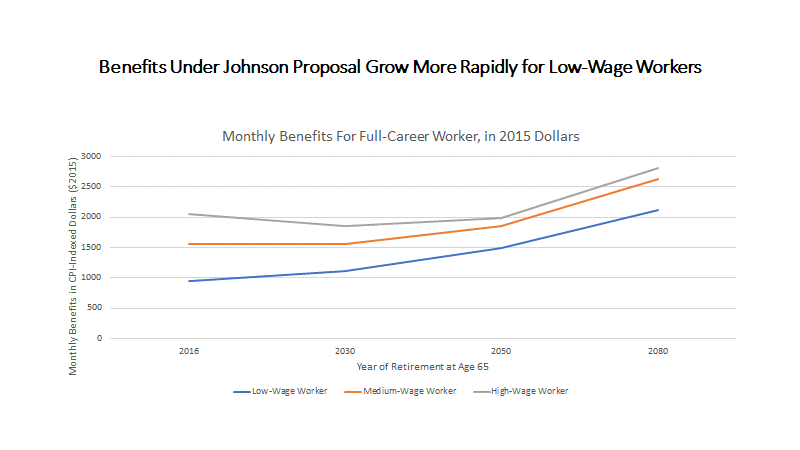 Experts have long understood that Social Security imposes a high marginal tax rate on employment earnings at precisely the moment in life when many are contemplating whether to retire (see for example Goda, Shoven and Slavov), and that individuals do respond to these incentives by leaving the labor market. Part of the problem is that Social Security calculates benefits based on lifetime average earnings rather than allowing individuals to accrue additional benefits with each further year of work as the Johnson plan would do.  The Johnson plan would also eliminate the program’s penalty for earnings after early retirement age, and give beneficiaries the option of receiving some delayed retirement credits (DRCs) as a lump sum, something other experts (see Olivia Mitchell) suggest is attractive to workers.

Reasonable people can and do make different value judgments about how best to stabilize Social Security finances.  But for those who want to avoid tax increases, who wish to correct problematic work disincentives, and who wish to protect low-wage workers while requiring those with higher incomes to bear the cost of achieving financial stability, the Johnson proposal shows how these goals can be achieved.