The Soaring Costs of the ACA’s Medicaid Expansion

The implementation of major legislation such as the Affordable Care Act (ACA) often results in fiscal outcomes that differ significantly from prior projections. Whenever this happens it leads to many questions, much confusion, and several claims and counter-claims. Rarely is it immediately clear whether the law is working differently than envisioned, or whether the unexpected outcomes are due to inevitable projection errors having nothing to do with the law.

On rare occasion, however, a prior projection proves so far off that its significance must be noted. Two weeks ago my colleague Brian Blase uncovered such a development with respect to the ACA’s Medicaid expansion. Recall that the ACA considerably expanded Medicaid eligibility – an expansion made optional for the states in a later Supreme Court ruling. It turns out that the 2015 per-capita cost of this Medicaid expansion is a whopping 49% higher than projections made just one year before.

This disclosure can be found on page 27 of the 2015 Actuarial Report for Medicaid, released this July. Here is how the report described the issue:

How can a projection be this far off after only one year? To understand, let’s first discuss more of the “what” of the projection, and then proceed to the “why.”

The 2013 Medicaid report was the last one reflecting expectations prior to the 2014 expansion. Medicaid’s actuaries then expected that the initial per-capita costs of covering newly eligible adults would be comparable to those for previously-eligible adults, but would later become substantially lower. The explanation given in the 2013 report was:

“The estimated average benefit costs for adults who enroll as a result of the expanded eligibility criteria in the Affordable Care Act are significantly lower than those for the average beneficiary. This difference arises partly from the fact that adults in poor health often suffer a loss in income, increasing their likelihood of qualifying for Medicaid under the pre-Affordable Care Act criteria.”

It was also thought then that among the newly-eligible population, the sickest would enroll first and the healthier individuals later, causing per-capita costs to drop during the next few years. The 2013 report projected that the per-capita cost for newly eligible adults would be just 1% lower than previously-eligible adults in the first year, but a good 28% lower in the third.

But this isn’t what happened. First, the initial per-capita cost came in much higher than expected. Here’s how the 2014 report described it: 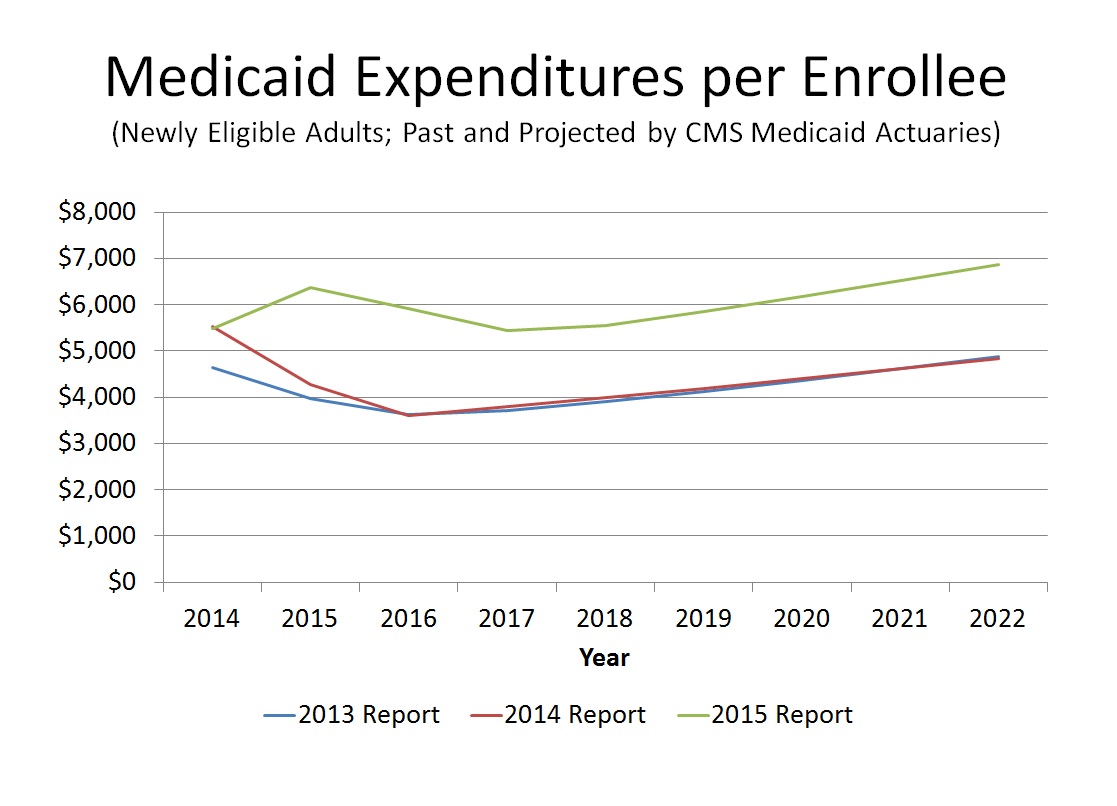 Why were 2015 costs so high? The 2015 report speculates that some costs incurred in 2014 were reported in 2015. But reporting those costs in 2014 wouldn’t have meant they were any less underestimated. It would just mean that more of the underestimation happened in 2014 than 2015.

The report attempts to explain the underestimation as follows:

Again a translation may be in order: Basically states established far higher expenditure requirements for the expansion population than the federal government expected, by positing that beneficiaries would be in need of more health services.

Why did this happen? Remember, the ACA established an initial 100% federal matching payment for state Medicaid expansion costs, contrasting with historical federal match rates that averaged 57%. Even when the feds paid 57% of the bill there was a longstanding concern that states were insufficiently accountable for their cost-expanding decisions, with much of that cost being shifted to federal taxpayers. But the ACA’s current 100% match means that states make the decisions about expanding Medicaid while the federal government picks up all the costs. Even after the ACA is fully phased in, the feds will still pay for 90%. Under such arrangements, cost overruns are predictable.

The fact that the states set payment rates higher than the federal government expected carries additional implications. If the states set payment rates too high for the expansion population, then per their risk-sharing arrangements with insurance plans some money will flow back to the federal government. If this happens to the extent the Medicaid actuaries expect, recent per-capita costs will be about 9% less than shown in the 2015 report – though still dramatically higher than estimated last year.

The rising cost of Medicaid expansion leads to worsening budgetary evaluations for the ACA. Contained in CBO’s recent projections are harbingers of this: The slight uptick in CBO’s latest cost projections reflects higher enrollment as well as growth in per-capita costs. If the latest Medicaid actuaries’ report is any indication, future cost projections may well get significantly worse. Thus far CBO’s adjustments to per capita costs do not appear to fully reflect an increase of the magnitude shown in the latest Medicaid report.  Remember also that the program’s actuaries still assume that due to risk-sharing payments and other factors, per-capita expansion costs will decline in 2016 and 2017. If this assumption proves incorrect, future costs will be higher still.

Having federal taxpayers pick up between 90-100% of the cost of state Medicaid expansions was one of many questionable policy decisions made in the ACA. It’s also proving to be much more expensive than the federal government expected.