Our Choice Between Progressive Tax Policies

Regardless of whether tax legislation is enacted resembling one of the plans now moving through the House and Senate, or whether instead legislation fails and current tax law remains on the books, US tax policy will be highly progressive in the sense of aggressively redistributing income away from richer Americans.  That this is not a universally understood truth reflects poorly on the quality of our information-sharing and national policy discussion.

To construct good tax policy one must balance a number of competing considerations.  Among them:

1)      Whether tax collections are sufficient to finance government spending without problematic debt accumulation;

2)      Minimizing the adverse effects of taxation on productive economic activity, economic growth, living standards, and US competitiveness in international markets;

3)      Constraining complexity so that the system is manageable and transparent for taxpayers, while minimizing the costs and inefficiencies of tax compliance;

6)      Vertical equity, meaning imposing relatively fewer burdens on those with lower standards of living and less ability to pay.

These considerations naturally conflict to a certain extent.  Pursuit of goal #2 (minimizing adverse effects on productive work) often conflicts with goal #6 (collecting more from those who earn more).  There is no objectively correct way to balance these considerations, which are inevitably weighted differently by different policy advocates.  In practice, goals #2-#5 are generally invoked to support changes to tax policy that would lower marginal rates, close special-interest loopholes, and more often than not reduce total projected tax collections.  Goals #1 and #6 are instead often invoked by opponents of legislation to accomplish those objectives.

Goal #6 (progressivity) is an important consideration in tax policy but is by no means the only one.  It tends to receive disproportionate attention in the public debate over taxes.  In part this is because any framing of “rich vs. poor” provides irresistible media narratives and political opportunities that many will inevitably seize.  In addition, there is a segment of the body politic that evaluates US tax policy primarily in terms of how much income it redistributes from rich to poor.  This is a legitimate viewpoint and deserves as much respect as any other, though it is not a universal view (nor is it mine, primarily for the reason that the income tax code is not the optimal forum for alleviating discrepancies in economic opportunity).  Proportionate attention to a policy goal of progressivity is appropriate, but it cannot become the predominant focus of the tax policy debate without adopting a highly subjective, narrow policy view.

To fully understand tax policy, and indeed most any other area of federal economic policy, it is essential to distinguish absolute policies (that is, what specific policies would actually do) from differences between alternative policies.  What matters to people’s lives is the total effect of a specific policy, not how it compares to an imagined alternative.  To be fully forthright, it is especially important to avoid language describing a comparison between policies as though it describes an absolute policy.  Doing so can only lead to confusion if not outright deception.

To illustrate this, consider an example that nearly every sports fan would understand.  Below are some representative stats of Tom Brady, quarterback of the New England Patriots.

In both of these seasons Tom Brady was a fantastic quarterback and no knowledgeable fan would argue otherwise.  In each of them he was an All-Pro, completed most of his attempted passes, compiled impressive yardage, led his team to a division title and got them into the conference championship game.  But if one were to focus only on the difference between the two seasons, one would conclude he had moved toward becoming one of the worst quarterbacks in football in the second season, completing only 5% of his additional passes and averaging less than a half-yard in each such passing attempt. This of course would be a ludicrous way of evaluating things, as it excludes over 95% of the total information about Brady’s performance to produce a largely meaningless picture.  It is perfectly reasonable to say one would prefer Brady in the first season to the second. However, it would be bizarrely misleading to claim he was a terrible quarterback in the second season, judging by the differential rather than the total performance.

For similar reasons discussions of tax policy are largely meaningless when they focus on differentials between alternatives rather than total policy results. Doing so leaves out the vast majority of the relevant picture.  Consider for example the versions of the tax plans moving respectively through the House and Senate, as analyzed by the Joint Committee on Taxation (JCT).  Here’s how the JCT analysis breaks down the average tax rates in 2027 under the two chambers’ approaches, for taxpayers in various income categories (I’m using an earlier JCT estimate that doesn’t include more recent analysis of the Senate’s provision to repeal the health insurance purchase mandate, because of the considerable controversy JCT’s treatment of that provision has engendered): 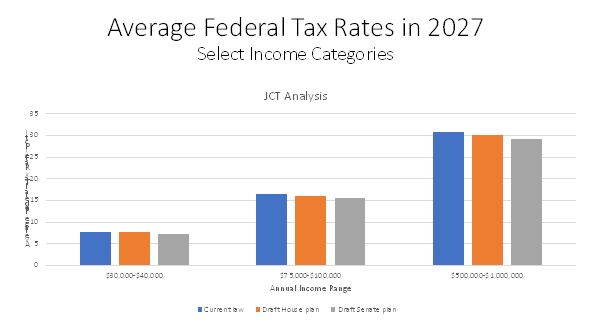 All of these approaches to tax policy would aggressively redistribute income from richer Americans to poorer ones.  Under each scenario the effective total tax rate facing people in the $75,000-$100,000 income range would be more than double what it is in the $30,000-$40,000 range, while the effective total tax rate for those in the $500,000-$1,000,000 range would be roughly four times as high.

None of this is to gloss over the differences between the various approaches. It is entirely reasonable to say, “I strongly prefer Policy X to Policy Y because Policy Y would not be as progressive/redistributive as Policy X.”  It is also reasonable to say, “I oppose Plan Z because the taxes paid by the rich would not be as much higher than the taxes paid by lower-income Americans, as they would be under current law.”  But it is flatly incorrect to describe any of these highly progressive policies as “throwing vast quantities of money at the already wealthy,” as one columnist recently did.

Distinguishing absolute policies from incremental changes is especially important when the signs associated with the two concepts are different (i.e., positive vs. negative).  If two policies are substantially progressive, it is misleading to describe either of them as being regressive.

The importance of clear language is especially important with respect to income tax policy discussions because of factors specific to the topic.  Nearly half of American adults don’t pay any federal income taxes (as distinct from payroll taxes) at all.  To adopt a framework that implicitly insists not only that income tax policy itself be progressive, but that all incremental changes arising from income tax relief be fully progressive as well, is essentially to erect an unattainable standard no legislation will meet.

None of this is to argue that current tax plans before the Congress are good or bad.  It is only to note that if we are to sensibly evaluate the choices before us, we need to use language and metrics that are transparent and fully informative.  The same tortured logic that holds that tax plans under consideration are giveaways to the rich would also hold that Tom Brady was trending toward becoming the worst quarterback in football in 2012.  Those who argue on either side of the tax policy debate should always strive to present the whole picture -- not just a small, misleading sliver of it.