Andrew Flowers at FiveThirtyEight has an interesting new column on the universal basic income (UBI), which has been gaining traction in policy circles as a potential alternative to the current welfare regime. Finland is considering a UBI experiment, as is the Silicon Valley venture capital firm Y Combinator. The results of such experiments should be illuminating, given that UBI has never been tried on a large scale.

The basic idea of UBI is that instead of a complicated system of welfare programs—TANF, EITC, Medicaid, CHIP, Food Stamps, Section 8, unemployment insurance, etc.—every citizen in the country will receive a check from the government, no questions asked. Proponents argue that this would allow people to spend their money on what they want, replacing a patchwork of programs to take care of housing, food, and every other need individually. Such a system would lead to both an efficiency gain and a reduction in administrative costs. Moreover, it would eliminate the work disincentives built into the current system. Everyone, from Warren Buffett and Jeff Bezos to those below the poverty line, would receive the same cash transfer.

UBI detractors most often cite its cost and potential to promote non-work. Both of these are legitimate objections, to which I would like to add one more: a universal basic income would be near-impossible to reform.

Milton Friedman once observed that “nothing is so permanent as a temporary government program.” The trouble with government programs is that there is usually an interest group behind them ready to fight tooth-and-nail against any reforms, lest they serve to expand the program.

When programs benefit a limited group, it is sometimes feasible to change them. The welfare reform of 1996 is a good example. But a universal program, by construction, provides visible benefits to everyone. Even when a universal program is in dire need of reform, changing it can be next to impossible.

Consider the case of Social Security. There is a reason the program is known as the “third rail” of politics. Almost everyone over the age of 65 collects it, and Social Security benefits represent 39 percent of seniors’ income. The program, which has existed since 1940, has ballooned from less than one percent of GDP in its early years to over five percent of GDP today. Moreover, the program’s expected costs are going nowhere but up. 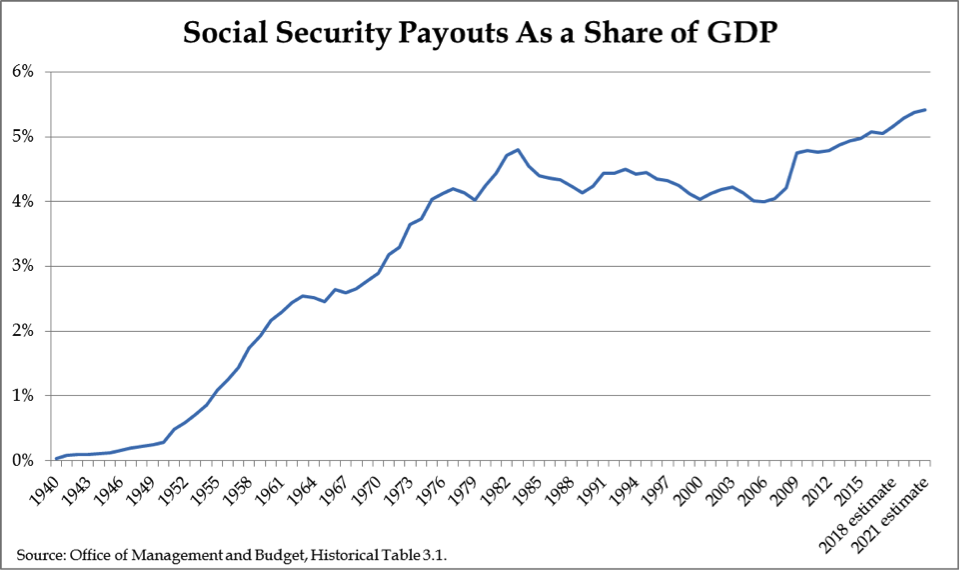 According to the latest Trustees’ Report, Social Security will face insolvency in 2034, when those born in the late 1960s start retiring. At that point it will only have enough funds to pay three-quarters of scheduled benefits. The program needs to either increase revenues (by raising taxes) or reduce benefits (by raising the retirement age or trimming the annual inflation adjustment) in order to remain solvent.

Yet policymakers have taken very little action, with reforms such as “chained CPI” going nowhere in Congress. Sometimes, temporary changes to the program have even gone in the wrong direction. In 2009, Congress authorized supplementary “economic recovery payments” to compensate for the lack of measured inflation and corresponding cost-of-living increase that year. With similarly low inflation in 2015, some members of Congress have clamored for a similar one-time payment this year. There is simply no political will to make necessary changes to such a popular program.

Now imagine a universal basic income, which everyone would receive. Once policymakers pick a benefit level and method of calculating the cost-of-living adjustment, they will be stuck with it for a long time. Most of their constituents are going to be unhappy with any attempt to reduce benefits or trim the inflation adjustment. Like Social Security, once the program is set on autopilot, it will be very difficult to change. Design it wrong, and the federal budget could be stuck with more unsustainable costs.

Or, if UBI ends up creating a large work disincentive and reduces the employment-population ratio to untenably low levels, some sort of work requirement on the program might seem like an attractive reform. Good luck with that if beneficiaries want to keep their basic income regardless of their employment situation.

As economies change, policies must change with them. In the example of Social Security, the economy of 1960 had five workers per retiree and could easily support such a substantial public pension system. Now the economy has less than three workers per retiree and the program’s finances look much shakier. One can imagine that the economy of forty or fifty years from now will look very different from today’s. Institutions such as universal basic income must be able to adapt.

Welfare programs that target their benefits towards specific groups, such as the poor, are easier to reform than universal programs. From a political perspective, an expanded earned income tax credit or negative income tax, with their targeted benefits, would be preferable to a universal basic income. Policymakers should prove they can fix Social Security before adding another large entitlement program to the books.