President Trump’s new executive order aims to reduce poverty by encouraging able-bodied adult welfare recipients to move into the labor force. A similar initiative in the United Kingdom over the past five years has been successful in raising labor force participation.

The new executive order, signed on April 10, directs federal agencies to review and adjust their public assistance programs. The Trump administration wants the federal agencies to reduce the waivers, exemptions, and exceptions for public assistance programs as well as encourage work requirements for these programs. Additionally, the executive order aims to promote flexibility for state and local governments to meet the needs of their residents.

Previously, Seema Verma, the administrator for the Centers for Medicare and Medicaid Services, had approved waivers permitting three states – Arkansas, Kentucky, and Indiana—to put in place work requirements for Medicaid, and more states have expressed interest. However, President Trump’s executive order is the first of its kind to encourage nationwide change.

During the recession, the labor force participation rate decreased while the unemployment rate skyrocketed. But nine years after recovery from the recession, the United States has seen minimal increases in the labor force participation rate despite the unemployment rate remaining steady at 4.1 percent in March and 6.3 million job vacancies reported at the end of January.

Unfortunately, the entitlement system does not support upward mobility of enrollees by assisting them and encouraging them to find work. The new executive order would make federal agencies more accountable for their ability to move people into the workforce. This, along with the addition of work requirements, should lead to fewer Americans being reliant on government support and greater participation in the labor force. 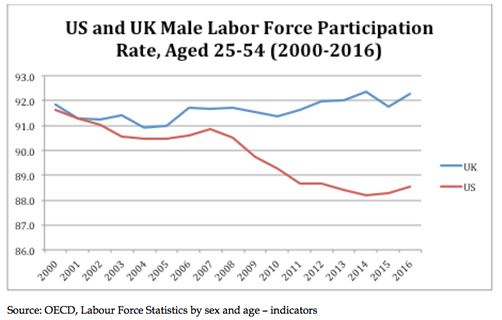 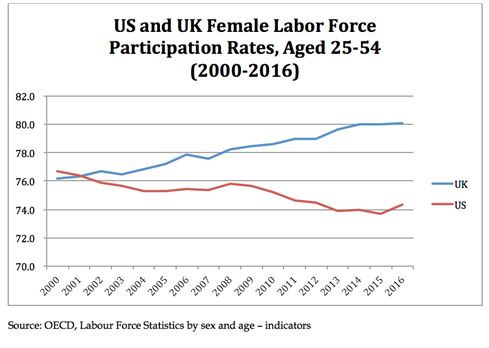 The UK Welfare Reform Act 2012 created one benefit, known as Universal Credit, while slowly eliminating various other programs, including the working tax credit, the child tax credit, housing benefit, income support, income-based job seeker’s allowance, and income-based employment and supportive allowance. In addition to simplifying the programs into one, the Act required claimants to agree to a “Claimant Commitment,” in which they sought the services of a work coach to improve their job prospects and get hired.

Individuals on welfare can be discouraged from pursuing jobs because they fear losing their benefits once they improve their economic circumstances. In the UK, benefits are not reduced at a one-to-one ratio with an increase in wage, but rather benefits decrease by less than the increase in wage. Additionally, the UK government encourages employment by withdrawing benefits if a claimant refuses a job offer. Certain individuals, such as single mothers with young children, are exempt from this requirement.

Emily Top is a research associate at Economics21.