The Education Department has just released a new set of data covering the state of the federal student loan portfolio at the start of the second quarter of 2016. Income-driven repayment, a system of making loan payments commensurate with earnings, is growing more popular. While repayments have ticked up slightly, defaults have also risen. Overall, the release sends some very mixed messages about the condition of nearly $1.3 trillion in outstanding loans.

Here are three major takeaways from the data release. Due to data availability, all statistics here refer to Direct Loans only and exclude residual loans from the now-defunct FFEL program, which guaranteed private loans instead of making them directly.

The default rate is the statistic most quoted in the media to describe how many student borrowers are repaying their loans. About 8 percent of loan balances are currently in default—meaning a borrower has missed payments for a year or more.

However, a borrower might not be making payments on a loan for other reasons. The borrower could be delinquent on a loan—defined as being 30 or more days behind on payments. The loan could also be in deferment or forbearance if the borrower is temporarily relieved from making payments due to economic hardship or other reasons. Add all these together, and nearly half of outstanding direct loan balances for borrowers not in school are not in repayment.

The good news is that the following graph shows that the repayment rate is rising slowly. To be specific, the share of loans in repayment rose from 52 percent last year to 53 percent this year. Two years ago, the repayment rate was 48 percent. Meanwhile, fewer borrowers have delinquent or deferred loans. 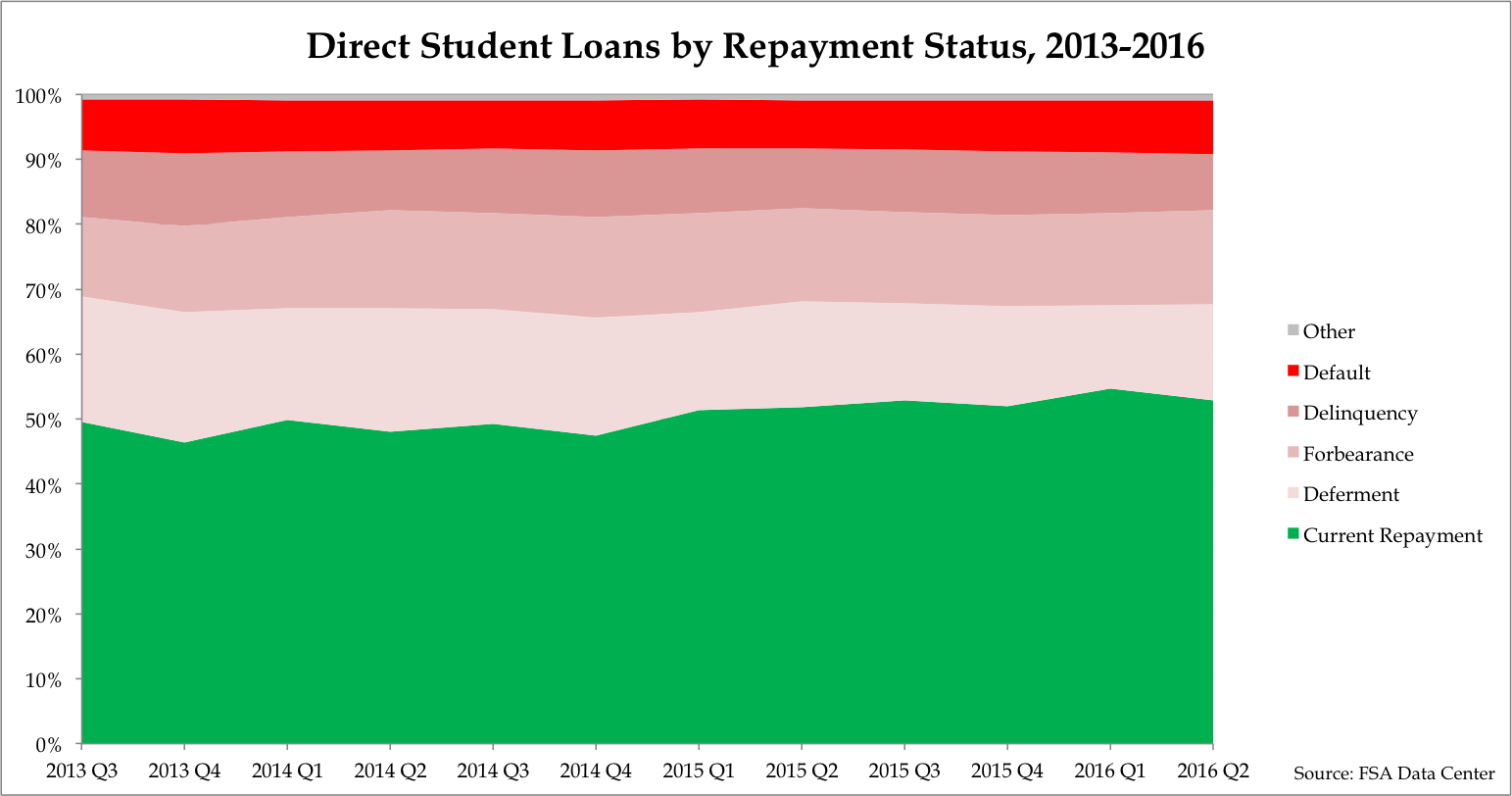 Some Borrowers Are Enrolling in Income-Driven Repayment Plans

One reason for increased repayment rates is the growing popularity of income-driven repayment plans. Rather than making a fixed payment every month, under these plans borrowers can repay a fixed portion of their income. This is good news especially for people who might have a low-paying job or no job at all, since payments go down when the borrower faces financial hardship.

These plans are exceedingly popular, representing 38 percent of repayments in the most recent data release, up from 31 percent last year and 25 percent the year before. 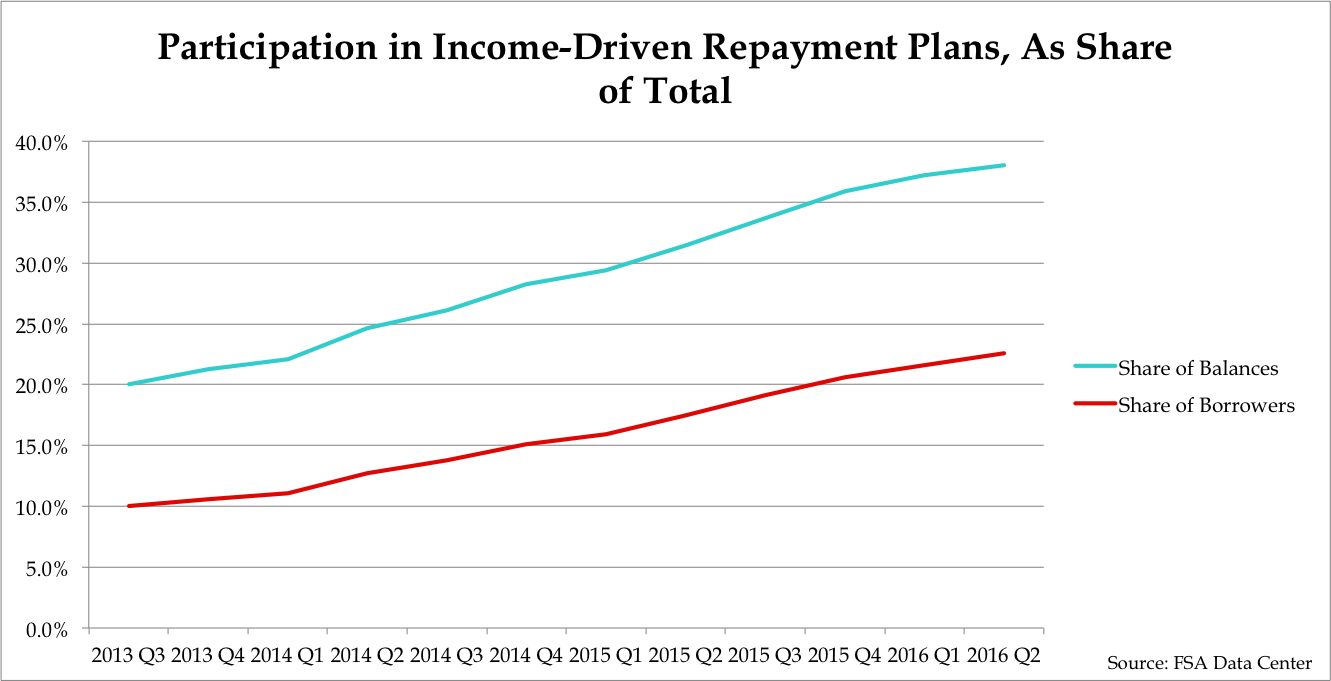 In principle, this is a good way to pay back student loans. However, the current system has a major flaw in that borrowers are allowed to discharge any unpaid portion of their loans after a set period of time. This exposes taxpayers to large potential losses, and such promised forgiveness encourages students to borrow more (and colleges to charge more).

Moreover, the latest data release indicates that the borrowers enrolling in these plans are not the ones who need the most help. Counterintuitively, borrowers with smaller balances are disproportionately in distress, since they are more likely to have attended a cheap, poor-quality college, or to have not graduated at all—indicators which do not bode well for one’s career.

These high balances indicate that many of these borrowers have attended graduate school or elite nonprofits. Higher balances also mean that taxpayers could lose more when the repayment periods eventually run out. 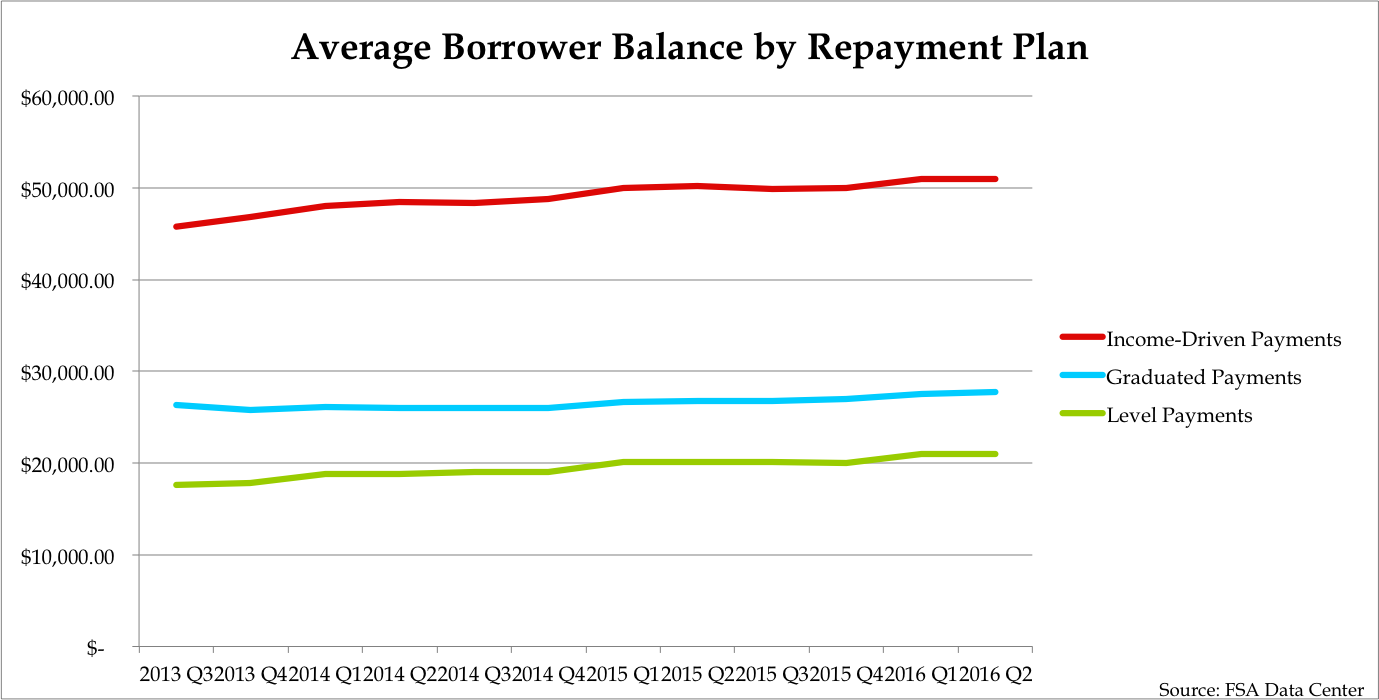 The rising share of student loans in repayment is likely a result of more borrowers using income-driven repayment plans. As discussed above, these plans are good for borrowers, but not necessarily for taxpayers. If they work correctly, they should also bring down default rates, since borrowers in the most distress—those without income—will not owe anything under an income-driven plan.

However, even as income-driven repayment explodes in popularity, default rates are rising. The share of Direct Loans in default is 8.3 percent, up from 7.4 percent last year. While it is not impossible to default under an income-driven plan, it is much less likely.

This suggests that defaults did not fall very much for income-driven repayment plan enrollees because those individuals are already very well-off, and would not have defaulted anyways. Unfortunately, the Department of Education’s data release does not include default rates by repayment plan, so we cannot immediately confirm this, but it is consistent with the evidence that income-driven repayment plans are populated with high-balance borrowers who attended top-quality schools.

Since defaults overall rose, default rates for non-income driven plans must have gone up enough to offset whatever small reduction in defaults the surge in income-driven repayment led to, and then some. The limitations of this data could be masking a substantial amount of trouble at the lower end of the borrower spectrum. Researchers with access to more detailed data ought to investigate this question.