In June 2015 we optimistically forecasted that “Better Times Are Ahead for the Eurozone.” At that moment, we noticed that money growth had accelerated as a result of quantitative easing (QE) and other expansionary policy measures implemented by the European Central Bank (ECB). We also noticed that year-over-year growth in real domestic spending had become somewhat faster, amounting to 1.5 percent in the first quarter of 2015, but we called this a “modest uptick” and saw it mainly as an effect of lower oil prices. Based on the historical relationship between money growth and domestic spending, we suggested that “the most beneficial effects of QE will reveal themselves next year, with even stronger spending growth at the start of 2016.”

This pickup in domestic spending has now occurred, though its effects have been offset to some extent by weaker economic conditions external to the Eurozone. Thus, the ECB’s expansionary policies have succeeded, but must be kept in place until there are clearer signs that the recovery will be sustainable.

The figure below presents the latest data on Eurozone real domestic demand, updating statistics shown in our previous essay. Compared to the 1.5 percent growth rate of real domestic spending in the first quarter of 2015 referred to above, the rate of real spending growth reached 2.3 percent in the fourth quarter of 2015 before decreasing only slightly to 2.1 percent in the first quarter of 2016. These achievements should be assessed from a historical perspective. As the graph also reveals, the last time the rate of calendar-adjusted real domestic spending growth was higher than 2 percent was in 2007, before the Great Recession started. Thus, the stronger spending growth we predicted has occurred: the ECB’s policies have worked. 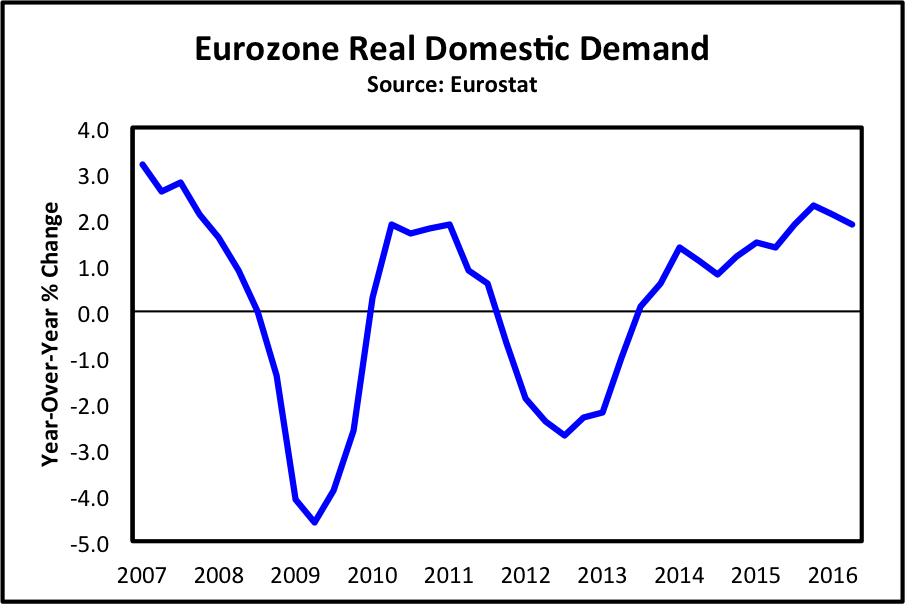 Aggregate output growth in the Eurozone has been more sluggish, however. In the first quarter of 2016, for example, real GDP growth was only 1.7 percent, while the change in the volume of domestic spending, as already mentioned, amounted to 2.1 percent. The main reason for this difference is weak external demand for the Eurozone’s goods and services. Indeed, the contribution of real net exports to output growth was negative: about minus 0.2 percentage points. Without that negative contribution, real GDP growth would have been 1.9 percent. It can therefore be concluded that the positive effects of the ECB’s policies on economic growth have been partly offset by weak external demand.

It should also be mentioned that economic growth has been much higher in some previous years. In the first quarter of 2011, for example, when the Eurozone was still recovering from the Great Recession and before it was hit by the sovereign debt crisis, real GDP grew at the rate of 2.8 percent. In this case, however, the contribution of real net exports was strongly positive, adding about 0.9 percentage points. External circumstances were very favorable back then.

In addition to external headwinds, internal troubles have surfaced in 2016, including mass strikes in France and banking problems in Italy. Uncertainty related to the Brexit referendum probably also played a negative role. As a result, growth in both domestic spending and real GDP declined in the second quarter of 2016, to 1.9 and 1.6 percent, respectively. Furthermore, the latest data on international trade look particularly worrying, as they show that the value of manufactured goods (excluding petroleum products) exported from the Eurozone in July decreased more than 10 percent in comparison to the same month last year. The United States, in particular, significantly reduced its goods imports from the Eurozone. If confirmed and repeated in following months, these data would indicate a major deterioration of external conditions.

The ECB expanded its QE programs in April, increasing monthly purchases of assets from 60 billion Euro per month to 80 billion and introducing a new series of subsidized long-term loans to banks. But, as our graph indicates, even stronger measures are needed to counteract the effects of negative external factors and to sustain last year’s pick-up in money growth. The ECB should continue to aggressively stimulate domestic aggregate demand until there are clearer signs that its targeted level of inflation “below, but close to, 2 percent,” will be achieved.

Peter Ireland is a Professor of Economics at Boston College and a member of the Shadow Open Market Committee. Darko Oračić is an Economic Analyst at the Croatian Employment Service; his views expressed herein do not necessarily reflect those of that institution.