Minimum wage laws are much in the news these days. New York, California and various US cities have recently enacted legislation to raise minimum wage requirements to $15 an hour. In this context it is especially worthwhile to revisit the purpose and effect of minimum wage laws.

The minimum wage debate is often reported as though it is about the first of these two policy issues. It is actually about the second.

If society’s pertinent policy objective were to ensure that workers receive a minimum level of support for their labor, we would almost certainly pursue this objective very differently than through minimum wage laws. Federal or state governments could provide direct income support to workers, which could be designed to be a function of their employment earnings or even of total work hours. Society could make a transparent value judgment about how to balance the income needs of workers with the level of support others are willing to finance. The costs of this support could be broadly distributed among all taxpayers rather than concentrated on certain business activity. Importantly, such a policy would not create direct barriers between low-income workers and jobs.

Thus we don’t enact minimum wage laws primarily to ensure income adequacy for workers, which could be done in less problematic ways. The more accurate way to think of minimum wage law is as a government decision to prohibit low-wage employment. Such law expressly prevents an employer from hiring a worker for a job earning less than the legislated minimum wage, even if that worker would otherwise consider it in his/her interest to accept it.

Government does not and cannot compel employers to hire workers and pay them a given wage. What government does instead through minimum wage laws is to prohibit employment at lower wages. There is no guarantee that every job made illegal by this prohibition will be replaced by another higher-paying one. Indeed it is a virtual certainty that at least some jobs will not be.

Thus, minimum wage laws reduce employment. Even without an advanced mastery of economics it is easy to understand how. If the price of something (in this case labor) is raised, a purchaser (in this case a potential employer) is not only less willing but less able to buy it. To construct a deliberately extreme example; if you could hire a plumber for $1 to unplug your drain, you would probably be delighted to do so. If instead the government required that you pay a plumber $10,000 to unplug it, you would almost certainly find a way to just do it yourself. The job would simply be eliminated. It is difficult to say for certain where this line is crossed for every job – but every job has such a line. Minimum wage laws push the lowest-skill workers from the employable to the unemployable side of that line.

None of this is to denigrate the motives of those who advocate raising such barriers to employment. To some eyes it is a form of exploitation if work is performed for pay below a certain level. Returning to our example of the plumber; some might regard it as unacceptably unfair to pay him only $1 to unplug your drain – holding this viewpoint so strongly that they would forbid the two of you from mutually agreeing to the transaction. That the job might simply be eliminated strikes some as an acceptable price to prevent this perceived exploitation. The same logic holds that it would be preferable for a person to remain unemployed than to perform a low-wage job at, for example, Walmart or McDonald’s.

This means however that minimum wage laws inevitably price some workers out of the job market. Workers most vulnerable to displacement include those with the weakest job skills, perhaps because they lack sufficient education or training, or because they are young workers just entering the job market. Specific sectors such as the restaurant business often operate with thin profit margins that leave them little room to adjust to sudden changes in their labor costs other than by eliminating jobs.

An underrated problem with pricing low-skill workers out of the job market is that their earnings losses are not limited to their period of unemployment. It is usually while holding a job that an individual acquires the skills necessary to achieve higher future earnings. It is therefore usually better for that individual to be employed for a low wage than not to be employed at all. This too is widely recognized. A working paper from the Boston Fed recently found that “the earnings of displaced workers do not catch up to those of their nondisplaced counterparts for nearly 20 years.” As the paper further states, “the longer a worker is unemployed, the more his or her skills. . . depreciate, making the worker less valuable to a new employer.”

This effect is of particular concern right now when young adults – those most often harmed by minimum wage increases -- are falling out of the workforce in rising numbers. No one knows for sure why this is happening, but the effect on these workers will be lower earnings for many years to come. This trend, as seen in Figure 1 reproduced from the St. Louis Fed, should give lawmakers pause before erecting further barriers to employment. 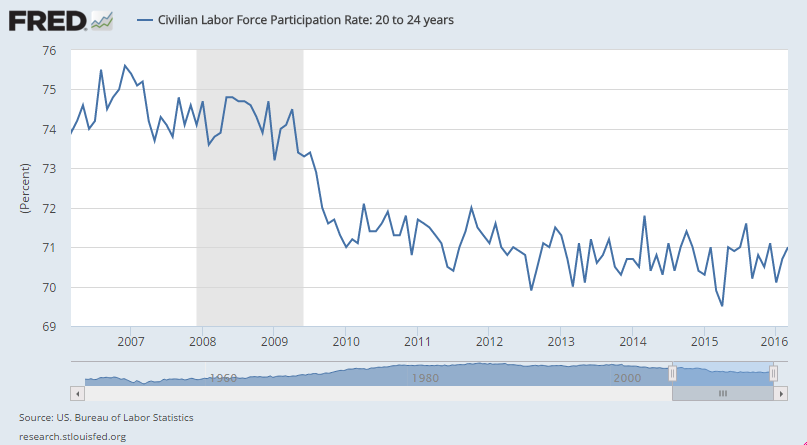 It is appropriate for lawmakers to consider policies to raise worker living standards, including the compensation they receive for their labor. The amount of income support low-wage workers should receive beyond the amount they can freely earn is an important societal value judgment. However, it is a separate value judgment from whether and where to set a minimum wage, which is instead effectively a decision about how stringently to prohibit individuals from working.