If we want to make headway on improving public policy discourse, a good place to start might be with how we’re debating Medicaid policy, in particular how it might be affected by pending legislation to repeal and replace the Affordable Care Act (ACA), including legislation presented on Thursday by Senate Republicans.

Medicaid has long been on an unsustainable cost growth trajectory.  This was true long before the ACA was passed in 2010, though the ACA exacerbated the problem.  Annual federal Medicaid spending is currently projected (see Figure 1) to grow from $389 billion in 2017 to $650 billion in 2027.  The biggest problem with that growth rate is that it’s faster than what’s projected for our economy as a whole.  As with Social Security and Medicare, Medicaid costs are growing faster than our ability to finance them. 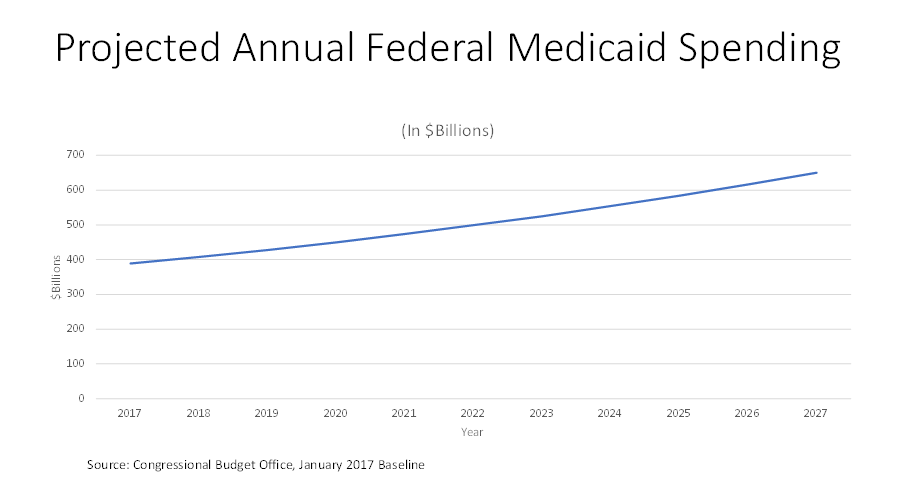 Medicaid serves a sympathetic low-income population.  This purpose, however, does not lessen the necessity of placing the program on a financially sustainable course.  Nor does it eliminate lawmakers’ obligation to prioritize how Medicaid dollars are best spent; to the contrary, it magnifies it.  Lawmakers face the conflicting pressures of targeting Medicaid resources to where they are most needed, while also limiting aggregate spending growth to a sustainable level.

This situation creates irresistible political opportunities for those inclined to exploit them.  Whenever lawmakers take on the unenviable job of moderating cost growth to sustainable rates, these can be and are described as heartless “cuts” relative to existing law – even though existing Medicaid law cannot be maintained indefinitely. This creates a Catch-22; the existence of an untenable Medicaid cost growth baseline both mandates responsible action to repair it, while also establishing a warped basis for comparison that amplifies the political hazards of doing so.

We have seen this dynamic operate with full force in the recent public debate over efforts to repeal and replace the ACA, including its Medicaid provisions.  Countless editorials and news articles have portrayed an intent by Congress to “gut” Medicaid to pay for “tax cuts for the rich.”  This intensifying drumbeat has led to disturbing vitriol and threats against legislators, based on gross mischaracterizations of the implications of pending legislation.  Consider for example an op-ed recently published in the New York Times:

“Imagine your mother needs to move into a nursing home. It’s going to cost her almost $100,000 a year. Very few people have private insurance to cover this. Your mother will most likely run out her savings until she qualifies for Medicaid. . . Many American voters think Medicaid is only for low-income adults and their children — for people who aren’t “like them.” But Medicaid is not “somebody else’s” insurance. It is insurance for all of our mothers and fathers and, eventually, for ourselves. The American Health Care Act that passed the House and is now being debated by the Senate would reduce spending on Medicaid by over $800 billion, the largest single reduction in a social insurance program in our nation’s history. . . . Many nursing homes would stop admitting Medicaid recipients and those who don’t have enough assets to ensure that they won’t eventually end up on Medicaid. Older and disabled Medicaid beneficiaries can’t pay out of pocket for services and they do not typically have family members able to care for them. The nursing home is a last resort. Where will they go instead? . . . Draconian cuts to Medicaid affect all of our families. They are a direct attack on our elderly, our disabled and our dignity.”

Most anyone reading such an editorial would come away with the fear that pending legislation would threaten the access of the elderly and disabled to Medicaid services.  It wouldn’t.  The elderly and the disabled who were eligible for Medicaid prior to the ACA would remain eligible after its proposed repeal.  The ACA’s Medicaid expansion population involved childless adults under the age of 65, a different category of beneficiaries altogether.

The large projected expenditure reduction under the AHCA (the House’s repeal-and-replace bill) actually has nothing to do with disabled or elderly Medicaid beneficiaries but rather with changes in projected enrollment for the ACA’s expansion population.  Doug Badger estimated in a recent paper that 82% of the Medicaid savings projected for the AHCA by CBO arose from changes to projected enrollment patterns – not from anything that would undermine care for the person profiled in the Times op-ed.  The story is likely to be quite similar under the recently-unveiled Senate bill.

The Chief CMS Actuary recently weighed in with its own estimate of 10-year cost savings of $383 billion over ten years from the House bill’s Medicaid provisions – less than half the savings projected by CBO.  A primary difference between the two estimates has to do with what CMS and CBO respectively believe would happen if the ACA remained on the books.  CMS projects that under a continuation of the ACA, the proportion of the potentially newly-Medicaid-eligible population living in Medicaid-expansion states would remain at its current 55 percent.  CBO by contrast assumes that additional states would expand Medicaid if the ACA remained law.  CBO further assumes that many fewer people will participate in Medicaid if the ACA is repealed, even if they remain fully eligible to do so.  The bottom line is that the essential difference between these two assumptions has nothing to do with people now on Medicaid losing their access to coverage.

It is fair to be concerned that fewer people would receive Medicaid coverage in the future under pending legislation than under the ACA. However, current projections bear no resemblance to a picture in which people historically dependent on Medicaid would lose their benefits.  To the contrary, CMS estimates (see Figure 2) that Medicaid enrollment would stay roughly constant at current levels under the AHCA, while still being substantially higher than projected before the ACA was passed.  Indeed, CMS finds that many states would still cover some of the ACA expansion population even if lawmakers do away with the ACA’s inflated federal matching payment rates.  This would mean expanded coverage relative to pre-ACA levels, while also being more equitable than the ACA. 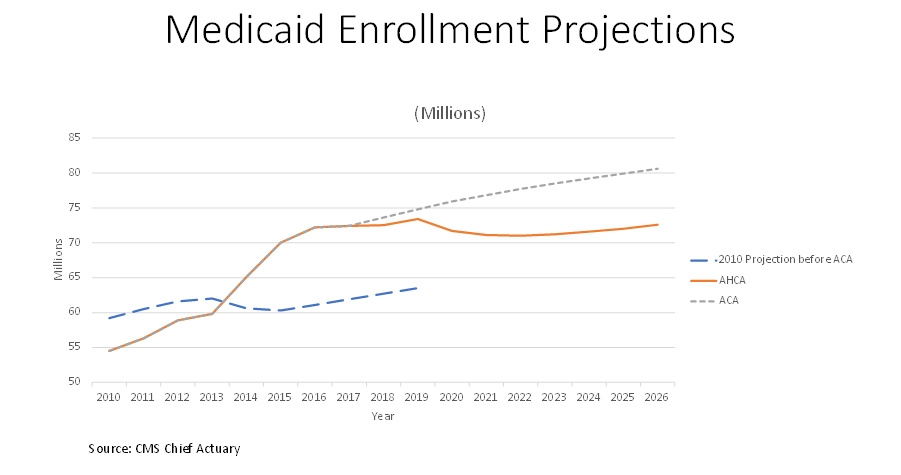 It is also fair to wonder about the long-term effects of per-capita growth caps proposed under both the AHCA and the Senate bill – though not relative to unsustainable promises under current law, but rather to an alternative method of attaining financial sustainability.  But no one should associate figures such as $800 billion in cuts with these proposed caps. As previously described, most of CBO’s projected cost reduction is unrelated to the concept, while CMS’s estimate of the caps’ budgetary effects is well less than 10% of that amount.

It is perfectly appropriate for there to be a vigorous, even impassioned debate about whose proposals would provide the best way forward for the Medicaid program.  But we ill serve the public with misleading, incendiary rhetoric about vulnerable elderly being ejected from nursing homes so that cruel politicians can provide tax cuts to the rich, when nothing under consideration can be fairly described as doing any such thing.  If advocates want their health policy arguments to be taken seriously, and to usefully inform the American public, groundless hyperbole should be shelved in favor of a focus on what existing proposals would actually do.