Political observers are often justified in feeling a certain cynicism about budget process reform proposals.  Frequently elected officials promise budget process reform as a way of appearing fiscally responsible, without making the hard choices to contain federal entitlement spending growth that true fiscal responsibility requires.  Too many budget reform proposals also fall into many problematic categories; for example, proposals to save lawmakers time without necessarily improving fiscal outcomes; or proposals to advantage one party’s fiscal policy views over the other’s.  It is the rare reform proposal that would improve the precision and transparency of the federal budget process while likely improving fiscal outcomes, without preferentially advantaging either party’s policy agenda.

In this context, the recent budget reform proposal of House Budget Committee Chairman (and nominee to be HHS Secretary) Tom Price (R-GA) is worth noting.  It contains several promising elements, of which this article focuses on one.  In essence, the reform would change budget scoring to recognize that programs such as Social Security and Medicare are by law not permitted to spend in excess of the resources in their respective trust funds.  The layperson may not immediately grasp why this is so significant, so it is worth spelling out in detail.

Under federal law, certain programs such as Social Security and Medicare are only permitted to spend money from trust funds created specifically for that purpose.  Put simply, if their trust funds run out, they can’t pay.  That’s why in 1983, lawmakers had to make a number of abrupt changes to Social Security – delaying COLAs, taxing benefits, and bringing in federal employees, among others.  Without those changes the trust funds would have run out and benefit checks would have been interrupted.  It was for similar reasons that the 2010 Affordable Care Act (ACA) contained several changes to reduce the growth of Medicare Hospital Insurance (HI) payments.  Without such provisions, Medicare participants would be threatened by an interruption in benefit expenditures several years earlier than they now are (2028).

How this works can be seen in financial projections like those in the 2016 Social Security trustees’ report.  That report contains the following figure (Figure 1), showing that under current law, disability insurance (DI) benefit payments would be suddenly reduced in 2023 due to trust fund reserve depletion. 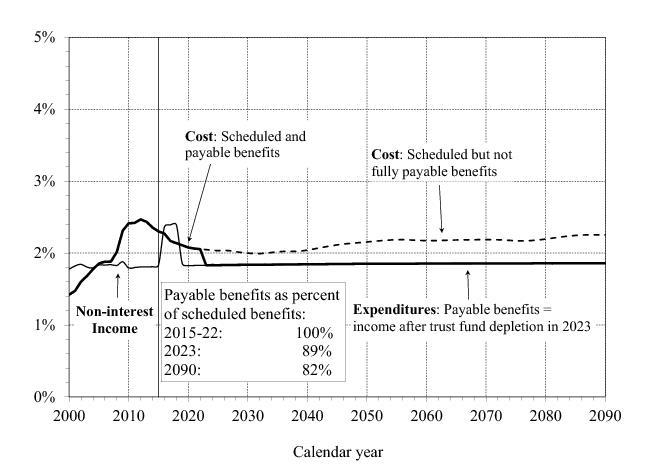 The graph shows that current law will restrict Social Security benefit payments to lower levels than beneficiaries may now believe they are promised.  This is important to recognize, but Congress’s budget conventions do not do so. Instead the scorekeeping rules assume that lawmakers will at some future point override existing law and allow Social Security and Medicare to pay benefits well in excess of their trust funds’ spending authority.  Historically this has never happened.  In sum, the scorekeeping rules are at variance not only with the law but with all prior historical practice.

From a budget integrity perspective, this produces several problems.  I have written previously about some of the more problematic implications, which I will briefly summarize here.

For these and other reasons I have previously written that Congress should consider repairing the budget scorekeeping rules.  Other budget watchdogs, such as the Committee for a Responsible Federal Budget, have made similar proposals.

Fixing this budget loophole would inhibit future budgetary mischief such as increasing Social Security and Medicare spending beyond what current law allows without paying a scorekeeping penalty.  Had it been in place when the ACA was considered, it would have exposed the fact that the law’s Medicare savings were being allocated twice over – once to extend the solvency of the Medicare HI trust fund (and thereby to permit higher benefit spending during the extension period), and a second time to finance the ACA’s coverage expansion.  Accurate scorekeeping would have recognized that the ACA increased federal deficits by spending its projected savings in two simultaneously different ways, a fact that nonpartisan budget watchdogs struggled mightily to explain in the face of misleading budget conventions.

I am personally agnostic on whether the budget scorekeeping rules should rely exclusively on the true-law baseline espoused in the Price proposal, or whether lawmakers should continue to make use of the current convention in addition to one accurately reflecting trust fund law.  But at the very least, lawmakers, press and public should be informed when legislation adds to federal deficits relative to previous law.  The Price proposal would provide this information for a whole category of fiscally significant legislation.  Had it been in place years ago, federal finances would almost certainly be in much better shape than they now are.