Lawmakers Can’t Afford to Give Up on Fixing Obamacare

Last month congressional efforts to repeal and replace the Affordable Care Act (ACA) came to a screeching halt when the House leadership couldn’t muster the votes to pass the American Health Care Act (AHCA). While it’s unclear how long lawmakers will put the effort aside, they cannot afford to simply abandon the objective. As my latest study published this morning by the Mercatus Center analyzes in detail, the fiscal damage being caused by the ACA is simply too great to leave uncorrected.

Health care policy involves difficult trade-offs with implications affecting the health and income security of millions of people; its effect on federal finances is only one factor lawmakers must consider.  But fiscal implications cannot be ignored, as we are reminded by the Congressional Budget Office’s latest projections of unsustainable federal debt accumulation.

The fiscal damage caused by the ACA is of such a magnitude that much of the press and policy commentariat continues to have difficulty wrapping their minds around it.  Before President Obama took office, federal debt held by the public stood at less than 50% of GDP and there was a solid expert consensus that federal health spending growth constituted a dire threat to long-term fiscal stability.  And yet the ACA added further to this fastest-growing part of federal spending, even under the most optimistic projections for the law.  Today federal debt held by the public is 77% of GDP and growing, while federal health spending obligations are greater than ever before.

Many of the provisions initially designed to pay for the ACA’s dramatic expansion of federally subsidized health insurance coverage have been repealed, suspended, postponed, weakened, or otherwise not implemented.  In my 2012 study, “The Fiscal Consequences of the Affordable Care Act,” I anticipated some, but not nearly all, of this fiscal slippage.  The 2012 study correctly anticipated that the ACA’s Cadillac plan tax might not produce the full amount of revenues projected, and that its cost-containing Independent Payment Advisory Board (IPAB) might prove too controversial to ever become operational.  But the subsequent deterioration of the ACA’s financing proved more severe than even these pessimistic predictions, due to the suspensions of the ACA’s health insurance fees and medical device tax, postponement and weakening of its individual and employer mandate penalties, and repeal of the CLASS long-term care program (which had been projected to produce a surplus over Congress’s ten-year budget window).

Table 1 shows how key ACA financing mechanisms have deteriorated relative to initial projections.  CBO initially scored the ACA as reducing federal deficits by $124 billion from 2010-19 relative to Congress’s budget baseline.  That scorekeeping method effectively mandated that the ACA’s Medicare Hospital Insurance (HI) cost savings be doubly counted – once to extend the solvency of the HI trust fund, and a second time to finance the ACA’s coverage expansion (further details on this technical, but critical, point are available in my study).  Adjusting for this scoring quirk, I projected in 2012 that the ACA would add $346 billion to federal deficits from 2012-21.  Bottom-line, the ACA’s finances have turned out worse than projected, relative to either baseline.

Regardless of what has happened to date, what matters now are the choices going forward.  My latest study explores the fiscal ramifications of repealing and replacing the ACA, while detailing various factors that could cause the savings to be either more or less than currently projected.

The most encouraging news from the study is that the fiscal benefits of repeal may well be substantially larger than can be gleaned from any CBO report.  This result has nothing to do with any fault of CBO’s, and indeed lawmakers should resist the temptation to attack CBO if they disagree with its estimates.  CBO has certain charges it must meet; it must make a single best-guess estimate even when there is a wide range of projection uncertainty.  And CBO must also project the effects of the ACA as currently written – not as it has been, or is likely to be, implemented.

For example, CBO must assume that going forward the ACA’s Cadillac plan tax, health insurance fees, and medical device tax will together produce escalating streams of federal revenue, even though to date legislators’ tendency has been to suspend or postpone these taxes, while adding the resulting revenue loss to the deficit.  The ACA, whose finances depend greatly on these taxes, thus threatens to add far more to federal deficits than a hypothetical replacement plan that does not.

A number of factors – ranging from the policy choices made in repeal legislation, to assumptions for economic variables and counterfactual legislative behavior – could plausibly push the ten-year savings from repealing the ACA’s full array of spending and taxes up above $1 trillion over ten years.  The fiscal improvement could approach this magnitude if one recognizes that many of the ACA’s various taxes might never be collected anyway; if lawmakers include repeal of the ACA’s various insurance market rules; and if government forecasters are continuing to underestimate the per-capita costs of the ACA’s Medicaid expansion (see table 2).

On the other hand, the savings could be less than currently projected if CBO is continuing to overestimate future participation in the ACA’s exchanges or if, as some have argued, CBO is overestimating the decline in Medicaid coverage under repeal-and-replace legislation (see table 3 and Figure 1). 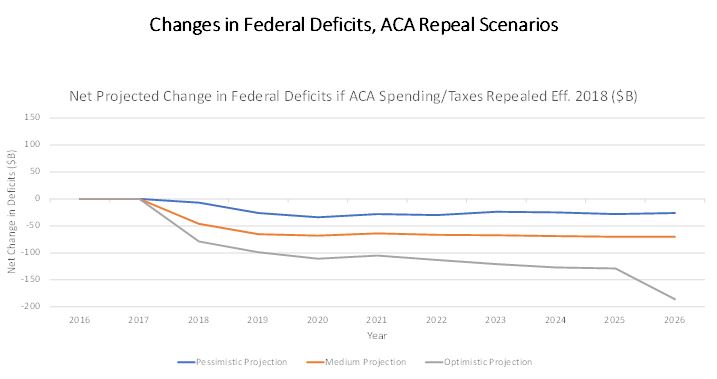 Stepping back from recent efforts to repeal and replace the ACA is a setback from some perspectives, but also affords lawmakers more time to get the policy right.  A key decision in this respect is how best to replace the ACA’s Cadillac plan tax, ideally with an alternative policy that scales back the damaging effects of the longstanding tax distortion favoring employer-sponsored health benefits over take-home pay.  In addition, care should be applied to the contours of any replacement provisions aimed at maintaining health insurance coverage, lest they perpetuate the fiscal problems the ACA created.

Regardless of how these and other policy dilemmas are resolved, lawmakers cannot afford to give up on enacting fiscal corrections to the ACA.  A comprehensive analysis of the situation shows the fiscal stakes are far too great.