Killing Obamacare Should Mean Killing Its Investment Tax, Too

Congressional Republicans hoping to repeal and replace Obamacare are reportedly considering retaining the law’s surtax on investment income that applies to upper-income taxpayers.  The political appeal of the 3.8 percent Net Investment Income Tax (NIIT) is obvious: It is easy to beat up on rich investors while (supposedly) retaining $172 billion over the decade for health care for low-income Americans. Yet as is often the case, the easy politics reflect shortsighted economics.

First and foremost, the NIIT should be repealed because it is part of a law that Republicans have been promising to repeal and replace since 2010. If Obamacare is truly illegitimate — passed with creative parliamentary maneuvers and sold with dishonest promises to voters — then the law’s tax increases are just as illegitimate as its health-coverage provisions. Media attempts to portray these tax repeals as unrelated “tax cuts for the rich” should not trick lawmakers into leaving Obamacare taxes in place under the naïve illusion that it will satisfy liberal critics of the GOP health plans. Repealing Obamacare means also repealing the law’s taxes, period.

Second, killing the NIIT is key to unshackling the sluggish economy. Long-term economic growth requires a growing capital stock and healthy productivity growth. Policies that encourage investment further both these ends. Thus, high investment taxes are among the most destructive economic policies.

In fact, the chart below shows a near-perfect link between business investment and private-sector job growth. Obviously, part of the correlation can be explained by outside economic growth factors providing opportunities for both new hiring and investment (and economic downtowns reducing both). But it is also undeniably true that new investment provides the new capital and productivity necessary for new businesses to form and existing businesses to expand. This is especially important because, from 2007 through 2014 (the latest data available), the number of firms in America actually fell by 182,000 — a nearly unprecedented collapse of entrepreneurship. 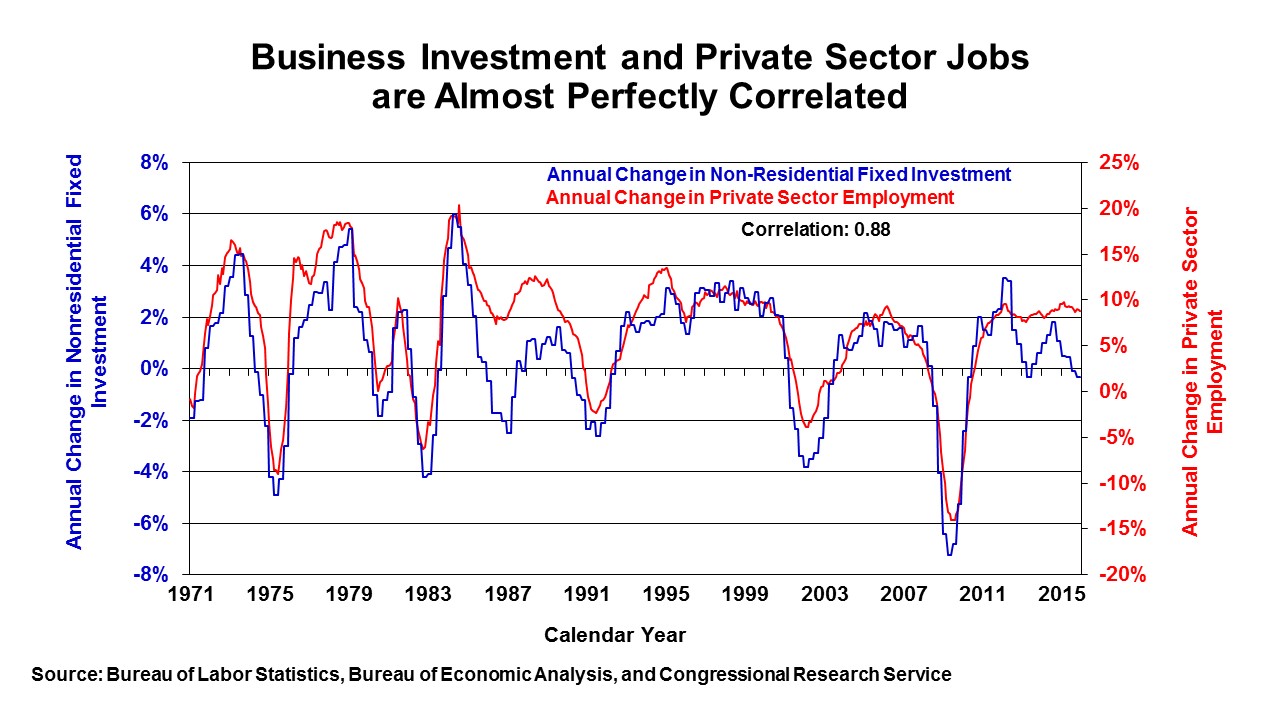 Not surprisingly, the Tax Foundation estimates that eliminating the NIIT would create 133,000 jobs and raise incomes across the board through faster economic growth. It would also lower the sixth-highest capital-gains-tax rate in the OECD.

The Congressional Budget Office’s warning that repealing the NIIT would cost Washington $172 billion over the next decade should be taken with a grain of salt. Investment is extraordinarily tax sensitive because — unlike wage income, sales, or property taxes — investors and businesses have wide latitude to time their decisions to lower tax rates. Additionally, high investment tax rates reduce overall new investment, eroding the tax base.

Critics typically dismiss these short-term revenue responses as part of the “lock-in effect,” whereby investors sell their assets and pay taxes after a tax cut, while holding onto assets and avoiding taxes when rates are high. They assert that over a longer period, these timing tricks fade away and higher tax rates bring higher revenues.

But longer-term analysis does not help their case. After that 2003 capital-gains-tax cut, CBO reduced its 2003–12 capital-gains revenue estimate from $761 billion to $653 billion. Actual revenues still came in at $760 billion despite the historic stock-market crash during that period.

Overall, 1954–2014 Treasury data show a negative correlation (-0.31) between the top capital-gains-tax rate and capital-gains revenues as a percentage of the economy — a time window that well exceeds the lock-in effect of new policies. This should cast doubt on CBO’s contention that eliminating the 3.8 percent surtax would significantly reduce capital-gains revenues. The story is likely similar for dividends, interest, and other investment income caught in the NIIT.

High investment taxes can hurt the rest of the budget as well. Budget-sensitivity tables show that tax policies reducing the annual economic growth rate by a mere 0.1 percentage points would cost the budget $313 billion in lower tax revenues and higher spending over the decade.

Finally, far from a giveaway to the rich, investment taxes often represent double taxation of dividends that were already taxed at the corporate level, and of capital gains that were taxed when the money was initially earned, before being invested. And unlike income taxes, capital-gains taxes are also imposed on the portion of investments whose growth is merely reflecting inflation.

Retaining high investment taxes on businesses and upper-income families can generate a few days of populist headlines. However, long after that news cycle has been forgotten, voters will judge their lawmakers on whether the economy is growing, creating jobs, and raising wages. Repealing Obamacare’s harmful investment taxes — as promised — can encourage the investment our lethargic economy sorely needs.

Brian Riedl is a senior fellow at the Manhattan Institute and a member of MI's Economics21. Follow him on twitter @Brian_Riedl.