The Soviet Union collapsed in central Asia in 1991. Now, twenty-six years later, another barrier to markets and prosperity may be about to fall in one of the world’s most closed economies.

This week the government of Uzbekistan unveiled a proposal to liberalize the country’s currency regime. The national currency, the som, has long had two exchange rates with foreign currencies. The overvalued official exchange rate is currently 3,176 som to the dollar. The black market rate, which is more reflective of the currency’s true value, was estimated earlier this year to be nearly 6,000 som to the dollar. 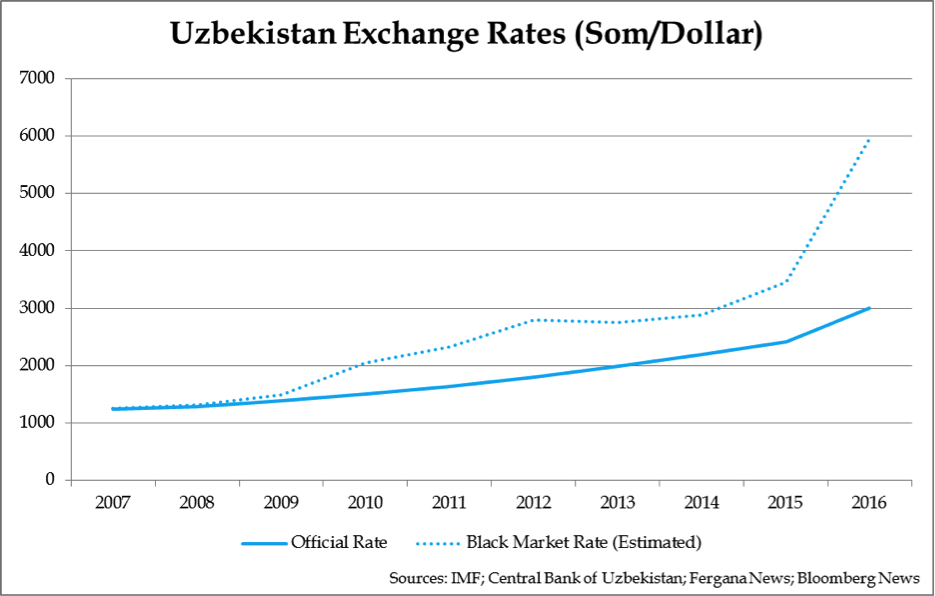 Put another way, exporters must sell their foreign-currency revenues on the cheap, because of the overvalued official exchange rate. The same phenomenon should help importers, but only a handful of politically-connected businesses have the right to import. With its two-tiered currency regime, Uzbekistan has found a way to make life miserable for both exporters and importers.

The draft reform proposal, which was issued by acting President Shavkat Mirziyoyev, outlines a number of reforms. The proposal is written in Uzbek and Russian only, but English-language summaries are available from regional news outlets EurasiaNet and AzerNews.

Fortunately, other provisions may serve as checks on an overzealous central bank. The reforms would lighten requirements for exporters to turn over foreign currency at the official exchange rate, with some exceptions to be determined. The government would also ease regulations limiting the amount of currency individuals may carry in and out of the country.

Perhaps most importantly, the reforms would allow “individual entrepreneurs without a legal entity to pay for imports of goods and services…through their bank accounts.” The provision also allows such entrepreneurs to buy foreign currency with which to pay for imports—a privilege currently reserved for a select few. If enacted, this provision would undercut the system of import licenses that makes doing business difficult for anyone without political connections.

It would also force the Uzbek central bank to keep the official exchange rate in line with the market rate: allow anyone to buy dollars for som through official channels at a below-market price, and the central bank will quickly run out of dollars.

The government will accept comments on the proposal until December 14. The country will also hold a presidential election this Sunday, which is likely to result in an easy victory for acting President Mirziyoyev. While the acting president was an ally of Uzbekistan’s late dictator, Islam Karimov, the change his premiership will bring still offers an opportunity to shake up the country’s currency regime.

The government’s currency reform proposals are promising, but Uzbek entrepreneurs should not hold their breath. Given the country’s reputation for corruption and its longstanding hostility to private enterprise, action—not words—should be the metric by which the Uzbek government is judged. Let us hope that President Mirziyoyev, quite literally, puts his money where his mouth is.

Latest on Economics: Other

One (Small) Cheer for Gavin Newsom on Homelessness