The most recent release of Treasury yields has determined student loan interest rates for the coming year. Rates for the 2016-17 academic year have fallen by just over half a percentage point across the board relative to this year. Three out of the four loan categories are at their cheapest for students since fixed rates were introduced in 2006. 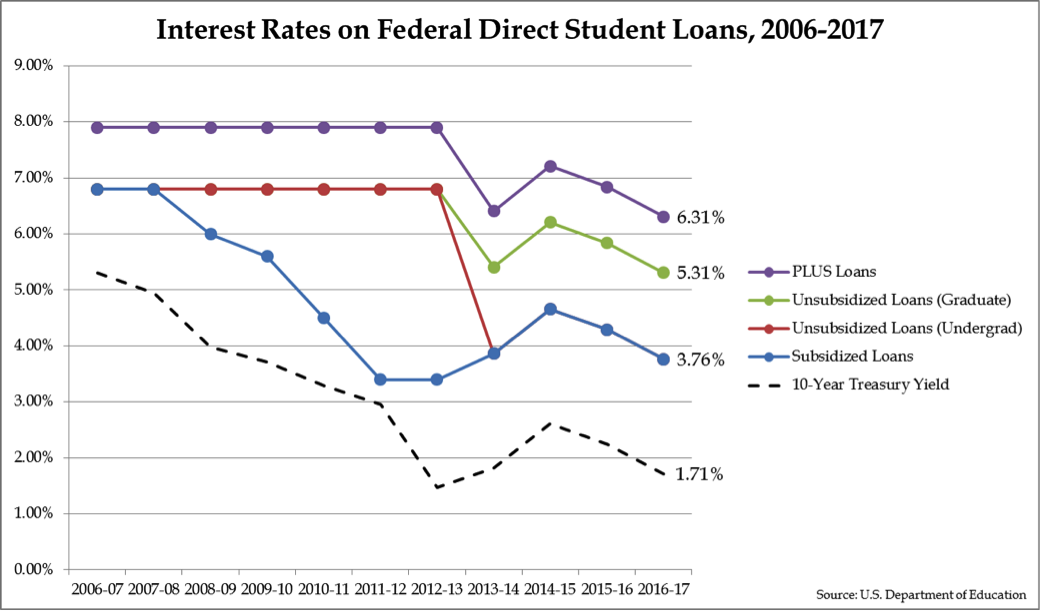 Students may be able to enjoy lower interest rates for some time. The Feddid not raise its benchmark interest rate at its most recent meeting. While Treasury rates are not directly linked to Fed decisions, they eventually follow suit when the Fed decides to raise rates. According to the Economist, the Fed was originally expected to raise rates four times in 2016—now it may not happen even once.

Despite the record lows, Democratic presidential candidates Hillary Clinton and Bernie Sanders have called for cutting interest rates on student loans, and Republican Donald Trump has implied that rates are too high. (Though with Trump, can anyone really tell?)

So, are rates too high or too low? According to estimates released by the Congressional Budget Office, taxpayers are set to lose $170 billion on the federal student loan program over the next ten years. This undercutspoliticians’ claims that the federal government is profiting off student loans, and therefore interest rates must go down. Given losses of such magnitude, interest rates are almost certainly too low.

But aren’t taxpayer losses justified, since lower interest rates help distressed borrowers? Not really. As I wrote last week, those former students with the highest default rates have the lowest average student loan balances. This is because students at risk of default attend cheaper, poorer-quality institutions and frequently do not finish, and thus end up with lower balances. Cutting student loan interest rates is a highly regressive way to help borrowers.Benefits will flow to those who have borrowed the most—graduates of prestigious law schools and MBA programs who will likely have few problems paying down their debt.

Before fiddling with interest rates, it is worth considering the goals of federal involvement in higher education. If student loans (along with Pell Grants and various tax incentives) are aimed at reducing the financial burden on poor and middle-class households, then they have largely failed, as research finds that federal student aid has been the primary (if not the only) driver of outsize increases in college tuition.

By contrast, if the federal government seeks to promote access to higher education for the sake of its broader societal benefits, then regressive cuts to student loan interest rates are surely not the way to go. That will require more sophisticated reforms to ensure that high schools are adequately preparing students for college (or alternative paths) and that colleges are not simply siphoning up students’ tuition dollars without ensuring they graduate and land good jobs. As is the case in so much of public policy, throwing money at the problem is a woefully inadequate solution.

This column originally appeared on Forbes.