Cook County’s sweetened beverage tax went into effect yesterday after a judge dismissed a lawsuit that had temporarily blocked implementation. The penny-per-ounce tax applies to sugar and artificially sweetened beverages, including juice. The Illinois Policy Institute estimates that a 12-pack of 12-ounce cans of soda sold in Chicago will cost almost $6 in total.

The tax was passed in response to a worsening budget crisis, but regressive sweetened beverage taxes are not the right place to look for budget fixes. A much higher share of low-income households regularly drink soda, and a tax on sweetened beverages will impose a heavier burden on them.

The tax has been beset with design and implementation problems. A group sued the county because it claimed the tax violated the state constitution because the tax affected products in the same taxable class differently. While bottled beverages and fountain drinks are subject to the tax, on-demand drinks such as those mixed by a barista at Starbucks are not.

In addition, purchases made with Supplemental Nutrition Assistance Program benefits are also exempt from the tax. Some retailers have expressed concern that their point of sale systems may not be able to account for this. The tax will add another layer of compliance and regulatory burden for retailers.

Unlike some other taxes where the primary aim is to reduce sweetened beverage consumption, the Cook County tax is more focused on helping the county bring in more revenue. The county projected the tax would bring in $67.5 million in 2017 and more than $200 million in 2018. County officials announced layoffs for 300 workers due to the temporary delay in the law’s implementation, although it is uncertain that those layoffs will actually take effect.

Relying on revenue from the new tax reveals the inherent tension with these types of taxes. Proponents sometimes point to their success in reducing consumption of sweetened beverages. In other cases the primary aim of the tax is to raise revenue. If the tax reduces sweetened beverage consumption, associated revenues would also fall.

Trends in sweetened beverage consumption, independent of any response to taxes, make revenue projection more difficult. Per capita consumption of soft drinks has declined from a peak of 53 gallons in 1998 to less than 41 gallons in 2015.

According to the Centers for Disease Control and Prevention the share of high school students who drink soda and juice daily has plunged. In 2007 34 percent of high school students reported drinking soda daily, compared to 20 percent in 2015. Juice consumption saw similar trends. These reductions were widespread across ethnicities and school-level free/reduced price lunch eligibility. 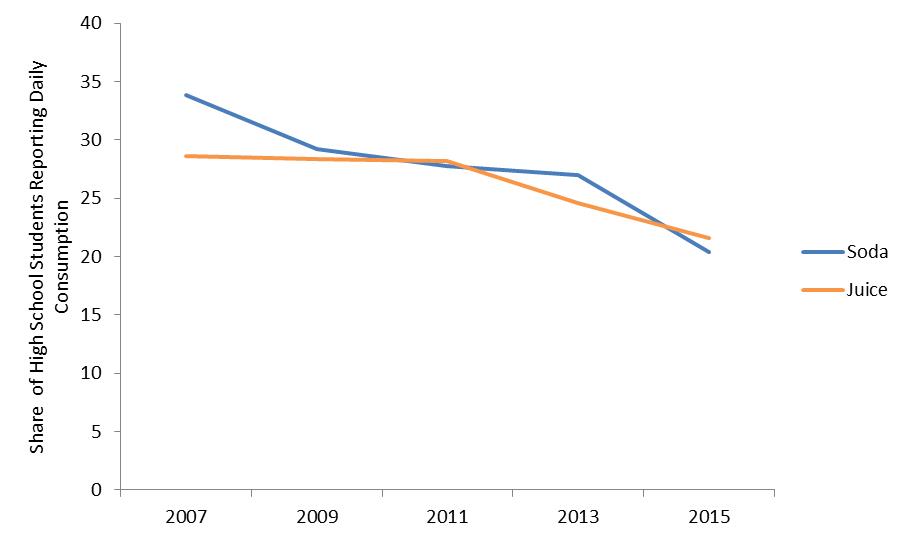 The fiscal outlook in Cook County may be bleak, but the soda tax is an ill-designed, ill-advised way to try to address budgetary shortfalls. The rollout of the tax has already been fraught with problems. Poorer households would be the hardest hit, and revenue generation will likely fall short of projections.

Charles Hughes is a policy analyst at the Manhattan Institute and author of the new report The Energy Bottleneck: Why America Needs More Pipelines. Follow him on twitter @CharlesHHughes.

6 Ideas Cities Can Use to Boost Their Economies