My colleagues and I recently analyzed every Federal Reserve interest rate increase episode between 1983 and 2015 and found several patterns emerge: bond yields rose, the yield curve flattened, the U.S. stock market either chopped sideways or rose, the U.S. dollar fell as frequently as it appreciated, and as the Fed raised rates from accommodative to a neutral monetary policy, the economy continued to grow, largely unaffected by the rate increases and removal of monetary accommodation. We also found that when the Fed tightened the money supply too much, the economic expansion tipped into recession.

Consistent with prior Fed rate tightening episodes, bond yields have risen and the yield curve has flattened; the economy has continued to grow—in fact, it has strengthened as the Fed raised rates on a quarterly basis and began to unwind its balance sheet; the U.S. stock market has risen significantly (the S&P 500 is up 42% since the Fed’s first rate increase; it has appreciated 30% since the Fed’s December 2016 rate increase); and the trade-weighted U.S. dollar has experienced wide swings and presently is modestly higher than when the Fed first raised rates.

Tables 1-4 summarize how the economy, interest rates, the stock market, and the U.S. dollar were affected by Fed rate increases 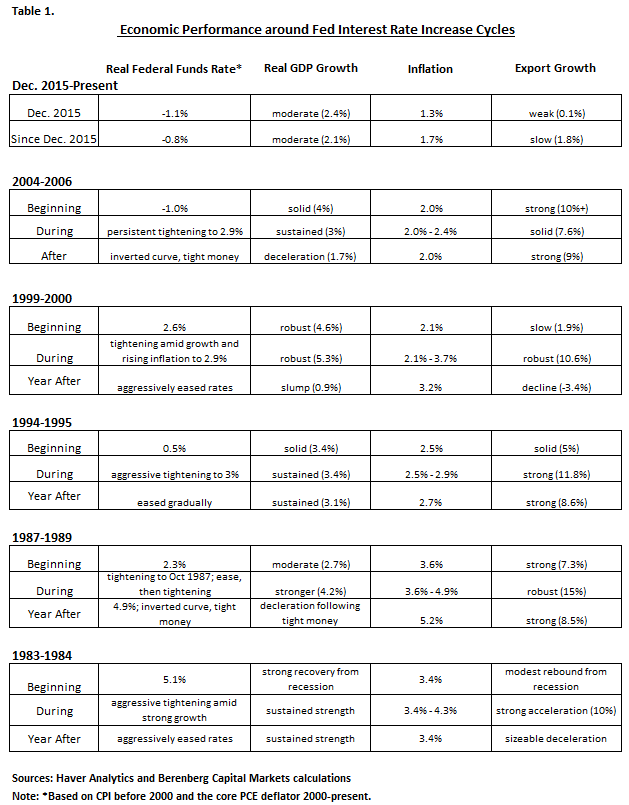 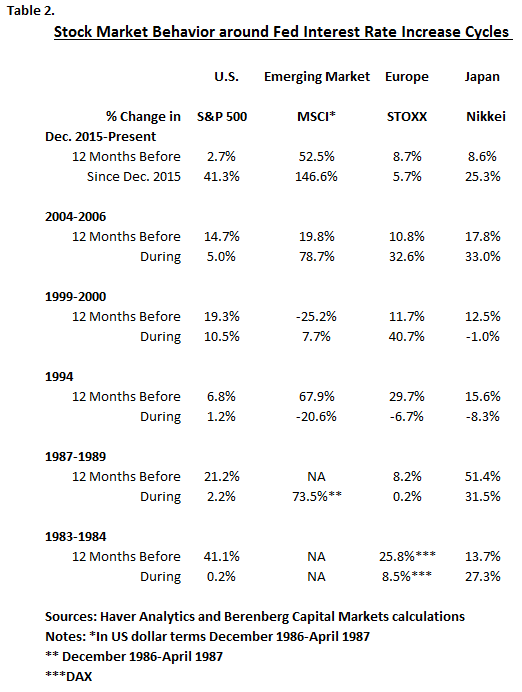 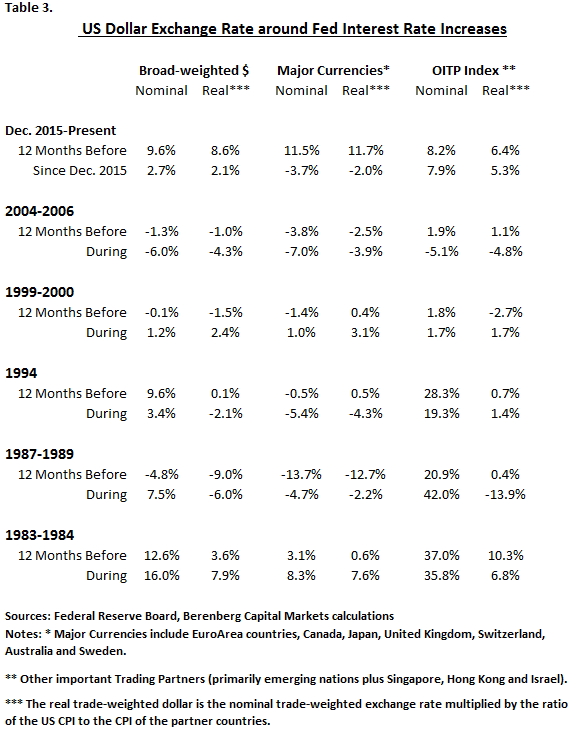 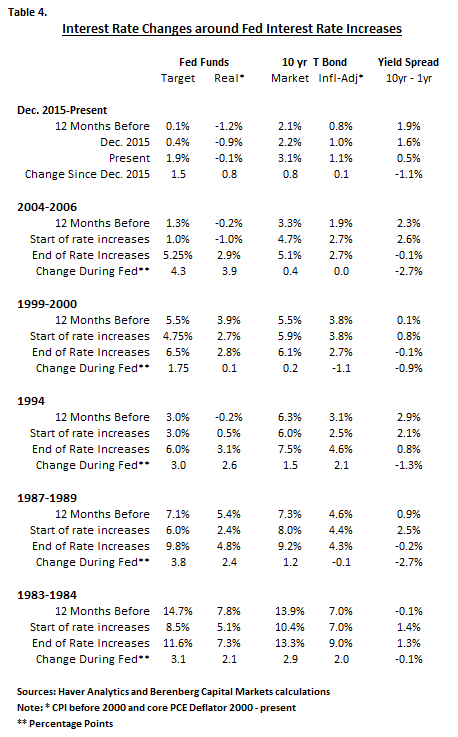 The continued growth and strengthening of the economy should come as no surprise. The rise in rates has been a reflection of the growth in real economic activity, and not a monetary tightening; in fact, monetary policy has remained accommodative. Moreover, the economy has clearly benefited from the easing of burdensome regulations that hampered business activity, investment, and bank lending—and from the Tax Cuts and Jobs Act that instituted corporate tax reforms and lowered tax rates for most households. Nor should the stock market appreciation have been a surprise: corporate profits have increased faster than GDP, bond yields have remained relatively low, and confidence in the economy has increased.

With the Fed soon expected to raise its federal funds rate target and signal that it may gradually raise rates further, some important, related questions arise: At what point will the Fed rate increases slow economic growth? Will the Fed raise rates above the natural rate?

The Fed’s assessment of the natural rate of interest is crucial to the upcoming conduct of monetary policy. This figure, the so-called r*, is the interest rate that takes hold when the economy is growing at its potential with inflation stable at 2% and unemployment at its natural rate. Importantly, as the Fed lowered its estimate of potential real GDP growth from 2.6% in 2010 to 1.9% presently, it lowered its estimate of the appropriate longer-run funds rate consistent with its 2% inflation target by even more, from 4.25% in 2012, to 2.9%, which adjusted for inflation is 0.9% (Chart 1).

These FOMC estimates have been guided by more rigorous analysis led by John Williams, President of the Federal Reserve Bank of New York, and his colleagues. Their downward revisions to estimates of the natural rate of interest during much of the expansion have been driven by disappointing growth in capital spending, weak productivity, and diminished estimates of potential growth. In practice, the fact that the economy did not respond positively to the Fed’s artificially low policy rates and its massive asset purchases reinforced the belief that the natural rate of interest had fallen. 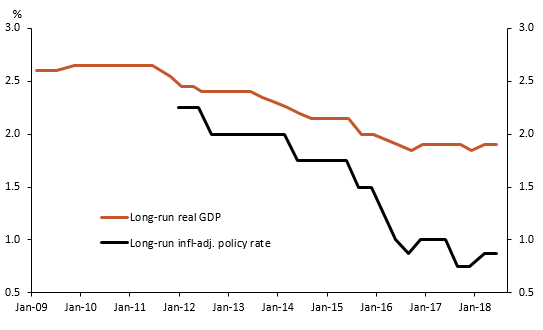 But the strengthening of economic performance may be changing the Fed’s attitudes about the natural rate of interest as well as the key variables used to estimate it. Real GDP growth has strengthened and remained well above the Fed’s estimate of potential growth, driven in part by an acceleration in capital spending, even as the Fed has been raising rates and unwinding its balance sheet. While measured labor productivity has tilted up in the last year, the growth in the labor force (and steady labor force participation rate) is exceeding the Fed’s assumptions. Moreover, the unemployment rate has remained substantially below the Fed’s estimate of the natural rate of unemployment (known as full employment), and wage gains have been lower than the Fed’s forecasts. These factors, along with the friendlier business climate occasioned by deregulation and lower taxes, lead us to believe that potential growth is higher than the Fed currently estimates

The Fed acknowledges the strengthening of the economy. Chairman Powell, in his first testimony to Congress in February of 2018, sensed the change, stating that “some of the headwinds the U.S. economy faced in previous years have turned into tailwinds.”

Although the Fed has been revising up its real GDP forecasts—to 2.8% from 2.1% for 2018, and 2.4% for 2019—it has maintained its subdued 1.8% median estimate of longer-run potential growth. Historically, the Fed’s economic projections have lagged behind reality, though it may nudge up its 2019 forecast to acknowledge the momentum in the economy.

If the Fed raises its estimate of potential real growth, then it would be expected to lower its estimate of the natural rate of unemployment toward 4% and nudge up its estimate of r*. This would imply that a higher neutral policy rate would be consistent with sustained growth, suggesting further increases in the Fed’s target rate would be appropriate. The Fed most likely will continue with its gradual rate hikes and unwinding of its balance sheet amid current strong growth and inflation close to its 2% target.

Inflation—and of equal importance, inflationary expectations—remain critical to the Fed’s interest rate policy. Inflation has risen in the last year, but in recent months it has stalled. If inflation stays very close to 2% and if inflationary expectations—as reflected in the array of market and survey based measures the Fed monitors—remain well anchored, the Fed will slow its rate increases once it gets its funds rate target close to 3%. If inflation does tilt up and moves decidedly above 2%, the Fed will be required to raise rates beyond its estimate of (inflation-adjusted) r*.

Our baseline forecast is that the Fed will raise rates in September and December, three times in 2019, and modestly in 2020. The “new normal” may be different than what it used to be, but most likely not by as much as many perceive.