The End of Cities?

No one knows what the long-term impacts of the coronavirus will be for cities. The present situation surely reminds us that alongside density’s many advantages are demons to tame, among them the spread of deadly disease. But even before COVID-19, cities were losing people. The latest Census estimates reveal that New York City lost more than 53,000 residents last year—146 people a day—continuing its three-year streak in population decline. The nation’s largest city also saw the country’s biggest population losses due to steep declines in international immigration along with ongoing domestic outmigration. And with the coronavirus pandemic sweeping through New York City, this decline may get steeper still. 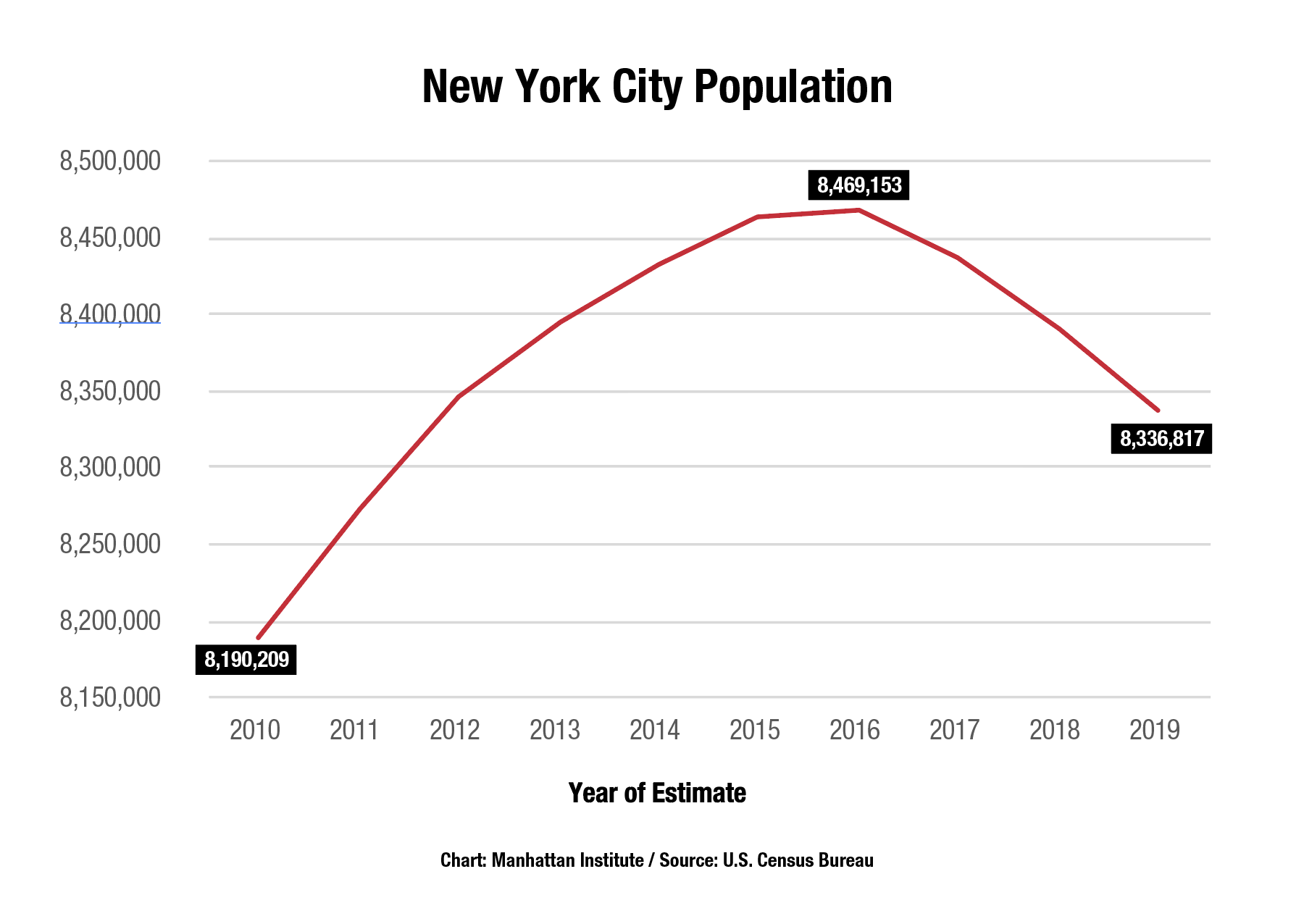 International immigration into New York City has fallen by 46% since its peak in 2016. These newcomers over the past decade have compensated for the nearly 900,000 residents who have left in that time. Even with its recent losses, New York City’s population of 8,336,817 remains 2% larger now than it was in 2010, with Manhattan having enjoyed the largest gains (2.7%), and Queens, the smallest (1%). However, although the city continues to enjoy more births than deaths, its population is aging.

Throughout much of the 2000s and into the 2010s, America’s major cities, including New York, reversed prior decades of population loss as incomes grew and crime fell. Some neighborhoods even surpassed their historic peak population, like New York’s Bronx borough, which lost some 20% of its residents in the 1970s alone. Newcomers rented out or bought up real estate in the wake of the 2008 financial crisis as urban job creation revved up. But over the past decade housing, creation failed to keep up with job creation: 3.9 new jobs were created in New York City for every one new housing permit.

America’s period of urban growth appears to be over. Nowhere is this more evident than in New York City, where greater demand for urban living paired with a constrained supply in housing, creating a rising cost of living that has dampened down growth. Today, roughly a third of all renter households pay more than 50% of income in rent. Housing costs are a key determinant of migration decisions, and evidence is emerging across America’s major cities that costly shelter in particular is driving low-skilled workers to move away or not move there in the first place. Combined with the ineffectual transportation and high rates of taxation found in cities like New York today, many Americans are finding they are better off elsewhere.

Some caveats are in order: New York City’s own administrative data suggests rising employment, housing growth, and school enrollment consistent with a growing population. The US Census Bureau has also suffered from budget cuts and lack of compliance. And now, with the Bureau suspending field operations less than a week before launching the 2020 Census, it is reasonable to question just how reliable this data might be.

Nevertheless, data showing a decline in population growth from dropping birth rates, rising deaths, and slowing immigration are consistent across America. The same is true for declines in urban population growth across the country’s older legacy cities, and even more so in more expensive coastal hubs. Rising rents suggest there is still demand for New York housing, but underling the higher prices, many cities are stagnating.

For New York City, it is not hard to foresee its future post-coronavirus: continued domestic outmigration in the face of rising health risks and taxpayer burdens, compounded by drastically lower international immigration due to increasing border controls and decreasing job opportunities. While immigration policy is federal, other determinants of New York City’s ability to grow are not—housing, transportation, and education are still primarily local concerns. Decline by these measures is likelier to harm the most vulnerable New Yorkers.

A thriving New York City depends on more New Yorkers—and more houses, more jobs, and more mobility for those residents. The city should not take yesterday’s growth for granted. High housing costs are suffocating and shrinking America’s largest, most prosperous cities—in New York City, most of all. As it stands, a Smaller Apple will be less able to afford the fiscal pain of a post-coronavirus world.

It’s easy to settle for stagnation, but New York should choose growth.

Michael Hendrixis director of state and local policy at the Manhattan Institute.