The Social Security trustees issued their annual report on the program’s financial condition earlier this year, along with their companion report on Medicare. As in previous years, these reports contain sobering news that lawmakers and the public need to know. The trustees who authored these reports are Treasury Secretary Steven Mnuchin, Health and Human Services Secretary Alex Azar, Labor Secretary Alexander Acosta, and then-acting Social Security Commissioner Nancy Berryhill. Two other trustee positions, those of the independent, bipartisan public trustees, have remained vacant since Robert Reischauer and I last served in those capacities in 2015. This article summarizes four key lessons of the Social Security report.

#1: Social Security faces a huge financing shortfall. Social Security is designed to pay old-age, survivors and disability benefits from special trust funds financed by worker payroll tax contributions, interest earnings on those contributions, and (to a lesser extent) the taxation of benefits. By law, Social Security cannot pay benefits exceeding the resources credited to these trust funds, meaning that if they become depleted, benefit payments must be delayed and effectively reduced. Unfortunately, this is exactly what would happen under current law, because scheduled benefits far surpass the revenues the trust funds are projected to receive. (See Figure 1, reproduced directly from the trustees’ report.)

Figure 1: Social Security Income, Cost and Expenditures as a % of Workers’ Taxable Earnings 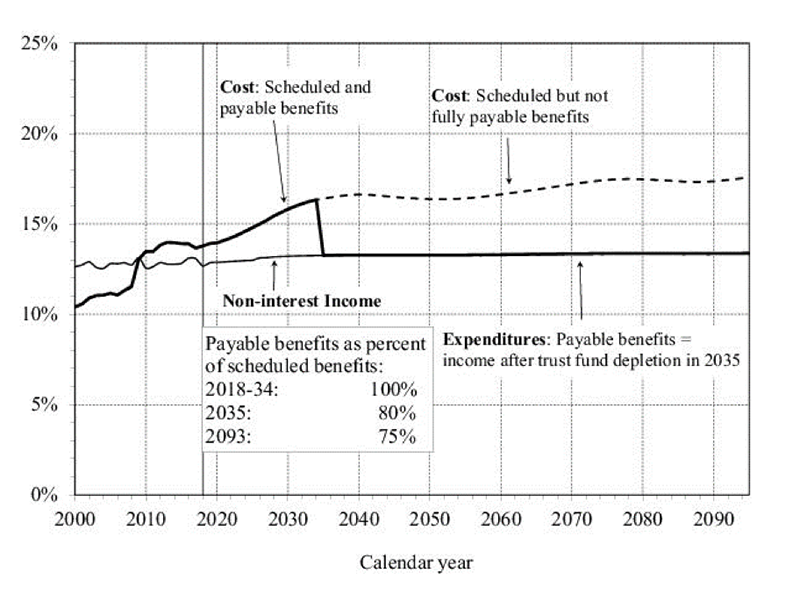 There are a number of ways to quantify Social Security’s financial shortfall, and all of them are sobering. In present-value terms, the trustees measure the financing gap at $13.9 trillion over the next 75 years, or $43.2 trillion over all time. Such enormous numbers over vast time spans may not carry much meaning to general readers. Perhaps a more tangible way to think of it is that roughly 17 % of scheduled benefits over the next 75 years are unfinanced, or that the Social Security payroll tax would need to be raised immediately from 12.4% to 15.1% (a 22% increase) to stave off trust fund depletion for that long.

Another useful basis for comparison is the 1983 Social Security amendments, enacted in a crisis atmosphere to head off an insolvency that was literally just months away, threatening an immediate interruption of benefit payments. Those reforms were difficult to negotiate and intensely controversial. They included a six-month cost-of-living adjustment delay; taxing benefits for the first time; bringing federal employees (and their newly-assessed payroll taxes) into the program; gradually raising the full retirement age by two years; and accelerating a previously enacted payroll tax increase. The top elected leaders of the time on both sides of the aisle—President Ronald Reagan, House Speaker Tip O’Neill, Senators Bob Dole and Pat Moynihan, and others—had to join hands and withstand strong opposition from lobbying interests such as AARP to pass the reforms. And yet, closing today’s shortfall would require far more severe measures than those, even relative to today’s larger economy and tax base. (See Figure 2.)

#2: The shortfall is certain. For many years, those who felt an interest in delaying action to avert Social Security’s insolvency promoted a myth that much of the projected shortfall might go away by itself, depicting it as a byproduct of overly pessimistic assumptions. There was never a plausible basis for this myth but in any case, so much time has since passed that there is now very little remaining uncertainty in the qualitative outlook. The trustees’ stochastic analysis shows only a 10% chance that insolvency might be delayed even six years relative to projections under current law, only a 2.5% chance of its being delayed ten years, and no plausible chance of it being averted altogether. Further procrastination offers no realistic hope of avoiding the problem; it just renders it more difficult to solve.

#3: We are running out of time to save Social Security, if we haven’t already. For years I have been asked how much more time we have to save Social Security. For years, I have replied that the window of opportunity is already closing, and that while one can’t know precisely when it closes altogether, it is closing fast. My updated and blunter appraisal is that it might be too late already. Clearly, it becomes too late well before Social Security’s trust funds run out. Historically, Congress has been unwilling to cut benefits for those already receiving them, insisting instead on phasing in changes gradually, so as to affect only future beneficiaries. That’s no longer possible well before Social Security’s combined trust funds are projected to go under in 2034. By then, even completely cutting off all new benefit claims, for the poorest beneficiaries as well as the wealthiest, would not avert trust-fund depletion.

Some have advocated that Social Security’s shortfall be downplayed and action delayed as long as possible. They do so with the aim of having more of an eventual solution occur on the tax side, and less on the benefit side, than the public would knowingly support with advance notice. The tactical assessment is that once it’s extremely late in the game, prospective benefit reductions will accomplish very little, while lawmakers will be unwilling to cut then-current benefits, so they’ll have to raise taxes instead. The problem with this tactic (apart from its cynicism) is that the delay game has already been pushed too far. There have been no financing corrections for over three decades, when there was still time for tax increases alone to work. Already today, payroll taxes would have to increase 22% to fix the problem without also moderating benefit growth, a tax increase far larger than lawmakers would likely ever seriously consider. Moreover, raising the cap on wages subject to the Social Security tax—the favorite option of the political left—no longer works: even completely eliminating the cap and exposing all earnings to taxation wouldn’t eradicate even half of Social Security’s permanent deficit.

As Social Security’s insolvency date approaches, not only benefit growth restraints but payroll tax increases can’t practicably get the job done. And once lawmakers prove unable or unwilling to balance Social Security’s benefit promises with its payroll tax intake, then its historical financing structure must be abandoned, most likely replaced by one in which the program is financed at least in part from general federal revenues. When that occurs, the foundational principle of Social Security as an “earned benefit” will be destroyed, and its longstanding political protections gone with it, as voters begin to perceive it as just another welfare program funded by the income taxes that only about half of Americans pay. Historically, programs funded from the federal government’s general revenues, unlike Social Security, have been subject to more frequently recurring changes in eligibility rules, means tests, and restraints on benefit growth, as they must compete with other programs for federal funds.

The irony of this outcome is that it would be brought about by the delay tactics of many who genuinely believed they were protecting Social Security, by shielding it from any deceleration of its scheduled benefit growth rate. Yet by ending Social Security’s longstanding self-financed, earned-benefit structure, much of the program’s unique political strength and stability, which the political left cares about at least as much as the political right does, would be destroyed. This unintended outcome also becomes more likely as many lawmakers embrace proposals to increase Social Security benefits across the board, which would worsen the program’s distributional inequities and make it far harder to close the shortfall. The only way the crisis can be averted is if lawmakers from both sides of the aisle come soon to the bargaining table with a willingness to negotiate a combination of revenue increases and benefit growth restraints that put Social Security on sound financial footing.

#4: We need public trustees. Since Robert Reischauer and I last served, the public trustee positions have remained vacant. This has deprived the trustees’ reports of critical bipartisan, independent oversight necessary to safeguard public confidence in the information they contain. Just as importantly, it has deprived lawmakers and the public of frank, bipartisan appraisals of Social Security’s financial realities, of the kind the public trustees had long provided, independent of the ex officio trustees who simultaneously serve in the president’s cabinet.

Until the last few years, members of Congress had remained consistently committed to ensuring the flow of objective analytical information from the public trustees, even as they may have disagreed with one another on optimal policy solutions. This commitment even extended to the Senate convening on a weekend just before the 2000 presidential election, to ensure public trustees were confirmed and safely in place. Congress wouldn’t dismiss the head of the Congressional Budget Office simply because some members sought to run larger budget deficits. Nor should the public trustee positions go vacant, even if their descriptions of sobering financial realities run afoul of some legislators’ political positioning on Social Security. The presidential administration and the Senate should commit to nominating and confirming public trustees for both Social Security and Medicare, irrespective of whether the financial realities they present are politically convenient for those who hold and aspire to elective office.