My last article reviewed key lessons from the Social Security trustees’ annual report on that program’s financial status. This article presents four key lessons of the trustees’ companion report on the Medicare program.

#1: Although Social Security’s actuarial shortfall is larger, the threat of insolvency is more immediate in the Medicare Hospital Insurance (HI) Trust Fund, which in addition to being sooner is also drawing closer. Figure II.E1 from the Medicare trustees’ report, reproduced below, shows that under current projections the Medicare HI trust fund would be depleted in 2026, just seven years from now. By law, Medicare HI (like Social Security) cannot make benefit payments exceeding the assets credited to its trust fund, which means that if the trust fund runs out, payments will be interrupted and effectively reduced. By 2026, Medicare HI will only have revenues sufficient to make 89% of scheduled benefit payments, a percentage projected to decline to 77% in 2046. 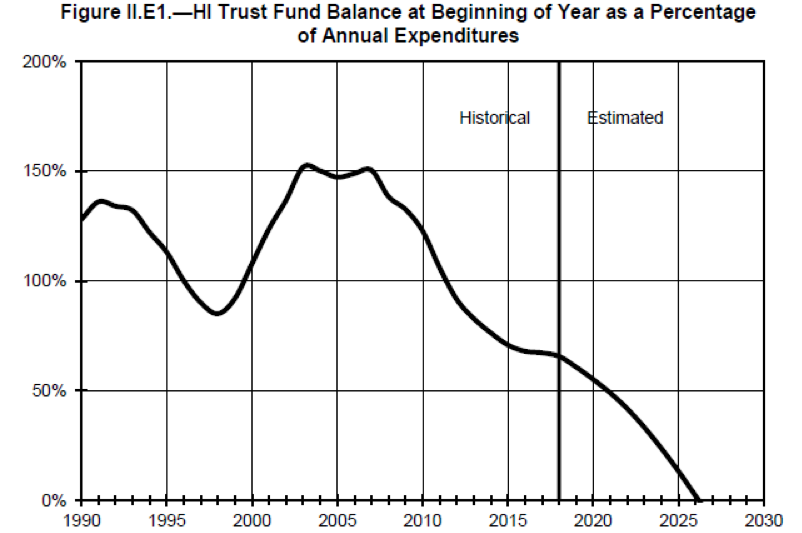 The preceding figure is worth a closer look, to glean how thin the resources of Medicare’s HI fund have already become. At the start of 2019, the HI trust fund only contained enough assets to fund 61% of one year’s benefit payments. This means that in the (hypothetical) absence of incoming tax revenues, the fund would only last for about seven months. This is an extremely small balance, as the trustees explain: “The HI fund again fails the test of short-range financial adequacy, as its trust fund ratio is already below 100 percent of annual costs, and is expected to decline continuously until reserve depletion in 2026.”

The impending insolvency of the Medicare HI trust fund means that lawmakers must enact additional cost-saving measures. It goes without saying that nothing should be done to worsen Medicare’s financial shortfall. Controversial though the Affordable Care Act (ACA)’s annual provider payment restraints are, Medicare HI’s shortfall would be substantially increased if they were overridden. Similarly, the ACA’s unpopular “Cadillac tax” on high-cost insurance plans, already postponed several times, should not be further postponed or repealed unless lawmakers enact new limits on the tax subsidy for employer-sponsored health insurance (ESI). Otherwise, the ESI tax preference is expected to drive additional health cost inflation, further increasing Medicare costs and weakening program finances.

Medicare HI’s outlook is not only troubling on its face, but is somewhat worse than projected in last year’s report due to tax revenues being lower than expected, program spending being higher, and smaller productivity growth in evidence, which in turn reduces the savings projected from the ACA’s cost containment provisions.

#2: The HI trust fund embodies less than half of Medicare; financial strains in the larger part of the program are manifested not in projected insolvency but in runaway cost growth. Medicare has two trust funds. In addition to its HI trust fund, there is the Supplementary Medical Insurance (SMI) trust fund, which pays for physician services, prescription drug benefits, and other Medicare benefits not covered by HI. The SMI trust fund functions differently from either of Social Security’s trust funds, as well as from HI. SMI isn’t funded by a payroll tax; instead, roughly three-quarters of SMI expenditures are funded by general federal revenues, the other quarter by premiums paid by or on behalf of beneficiaries. Importantly, SMI is automatically given whatever funds it needs each year by law, and thus can never become insolvent.

The fact that there is no SMI insolvency projection does not mean that SMI suffers no financing strains. It surely does suffer strains, but they are manifested in a different way—specifically, in rising federal budget and premium costs. For all the financial challenges facing Medicare HI, SMI’s costs are actually rising even faster—indeed, much faster than our economic capacity. This can be readily seen in Figure II.F1 from the trustees’ report, reproduced below. 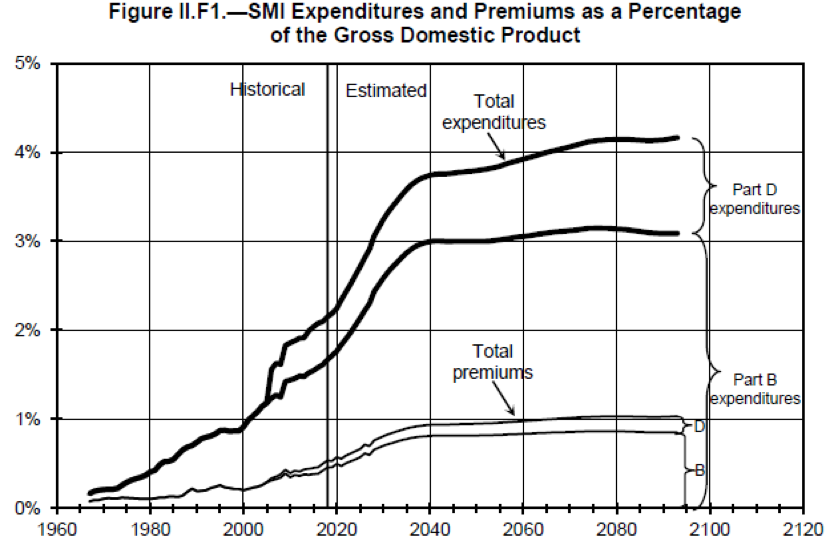 The combination of SMI and HI cost growth means that Medicare costs as a whole are rising much faster than our national economic output. This means in turn that the Medicare financing challenge will worsen and/or recur until lawmakers succeed in slowing cost growth to sustainable rates. The next graph, Chart C reproduced from the trustees’ report summary, illustrates historical and projected Medicare cost growth. It also shows how the Medicare HI shortfall (labeled “Deficit” on the graph) is but one small part of the larger Medicare financing challenge.

Chart C: Medicare Cost/Income by Source as a % of GDP 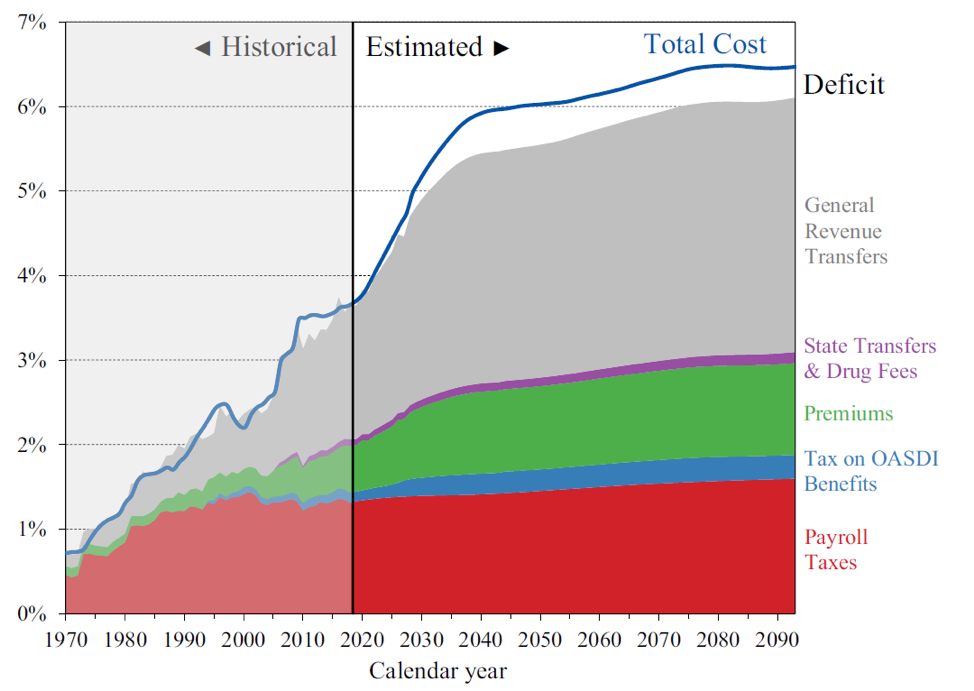 #3: Proposals to expand Medicare, especially to offer “Medicare for All,” are premature at best. The trustees’ report documents that federal lawmakers have yet to meet the challenge of adequately financing our current Medicare commitments, despite years of warnings. The Congressional Budget Office documents that the critical condition of federal finances is driven, more than anything else, by lawmakers’ failure to contain the growth of federal health program costs. Until that problem is resolved, it is impractical to consider proposals to provide “Medicare for All” or even to permit additional Americans to buy into Medicare on a voluntary basis. Only after we figure out how to finance the Medicare program we have, can we seriously consider expanding that program.

#4: We need public trustees. This last lesson was also a take-away from the Social Security report but it applies equally strongly to Medicare. Medicare’s financial projections, no less than Social Security’s, warrant the independent, bipartisan oversight the public trustees historically provided up through 2015, when the Senate allowed the service of Robert Reischauer and myself to terminate without replacements at the ready. This lapse has interrupted, and one hopes has not ended, the vital public education work performed by several public trustees, who for more than three decades had operated as a unified bipartisan voice for analytical integrity.

It is possible it is mere happenstance that the dismissal of the public trustee watchdogs from the process has coincided with the proliferation of proposals to expand both Social Security and Medicare far beyond what fiscal realism would allow. Nevertheless, the public policy discussion would benefit enormously from confirming public trustees to represent the bipartisan analytical consensus regarding Medicare (and Social Security) finances. Medicare policy, like Social Security policy, is too important to be debated without a firm grounding in analytical realities.