The Fed Should Focus on Inflation, Not Tariffs

As expected, the Federal Reserve lowered interest rates again last week. The Federal Open Market Committee’s target for the federal-funds rate now stands one half percentage point below its peak from last December. Where interest rates will go next, however, is not so clear.

The press release accompanying the Sept. 18 policy announcement indicated that three out of ten voting members of the FOMC registered dissenting opinions. One—James Bullard of the St. Louis Bank—preferred a larger rate cut. But two others—Esther George from Kansas City and Eric Rosengren from Boston—favored no change in rates at all.

Quarterly projections released after the meeting show that these same divisions run more widely through the Committee as a whole, including nonvoting as well as voting members. Figure 2 from that document shows that seven of the 17 Committee members believe that another rate cut will be appropriate before the end of 2019. Five others expect to hold rates where they are now, but the remaining five would prefer to undo the latest rate cut by year’s end.

What should the Fed do next? At his post-meeting press conference, Federal Reserve Chairman Jerome Powell described the latest rate cut as a reaction to two factors: uncertainty over trade policy and continued sluggishness in inflation. Both theory and historical experience show, however, that there is little the Fed can or should do to offset the negative effects that tariffs have on the economy. In judging where interest rates should go from here, FOMC members should focus instead on the likely path for inflation.

In theory, one way to discern the appropriate response of monetary policy to changes in tariffs is by reference to the Fed’s “dual mandate” for unemployment and inflation. The source of this dual mandate is the Federal Reserve Reform Act of 1977, which instructs the FOMC to “maintain long run growth of the monetary and credit aggregates commensurate with the economy’s long run potential to increase production, so as to promote effectively the goals of maximum employment, stable prices, and moderate long-term interest rates.”

Recent surveys show that business confidence has been shaken by uncertainty over U.S. trade policy. Recent data confirm that growth in business spending has slowed considerably as a result. The problem is that, if sustained, this weakness in capital spending will reduce the U.S. economy’s long-run productive capacity. The language of the 1977 Act recognizes correctly that this is not the kind of problem that Fed policy can effectively address.

And while coping with uncertainty over trade policy appears as a new challenge for the Fed, historical experience provides other relevant examples of what goes wrong when monetary policymakers attempt to achieve more than they possibly can. Throughout the 1970s, repeated, sharp increases in the price of imported oil worked, similarly, to reduce the economy’s productive capacity. Back then, Federal Reserve officials tried to cushion output and employment from the negative effects of those oil price shocks by holding interest rates too low for too long. The result was the worst of both worlds: slower growth with higher inflation.

As hard as it may be, Chairman Powell and his colleagues on the FOMC need to do a better job of making clear to politicians and the public that the law, economic theory, and historical experience all warn that it would be a serious mistake for the Fed to try to offset the effects of tariffs. Higher tariffs may be necessary to secure more favorable trade agreements with China and other countries around the world. But there’s nothing the Fed can do to minimize their costs.

By contrast, as our nation’s central bank, the Fed is solely responsible for controlling inflation. Last year, the Fed was raising rates because inflation appeared to be rising back towards its long-run 2% target. This year, falling inflation provides ample justification for the Fed to lower rates instead.

Today, as always, the Fed’s task of controlling inflation is complicated by the fact that monetary policy affects the economy with what Milton Friedman famously called “long and variable lags.” In deciding whether interest rates should rise or fall over the remainder of 2019, therefore, FOMC members face the difficult task of predicting whether or not the two rate cuts already in place will suffice to finally bring inflation back to target.

As Chairman Powell emphasized at his press conference, the FOMC monitors a wide range of data in an effort to forecast inflation. Ironically, in light of the central role played by money growth in generating inflation—a role that the 1977 Act recognizes explicitly—Federal Reserve officials rarely if ever discuss monetary trends in their statements. But it would be instructive for them to do so.

The figure below plots the growth rate of the Divisia M2 measure of the money supply over the period since 2014. M2 includes cash and checking deposits, as well as assets easily converted into cash such as short-term money market instruments and various time deposits. The figure shows, quite clearly, how money growth declined throughout 2017 and 2018, when the Fed was raising its federal-funds rate target most aggressively. Toward the end of last year, in fact, the rate of money growth had fallen below 3%, consistent with the view, which the Committee has now accepted, that monetary policy had become too tight. 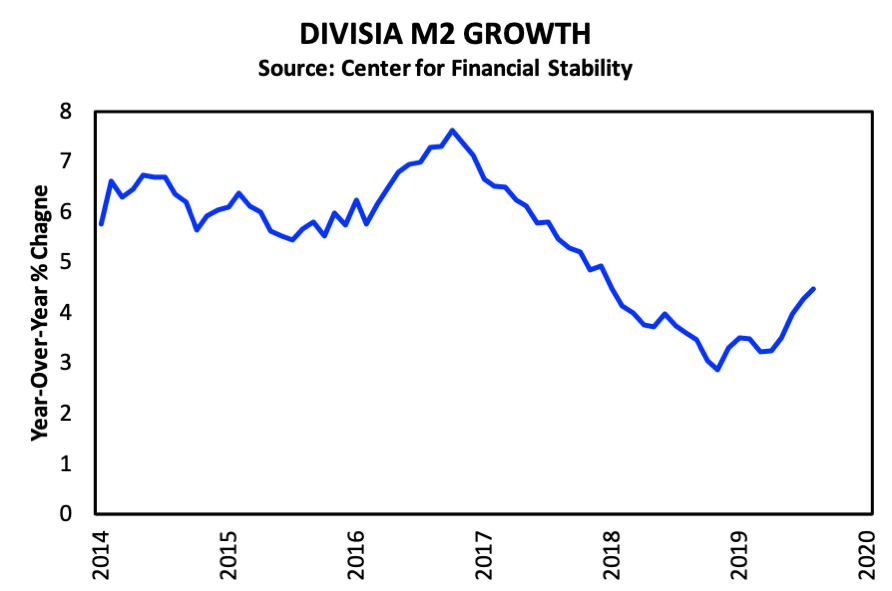 Money growth has rebounded in 2019, however, as the Fed has reversed its course with interest rates. Presently, M2 growth is running at an annual rate of 4.5%. If sustained, this healthier rate of monetary expansion will be consistent with 2.5% growth in real GDP—somewhat faster than experienced so far this year—together with a return of inflation to its 2% target.

Thus, Fed policy appears to be well-calibrated now, fully consistent with the dual mandate. The group of FOMC members who see interest rates holding steady for the rest of the year will most likely be right. But, in gauging whatever monetary policy actions are needed in the future, the Fed should focus on inflation, not tariffs.