The Federal Reserve’s Federal Open Market Committee (FOMC) left interest rates unchanged at its meeting last month. However, the Committee statement released after the meeting effectively cancelled the series of future interest rate increases the FOMC had previously planned for 2019. The question is—why did the FOMC see the need for this policy change? Recent declines in inflation may explain part of the shift. But the likelier reason is the performance of the stock market—which is cause for concern.

As noted in my previous essay for E21, the FOMC entered the New Year with plans to raise interest rates. The statement that followed the December 2018 meeting made specific reference to those plans, noting that “the Committee judges that some further gradual increases in the … federal funds rate will be consistent with sustained expansion of economic activity, strong labor market conditions, and inflation near the Committee’s symmetric 2 percent objective over the medium term.” The January statement replaced this phrase with something very different, explaining that “in light of global economic and financial developments and muted inflation pressures, the Committee will be patient as it determines what future adjustments to the … federal funds rate may be appropriate to support these outcomes.”

Since the FOMC’s statements are always carefully worded, the new language strongly implies that further interest rate increases may no longer be needed and that, to the contrary, the Fed’s next move might well be to lower interest rates. Seeking to confirm this at the press conference following the January FOMC meeting, Richard Miller of Bloomberg News asked Fed Chair Jerome Powell if the new statement was “meant to imply the next move is as … likely to be up as down?” Chair Powell’s response was a simple and direct “yeah.”

The FOMC often seeks to adjust the thrust of its monetary policy by shifting expectations of future interest rates. This was the conclusion of an important paper published in 2005 by economists Refet Gürkaynak, Brian Sack, and Eric Swanson. Using data from January 1990 through December 2004, the authors found that the FOMC worked through two distinct channels—either it announced changes to the “current federal funds rate target” or it changed expectations for the “future path of policy.” Thus, it seems clear that by making an important change to its policy statement—through removing reference to future interest rate increases—the FOMC intended at its January meeting to make monetary policy more supportive of economic growth.

But why did the FOMC see the need for this more accommodative policy? One answer is given quite directly in the January statement, with its reference to “muted inflation pressures.” The Fed’s preferred measure of inflation, based on annual percentage changes in the price index for personal consumption expenditures, excluding food and energy, had briefly returned to the Fed’s 2 percent target last summer, after running below target for many years before. But in October and November 2018, the inflation rate slightly dipped to 1.8 and 1.9 percent. That drop may be why the FOMC postponed its plans for further rate hikes. At the same time, though, the decline in inflation seems too small to justify abandoning those plans so completely.

The FOMC’s January statement also makes reference to recent “financial developments.” Stock prices fell quite sharply after the FOMC’s previous meeting in December. The Standard & Poor’s 500 stock index declined by more than 7.5 percent between December 18 (the day before the FOMC meeting) and December 24. It seems likely that this is what drove the FOMC’s decision to change its interest rate plans.

There is, again, precedent for this. Another important paper, by economists Anna Cieslak and Annette Vissing-Jorgensen, shows that since the mid-1990s, the FOMC has consistently adopted more accommodative policies following declines in stock prices. In their paper, Cieslak and Vissing-Jorgensen carefully analyze FOMC minutes and transcripts to explain why the FOMC behaves this way. They conclude that FOMC members are not concerned with stock price movements themselves; instead, they are concerned with the macroeconomic effects of falling stock prices. When stock prices decline, households become less wealthy and cut back on their spending. Likewise, when the market falls, corporations planning to issue new shares raise less money, and must therefore cut back on their investment plans.

Thus, FOMC members likely changed their plans for future rate hikes because they were concerned about the effects falling stock prices would have on consumer and business confidence and, therefore, spending and economic growth.

Cieslak and Vissing-Jorgensen present another finding, however, that raises a potential concern with the FOMC’s response to stock prices. Specifically, they discover that while the FOMC often makes its policy more accommodative after the stock market declines, it does not respond symmetrically by making its policy more restrictive when the stock market rises. This raises the concern that, deliberately or not, the Fed is giving investors a free “put”—that is, a way to cut their losses when stock prices fall without having to sacrifice any gains when stock prices rise.

It can be difficult for policymakers to stand by and watch the price of shares, or any other financial asset, fall suddenly in the free market, especially when it seems like their policies were the cause. But this is something that FOMC members may have to force themselves to do sooner or later. If they continue to respond asymmetrically to falling but not rising stock prices, they will encourage the same kind of excessive risk-taking that fueled the housing market bubble in the years leading up to the financial crisis of 2007-2009. Surely, this is something to be avoided.

Peter Ireland is a professor of economics at Boston College and a member of the Shadow Open Market Committee, an independent group of economists organized with the help of Economics21 and the Manhattan Institute to comment on Federal Reserve and its policies. 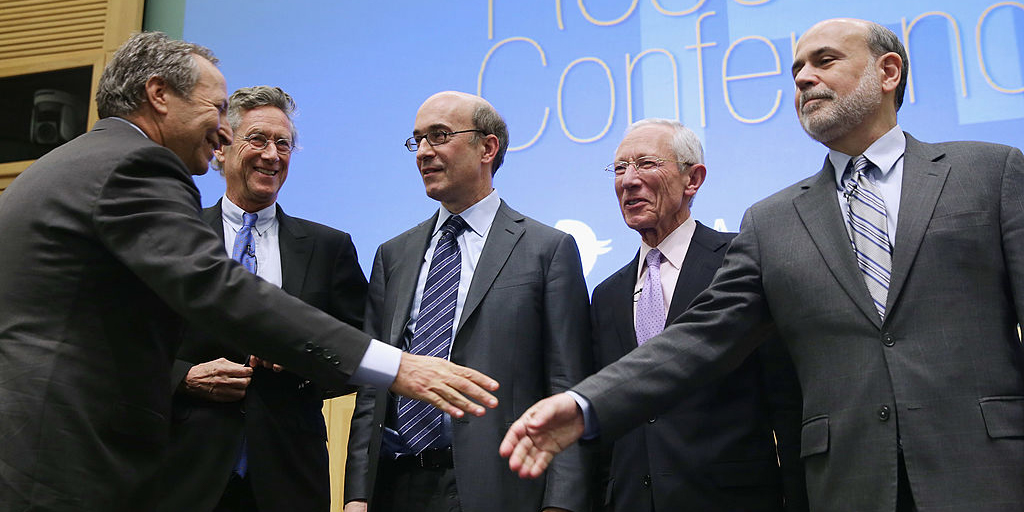