In an emergency conference call Tuesday, the Fed cut its Federal funds rate target by 50bp to 1%-1.25%, two weeks before its scheduled March 17-18 FOMC meeting. There were no dissents. The fears and unknowns about the coronavirus and its economic impacts have put the Fed in a very difficult situation. It acted decisively, taking what it perceives to be a cautionary step. Whether it proves to be effective or wise is yet to be determined.

The Fed’s emergency easing followed an announcement from the G7 finance ministers and central bank governors that they were closely monitoring conditions.

Why they did it

The Fed sees the virus as posing significant downside risks to the economy. (Fed chair Powell: “the Committee judged that the risks to the U.S. outlook have changed materially.”) The decline in inflationary expectations and an expected decline in headline inflation further below the Fed’s 2% target provides the Fed with the perceived flexibility to engage in easing while staying faithful to its dual mandate. While there is scant hard data indicating economic harm at this point, Powell stated that they “are seeing effects on tourism and travel industries and hearing concerns from industries that rely on global supply chains.”

However, the virus has triggered a real negative shock to global aggregate demand and supply that cannot be fixed through normal monetary easing, especially when monetary policy and financial conditions are already easy. There are already more-than-ample bank reserves and the lowest bond yields in history. Easing will not stimulate consumption and investment.

The Fed understands this. It also knows that while the coronavirus is unique and scary, it will be a temporary phenomenon, and eventually the economy will return to its projected growth path. Of course, nobody knows how long “temporary” is, so the Fed cut rates in order to lift confidence—in both financial markets and the broader public—and to ease the intense risk aversion and dampen the volatility that has gripped financial markets in recent days.

It is uncertain whether this emergency, inter-meeting rate cut will effectively serve the purpose of lifting confidence. It may be successful; on the other hand, it may not, particularly if there is any further negative real news on the spreading of the coronavirus and associated disruptions. Initial market responses to the Fed’s cuts have not been positive.  Let’s be realistic:  fears and uncertainties about the coronavirus will lift when there is convincing positive real news that its spread is ebbing. The Fed’s monetary easing does not change that reality.

Chairman Powell was asked in his press conference whether the Fed would raise rates if the damage to the economy turns out to be less severe than expected. His response was that “if we get to a place where it is an appropriate time to change the stance [on monetary policy], we won’t hesitate to do that.” We give credit to the Fed for its transparency, but remain concerned that it has a very unhealthy relationship with financial markets and worry that the recent emergency cut may reinforce that  (markets always crave monetary easing, and the Fed usually accommodates). We also worry that after the fears about the virus pass, the Fed will not reverse the cuts.

At the Fed’s strategy conference in June 2019, when the Fed funds rate was 2.25%-2.5%, Powell stated that the biggest challenge facing the Fed is the effective (zero) lower bound and that negative policy rates were not an attractive option. The Fed immediately commenced implementation of three 25-basis-point “insurance rate cuts” in response to trade policy and international uncertainties, lowering the policy rate to 1.5%-1.75%. This indicated that the Fed was willing to ease policy even though there were no signs of recession. When it was clear that the uncertainties had dissipated and the economy continued to grow along the Fed’s earlier projected path, it did not reverse the insurance rate cuts, which left the Fed closer to the zero lower bound.

With this latest emergency easing, the Fed is closer yet to the zero bound. We sincerely hope the coronavirus dissipates and that its economic impacts are small, which would give the Fed the flexibility to reverse this action.

The real negative shock to aggregate demand and supply stemming from the coronavirus differs fundamentally from both the financial crisis of 2008–2009 and the oil price shocks of 1973 and 1979. Appropriate policy responses to one crisis are not necessarily appropriate for another. A coordinated and credible response from Washington policymakers is required. 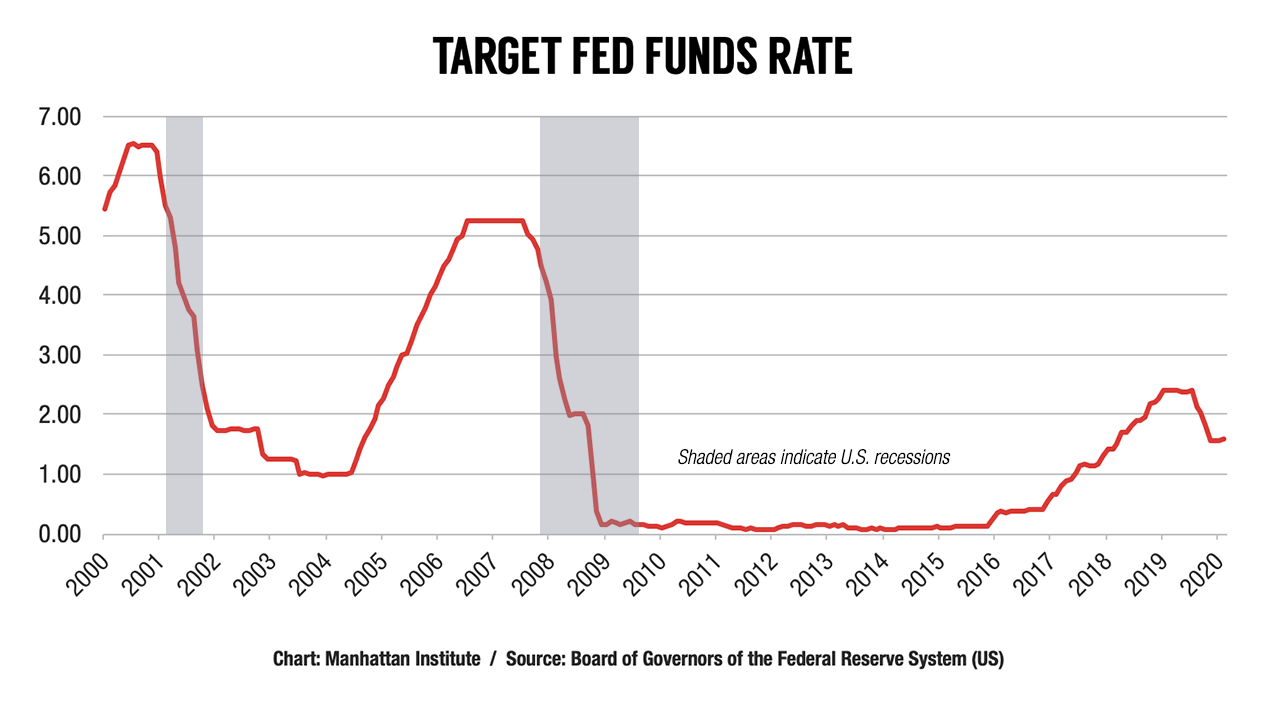 Why is this shock different from all others?

The deep recession of 2008-2009 started with a financial crisis—a temporary virtual halt in the normal functioning of U.S. and global markets that generated panic and uncertainty, leading to extreme risk aversion—whose result was a temporary sharp decline in consumption, business activity, investment spending, and trade. In that situation, aggressive monetary intervention and unprecedented easing was appropriate and necessary. The Fed deserves credit for helping to end the financial crisis and the resulting deep economic contraction. We note that coordinated easing among leading global central banks during that period was critical to the stabilization of financial markets and economies.

The oil shock of 1973 involved a dramatic, nearly 400% spike in oil prices and severe pressure on oil, gas, and energy supplies that stemmed from the Arab oil embargo. The situation was made worse by misguided economic policies (including rationing) that threw the U.S. economy into a deep recession that lasted for six quarters.  Policymakers have learned from those mistakes.

What Test Scores Tell Us About New York City's Students

What Do Mortality Rates Really Tell Us?