With student loan forbearance ending this year, there have been calls from activists and Senators Chuck Schumer and Elizabeth Warren to forgive up to $50,000 of student debt, perhaps with an executive order soon after Biden takes office. But according to the chart below it would be an extremely regressive wealth transfer. It shows average debt levels and income by education levels for Americans under 35 from the Fed's 2019 Survey of Consumer Finances. 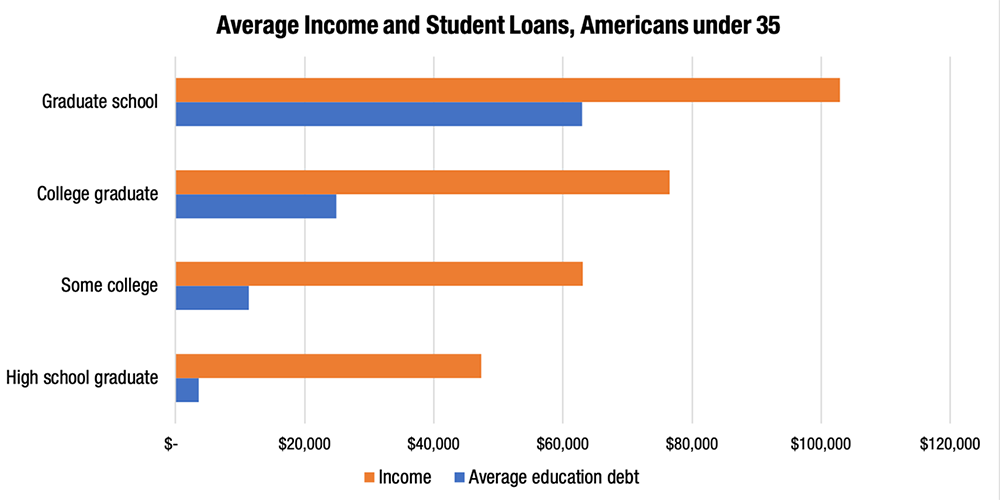 Americans with the highest amounts of debt have more years of education, which tends to mean more income and wealth. Educated Americans also have higher rates of homeownership. 42% of college graduates under 35 are homeowners, compared to 33% of non-graduates. This suggests wiping out debt will not unleash lots of spending and investment, as debt relief proponents argue. There are better, cheaper ways to stimulate the economy.

Student debt is more likely to be a burden for people who don't finish their degree. But the government already has a program that bases payments on income. This program offers relief to those who need it, puts a lower cost on current and future taxpayers and is more progressive.

Interested in real economic insights? Want to stay ahead of the competition? Each weekday morning, e21 delivers a short email that includes e21 exclusive commentaries and the latest market news and updates from Washington. Sign up for the e21 Morning eBrief