Conversations with E21: Edmund Phelps on the Covid-19 Response 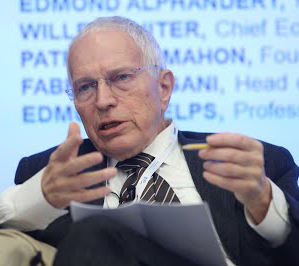 Edmund Phelps, the winner of the 2006 Nobel Prize in Economics, is Director of the Center on Capitalism and Society at Columbia University. He did and continues to do groundbreaking work on unemployment, growth, and innovation. His most recent work addresses how to restore dynamism to the economy.

You recently said the current fiscal policy "isn’t merely the wrong dose, but the wrong medicine altogether." What do you think the ideal policy should be?

I am far from having a grasp of what the ideal policy would be. At this time, I am unconvinced that a general "stimulus" to consumer demand—fiscal or monetary—can be powerful enough to restore consumer demand or even come close to that.

Essentially, I see the economy as being hit by a shock to labor supply or to the contribution that labor can make to the supply of output. It would be hard to find a way to increase the supply of output by operating on the demand side. I can't see how boosting profits creates incentives to call up sick employees.

I like the method that was conceived in Germany and, I think, is being used now. The government is subsidizing employers, large ones at any rate, to pay their employees when they are laid off, since otherwise they would drift off in search of employment elsewhere. At least, I understand the theory behind it (or I think I do).

The unemployment we are seeing now is unlike any we've ever experienced, in terms of its sudden increase, the number of people impacted, and the cause (a government-mandated shutdown of businesses). Your earlier work explained the differences between different forms of unemployment and how these forms change over time. How much of this new unemployment will prove to be structural and how much is due to more transitory effects?

I think this unemployment will prove to be transitory. As fears of the virus dissipate, the economy will tend to rise back to where it was. Consumption demand may be insufficient for a while, since many people will be broke. However, investment demand might rise above where it was, since firms will have lost time in their scheduled expansion programs.

Looking further forward into the recovery, your forthcoming book argues that certain values create an environment where innovation (and growth) prospers. What are they?

They're just the modern values that arose with modernism, as discussed in Mass Flourishing (2013), the power of which is tested in Dynamism (2020). These are the values that emerged from Cellini, Pico, Luther, Cervantes, Shakespeare (in a way), ..., Hume, Voltaire, Kierkegaard, Goethe, and others, and then later Emily Bronte, Mary Shelly, ..., William James, and Nietzsche. They include individualism, vitalism, and self-expression(ism).