Policy wonks and members of the public are quick to note when lawmakers make mistakes or fail to resolve urgent problems. But when lawmakers act correctly or prudently, there tends to be less public commentary. It’s important to notice, though, not just what lawmakers do wrong, but what they get right. One instance of Congress acting prudently on a major public policy question was in 2015, with legislation affecting Social Security’s disability insurance program.

Let’s roll the clock back a few years and look at the situation facing lawmakers in 2015. Social Security’s trustees (of which I was one) had long warned of substantial and growing financing shortfalls in each of Social Security’s two trust funds: one for old-age and survivors’ insurance (OASI) and one for disability insurance (DI). By 2015, the crisis in the DI trust fund had become imminent, with the trustees projecting total depletion the very next year. Had that been allowed to happen, benefit payments for vulnerable disabled Americans would have been immediately cut by nearly 20%.

(Reproduced from the 2015 Trustees’ Report, Expressed as a % of Workers’ Taxable Wages) 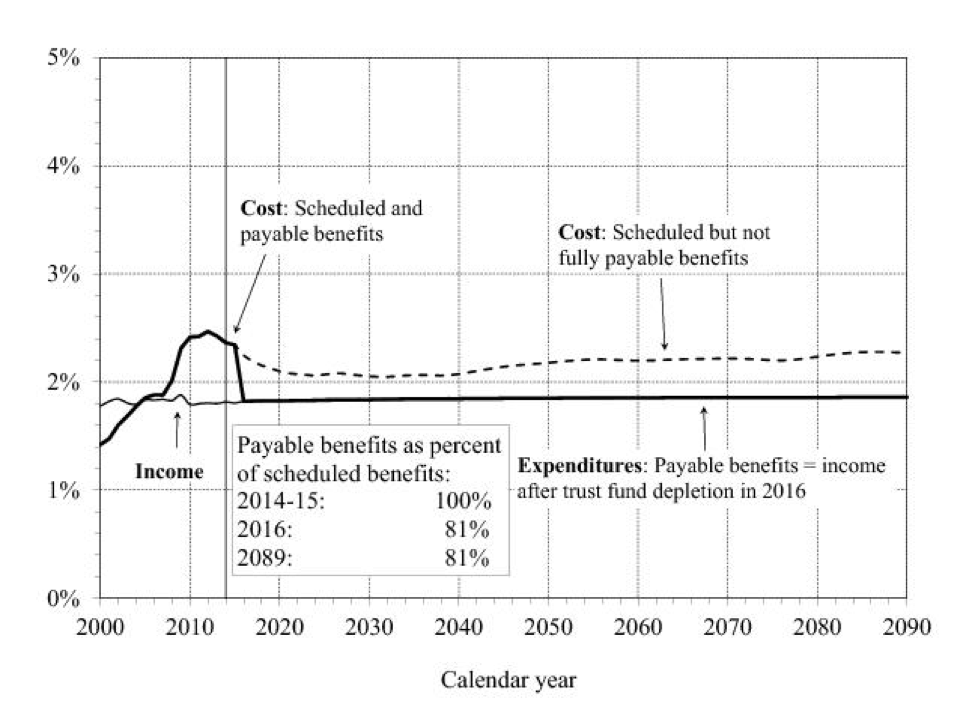 A little more context is needed to understand the conundrum and the pressures facing lawmakers three years ago. Although DI’s trust fund was facing immediate insolvency, Social Security as a whole was badly underfinanced. In fact, even at that time, the program’s old-age (retirement) benefit trust fund faced the more severe actuarial imbalance, as shown below:

While the crisis in the disability fund was arriving sooner, the crisis in the retirement fund was actually larger even then. The main reason DI was hitting the wall first was that the baby boomers reached their peak disability incidence years (their 50s) before they hit retirement age (in their 60s). Of course, there were and are policy challenges unique to Social Security’s disability side, but for the most part, the impending DI trust fund insolvency was simply the first manifestation of broader imbalances that will eventually engulf the entire Social Security program under current law.

Given what lawmakers knew in 2015, the single worst thing they could have done was nothing—i.e., to allow DI to go insolvent and subject the disabled to sharp benefit cuts. No one advocated such irresponsibility. But there were plenty who pressured lawmakers to do the second most irresponsible thing—to simply paper over the problem by reallocating taxes from Social Security’s OASI fund to its DI fund.

There are a number of reasons why this would have been irresponsible. First, as explained above, Social Security’s retirement program is in worse long-term shape than DI, and its shortfall would have been further exacerbated by diverting worker contributions needed to fund retirement benefits. Perhaps more importantly, Social Security’s trustees have been warning for years that its broader financing shortfalls require legislative action to either slow cost growth and/or increase program revenues, in order to restore financial balance. The longer these corrections are postponed, the more difficult it becomes to preserve solvency, and the greater the risks to program participants. Shuffling revenues between the two trust funds purely for the purpose of delaying these necessary corrections would have been a terribly irresponsible decision to jeopardize the well-being of millions of participants and the long-term viability of Social Security’s finances.

Lawmakers faced considerable pressure to do the wrong thing. Various advocacy groups argued (incorrectly) that such tax reallocations were the standard historical method of dealing with an impending trust fund shortfall, which policy watchdogs, including myself, explained was not true. A bill was even introduced to simply combine the OASI and DI trust funds, which would have abandoned the decades-old bipartisan commitment that the disability component of Social Security not be funded at the expense of its retirement program.

Standing up to these pressures, the House of Representatives adopted a procedural rule requiring that any tax reallocation occur only in the context of legislation improving the program’s financial outlook, in keeping with most historical precedent. For taking this responsible course, representatives were subjected to many misleading public attacks.

Later in 2015, lawmakers passed legislation, complying with this House rule, to avert DI fund depletion. The legislation’s fiscal effects were minor, but what the legislation didn’t do was just as important as what it did. The legislation contained a few modest provisions to improve program integrity as well as the finances of both of Social Security’s trust funds, while also effecting a limited reallocation of tax revenues from the OASI fund to the DI fund during the years 2016-18. Under 2015 projections, this would have done just enough to postpone DI fund depletion from 2016 to 2022. Importantly, lawmakers resisted the temptation to reallocate so much in taxes as to push DI insolvency off until the 2030s, which in effect would have given lawmakers greater latitude to neglect Social Security’s mounting shortfalls until it was far too late to fix them.

Fast forward to the present. As it happened, Social Security disability applications dropped significantly during the economic recovery from the Great Recession. This further improved DI finances relative to those of the OASI program. In the latest (2018) projections, the relative shortfalls facing Social Security’s trust funds now look like this:

In other words, while both trust funds are currently projected to be depleted at around the same time, the so-called retirement fund is now in the far weaker financial condition. Had lawmakers buckled to interest group pressure in 2015 and either mixed the trust funds, or diverted even more revenues from the retirement trust fund to finance disability benefits, the retirement fund would now be in even worse shape.

There are important lessons to be drawn from this. It would have been bad policy in any event to redirect retirement fund taxes to the extent interest groups were demanding in 2015, because the retirement fund had its own well-documented problems, and doing so would have further delayed the financial corrections Social Security so desperately needs. But beyond that, it’s important to remember that lawmakers are always dealing with incomplete information. Had they taken such precipitous action in 2015, subsequent changes in disability benefit award trends would almost certainly have required reversing the legislation just a few years later, at least in part.

Congress did the right thing in 2015 by standing up to powerful interest groups and refusing to paper over Social Security’s broader financing shortfalls. Resisting that pressure is the sort of quiet, principled decision for which lawmakers rarely get credit but should.