The U.S. labor market continued a solid performance in August, with a healthy increase in nonfarm payrolls, sustained low unemployment, a big 0.4% increase in average hourly earnings since last month—the best gain this year—and an increase in aggregate hours worked. Businesses are sufficiently confident in the outlook to continue boosting hiring, and households are pocketing higher wages, which should support healthy consumption gains.

Businesses are confident enough in the outlook to continue boosting hiring, and households are pocketing higher wages, which should support healthy consumption gains.

This is the last employment report before the September 25-26 meeting of the Federal Open Market Committee and it keeps the Fed right on track to increase its policy rate with its dual mandate virtually achieved. Amid a sustained low unemployment rate and still-moderate wage gains and sustained economic momentum, some Fed participants may consider lowering their estimates of the natural rate of unemployment and nudging up their estimates of economic growth.

Service sector job growth bounced back by 178,000 in August, its third best gain this year, due to strong increases in trade and transportation employment (+37,000) and business services employment (+53,000). Hiring in truck transportation rose by 6,000, its best gain since March and consistent with very strong demand in the sector amid robust activity in the industrial and consumer sectors.

Hiring in the goods-producing sector moderated in August, with its payrolls up by only 26,000 (the 6-month moving average is 39,000). Manufacturing employment actually fell (-3,000) for the first time since July 2017, a trend that is unlikely to be sustained given the renewed optimism in the sector. Construction jobs rose by a solid 23,000, despite being held back by the very tight supply of labor that is pushing up wages. The rise in oil prices continues to boost hiring in the mining sector (+49,000 in 2018).

The household survey was weak, with its measure of employment falling by 423,000. This series is very volatile from month to month and the decline should be reversed in September. Unemployment, on the other hand, fell by 46,000. The share of voluntary job quits jumped to the highest since October 2000, reflecting strong job-finding prospects from persons who were recently employed. 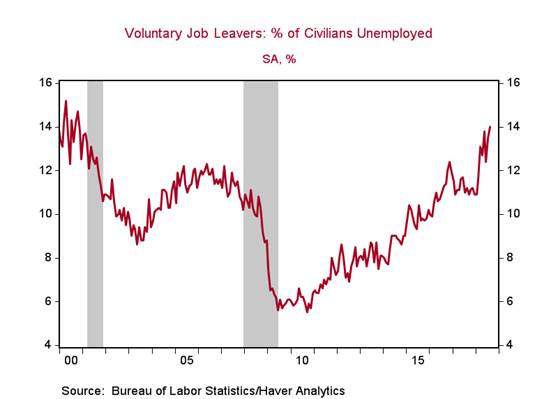 It is too early to declare that the elusive pick-up in wages is here, especially given the possibility of revisions in coming months. But I continue to expect rising wage gains based on strong economic activity and tightening labor markets. Along with the employment gains, the pick-up in wage gains in August boosts disposable incomes and adds to consumer purchasing power.

Along with the employment gains, the pick-up in wage gains in August boosts disposable incomes and adds to consumer purchasing power.

The U.S. labor market is in good shape, reflecting confidence on the part of businesses to boost hiring, and households that continue to grow very confident in job-finding prospects. The best consumer assessment of labor markets since 2001 and the lowest level of jobless claims since 1969 reflect these trends. 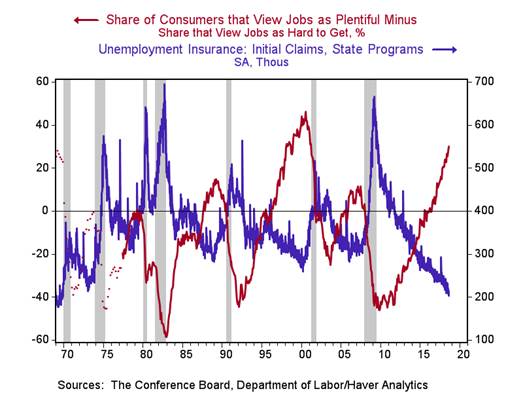